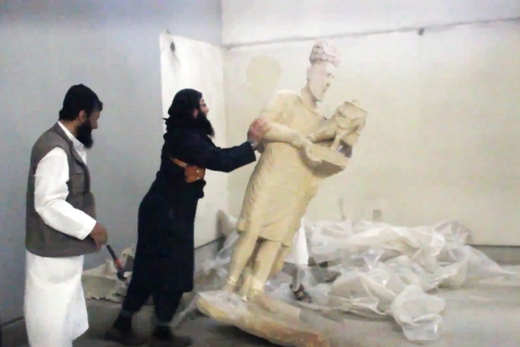 According to a report on Sunday by IraqiNews.com, Daesh terrorists have moved the stolen pieces to their stronghold in the Syrian city of Raqqa.

The museum of Mosul University locates some 405 km north of Baghdad.

The spokesman of Kurdistan Democratic Party in Nineveh Saeed Mamousini said in a press statement obtained by IraqiNews.com, “ISIS militants took these pieces to the city of Raqqa in Syria, in order to sell them later.”

Meanwhile, British national daily newspaper, Guardian, has referred to Daesh attack on the Iraqi priceless statues and artifact as a move which “threatens to upend millennia of coexistence in the Middle East.”

“The birthplace of human civilisation … is being destroyed”, said Kino Gabriel, one of the leaders of the Syrian Military Council – a Christian militia – in a telephone interview with the Guardian from Hassakeh in north-eastern Syria.

In a five-minute video, which was released by the “press office of the province of Nineveh [the region around Mosul]”, a Daesh representative speaks to the camera, condemning Assyrians and Akkadians as polytheists, justifying the destruction of the artifact and statues, it noted adding that Daesh terrorist took control of Mosul last summer in a lightning advance that led to the eviction of thousands of Christians and other minorities from their ancestral homelands in the Nineveh plains, amid reports of forced conversions.