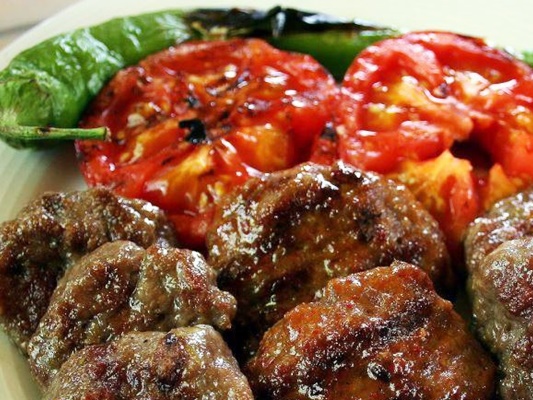 The coriander kebab is a traditional food made in the city of Maku and Azarbaijan region, northwestern Iran.

The food is comprised of little meatballs with gravy and is served with bread. Some people enjoy cutting the bread into pieces and putting it in the gravy to eat it like broth. Moreover, the coriander and dried limes in the food give it a pleasant and appetizing aroma.

Liquid oil: as much as needed for frying

Now put the other half of the onion with the cooked lentils in the mixer and mix them until they are mashed, too. Then add the mix of mashed onion and lentils to the beef and onion already inside the bowl. Mix them with your hands well.

Then add salt, pepper and turmeric as much as necessary to give some taste to the whole thing. Now it comes to the eggs; break the eggs and add them to what is in the bowl and mix them well. Now the mix is ready to be shaped into meatballs. The reason why we add eggs is that they make the mix sticky and keep it from falling apart.

Bring a small frying pan and put some oil in it. Put the pan on the oven until hot. Sauté the chopped coriander in the oil.

Fry the chopped onion until it is golden in colour. Then add a spoonful of flour to it and mix it with the fried onion. Now sauté it.

Afterwards, add the lentil water and mix an additional cupful of water. Now, break the dried limes before piercing them with a fork. Now put them in the casserole.

After the water begins to boil and the dried limes inside get boiling, add the sautéd coriander and allow it to remain on the fire for 15 minutes. Then add the fried meatballs to the mix of dried limes and coriander and allow the whole thing to remain on the flame for another 4 to 5 minutes, so that the meatballs will be cooked through as well. Now the food is ready.