The controversy a speech on the floor caused 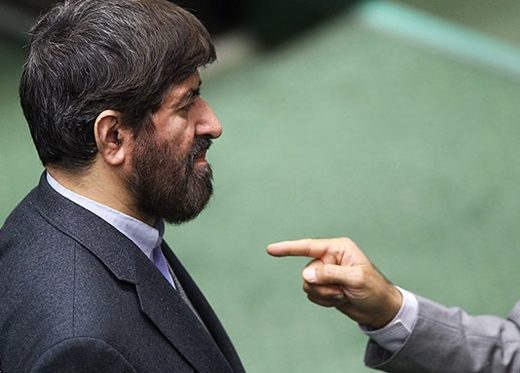 Newspapers and MPs with different political leanings have reacted differently to Ali Motahari’s comments that sparked a brawl in parliament.

The contentious comments of Ali Motahari, a principlist MP, on parliament floor on Sunday (January 11) sparked a brawl that disrupted the legislative proceedings.

Ali Motahari led off his speech with a condemnation of terror attacks on journalists in France, saying, “We condemn the recent terror attacks in Paris, although repeated publication by the satirical magazine Charlie Hebdo of cartoons of the Prophet is condemnable too.”

On domestic issues, he said, “As everybody knows on December 30, 2009 [the day Iranians turned out in force to renew allegiance to the Supreme Leader and the ideals of the Islamic Revolution] people defended the revolution and the Islamic Republic despite violations committed by the two sides of the Sedition. If we try to make December 30 a symbol of division of the nation, it will not be a Day of God anymore….”

A call on the president

That comment pushed up tension levels in the chamber and finally led to physical efforts by some MP to force Ali Motahari to stop his speech.

Motahari went on to say, “Everybody knows that I’m not attached to Messrs. [Mir-Hossein] Mousavi and [Mehdi] Karroubi. Actually I voted for Mr. [Mohsen] Rezaei in the 2009 election.”

He added, “I want to defend a bigger issue and that is the Islamic treatment of the government’s critics as Imam Ali (PBUH) acted in dealing with his opponents. His critics and opponents stayed free and enjoyed full social rights as long as they did not take up arms. Imam’s opponents would criticize him in the mosque as he delivered his sermons, and Imam would not let anybody attack them.”

Shouts of protest by the MPs quickly turned into slogans against the son of Ayatollah Motahari, and chants of ‘Down with the seditionist’ and ‘Down with the hypocrite’ soon echoed in the chamber.

He then put forward a proposal on how to end the controversies surrounding the 2009 incidents and said, “The solution is this: we should confess to our mistakes in 2009, among them a lack of proper reaction to [televised] debates, announcement of national celebrations […]”

The rush of deputies toward parliament’s pulpit to bring down Ali Motahari was so forceful that Abed Fattahi, Nader Ghazipour and Mesbahi Moghadam formed a human wall between Motahari and the attackers calling on him to stop his speech. Some MPs were even trying to get into a physical fight with him.

At this time, the deputy speaker who presided over Sunday’s open session turned into a critic of Motahari’s remarks. Telling Motahari that what has been done to these two people [Mousavi and Karroubi] has come with maximum compassion.

Mohammad Hassan Aboutorabi Fard objected to the remarks by saying, “Raising the issue this way will draw the protest of MPs who are here to represent people. You are expected to take into account our national interests, religious orders and the Constitution.”

Following the attack by the MPs, the deputy speaker ordered the end of the open session.

What does the Constitution say?

For instance, Javan, a principlist daily which represents the viewpoints of the Islamic Revolution Guard Corps, wrote, “The behavior of Ali Motahari shows that his radical views have been taking him down a very steep slope over the years. He now dares talk audaciously against the beliefs of the people.”

Javad Jahangirzadeh, an MP representing Orumiyeh in the Islamic Consultative Assembly, said, “Those who seek to undermine the December 30 epic should know that December 30 is a Day of God and will remain so.”

Kayhan, another principlist daily, said in its editorial, “What Motahari says every once in a while, like his comments on January 11, draws a very warm welcome from American and Zionist media and admiration from anti-revolutionaries.

“What he said this time around is nothing new. Others have made similar remarks time and again in the past without drawing much attention from the enemy and anti-revolution circles. No doubt, it is not his comment that makes him important to the enemy. What is important is that he is associated with Ayatollah [Morteza] Motahari.

“Anti-revolutionaries and the media affiliated to them have without fail identified him as ‘Ali Motahari, the son of Ayatollah Motahari’. Hardly can you find one medium which has not associated him with his esteemed martyred father.

“So one can easily conclude that without association with Martyr Morteza Motahari, Ali Motahari would be unimportant to the same media which are now hailing him.”

Some MPs and newspapers defended the conduct of Ali Motahari. For instance, Abdolvahid Fayazi, who represents Nour in the chamber, said, “Such incidents damage the reputation of the assembly and play into the hands of foreign media which are always bent on undermining the Islamic establishment.

“In defending what they had done, some deputies alleged that Mr. Motahari had charged them. He continued his speech as calmly and politely as possible. His bravery is praiseworthy.”

Mohammad Bagheri Bonab said, “Mr. Motahari just expressed his views. If other deputies had objections to what he was saying, they should have waited their turn to express their objection. They shouldn’t have made the atmosphere tense. Besides, the presiding board could have acted better in bringing things under control.”

And Masoud Pezeshkian, who represents Tabriz in the Islamic Consultative Assembly, said, “The presiding board and MPs failed to abide by the law. Parliament should be above such incidents. MPs should have allowed Mr. Motahari to complete his speech. […] What happened yesterday seemed to be much of a show to secure qualification [from the Guardian Council ahead of next parliamentary elections.]”

According to Tuesday’s edition of Arman-e Emrooz daily, on January 12 Parliament Speaker Ali Larijani told reporters, “There are more important issues in the country we need to address, the less tense the atmosphere, the better the MPs can focus on settlement of issues. It [contributing to creation of a calm environment] is a national duty.

“We need to create a calm atmosphere in the assembly. Media can play an effective role on that front. As the Supreme Leader has said calm and harmony are necessary for the country.”

In response to a question as to whether the Presiding Board has received a complaint, he said he was not aware of any such thing.

But Safar Naimi-Raz, who represents Astara in the chamber, said more than 50 MPs have filed a complaint against Motahari with the board that supervises the performance of the deputies.

He went on to say although he was the one who was involved in the dispute with the principlist MP, he had not signed the letter of complaint.