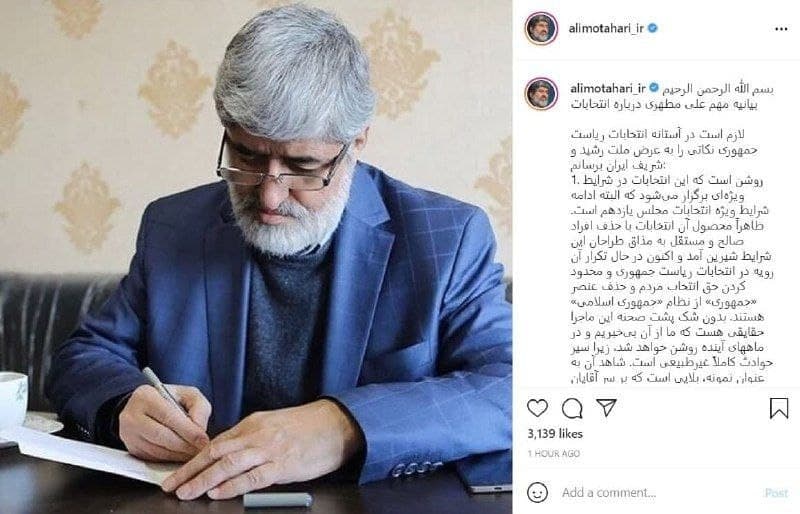 Ali Motahari, the former deputy speaker of Iran’s parliament, has officially backed Abdolnasser Hemmati as his favoured candidate in the Friday presidential elections.

Motahari is a moderate member of the principlist camp which has thrown its weight behind Hemmati’s rival Ebrahim Raisi.

“In the current situation of economic pressure, I consider Mr Hemmati as the most appropriate among the seven respectable candidates, seeing that he has held executive economic positions for years, has his hand on the pulse of the national economy and during the recent [US] economic war, is remembered for his all-out fight with the criminal [former US President Donald] Trump and prevented the country from becoming a new Venezuela,” Motahari said.

“Considering his emphasis on relations with the world and its impact on removal of sanctions, revival of the Joint Comprehensive Plan of Action and improving people’s livelihoods plus the significance he attaches to the rights of people and chapter three of the constitution and his right cultural view concerning respect for Islamic teachings and people’s basic freedoms, as well as his ability to get enough votes, with the help of the people, to push the elections into run ups, I ask the dear nation to vote for Mr Hemmati on Friday to improve the economic situation of the country and avoid constraints on people’s freedoms.”

Motahari also took an indirect swipe at the Guardian Council for how it vetted the presidential hopefuls. He said the election is a test for the zeal of the nation, a test given by “those who have plotted against the people and want to see whether they can continue on their path to remove the Republic element [in Iran]”.