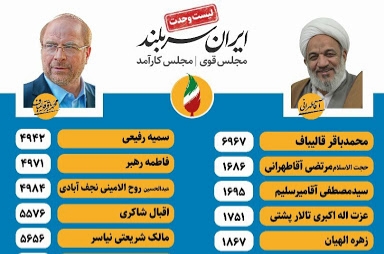 An elite group of Iranian principlists, known as the Forces of the Revolution, have finally reached a consensus on forming an alliance to secure all of the 30 parliamentary seats allocated to Tehran, just a few days ahead of the election day.

In the late hours of Tuesday night, February 18, the coalition council of the Forces of the Revolution arrived at a consensus about a “unity list”, including 30 principlists.

The list, whose top name is Mohammad Baqer Qalibaf, the former mayor of Tehran, was hammered out after several rounds of debates between the Forces of the Revolution and another group of principlists, dubbed the Front of Islamic Revolution Stability.

The 30-strong list that has been finalized just three days before the election day was a last-ditch effort by the principlists to win all of the 30 seats in the national legislature allocated to Tehran electoral district, which includes the regions of Tehran, Ray, Shemiranat, Eslamshahr and Pardis.

The momentous decision from the principlists came against a backdrop of failed attempts by the reformists to conclude an agreement on a single list of candidates.

The election campaigns in Iran formally began on February 13 and ran until 8 am this morning, February 20.

The countrywide votes for the parliament and the midterm election of the Assembly of Experts will be held simultaneously on Friday, February 21.

A total of 7,148 candidates have gone through a formal qualification process by Iran’s Guardian Council to run for the Parliament. They include hundreds of women and citizens from the religious minorities.

There are 290 seats in the parliament up for grabs. In capital Tehran, 1,453 candidates are contesting one of the 30 allocated seats. 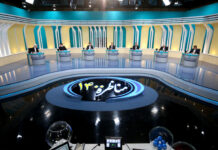