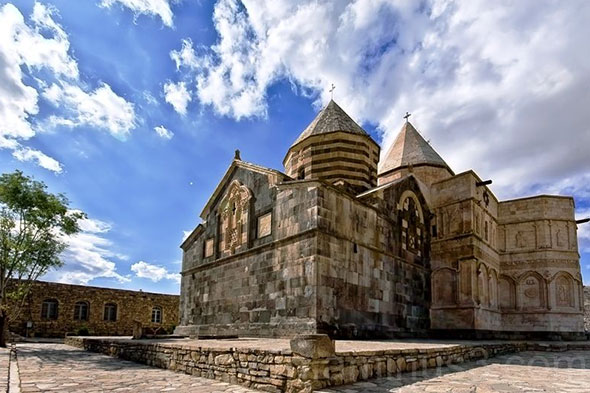 Up to 7,000 Christians get together for the 60th anniversary of regular yearly visits to Saint Thaddeus Monastery or Ghara Kelisa in northwestern Iran.

A 3-day ceremony (July 31 – August 2) marked 60 years since Christians began to pay regular yearly visits to the Saint Thaddeus Monastery or Ghara Kelisa – Literally “The Black Church” – in West Azerbaijan province, northwestern Iran. The following is an excerpt of a report on the event by the online edition of Alik Newspaper available at alikonline.ir.

Between 6,000 and 7,000 people took part in the three-day event which is organized annually by Azerbaijan Armenian Caliphate Council. Pilgrims and tourists from around the country attended the ceremony at the church complex run by the Cultural Heritage Organization.

The panel organizing the event had set up a tent town nearby to accommodate the visitors during their three-day stay in the province. Organization of a photo exhibition and artistic programs on the sidelines of the event made it more attractive, particularly for the youth.

On August 1, Chaldoran Governor Karim Hosseinzadeh and a number of provincial officials visited the site of the ceremony and held talks with Grigor Chiftchian, the Bishop of Armenians in Western Iran.

In a speech, the Armenian bishop said the signal these yearly visits send to the world is that followers of the Muslim and Christian faiths are living side by side in peace in Iran. “Don’t act contrary to what your conscience orders you to do. Like in the past, we can have peaceful coexistence. That is what we are doing now in the Islamic Republic of Iran. Countries are not meant to be exclusively inhabited by followers of a single faith,” he said.

The bishop went on to say, “Let’s practice patience in accommodating those who hold opposing views. Let’s respect each other’s religious differences. Let’s join hands to turn up the heat on terrorism, murder, massacre and destruction. Thanks to the support the Islamic Republic of Iran has lent to the Saint Thaddeus Monastery, it is now back on its feet. I would like to thank all state officials including the Supreme Leader, the president and the governor for their backing.”

At the close of the ceremony, the torch of the Armenian games, which are to open in Tabriz on August 14, was lit by Bishop Chiftchian before it began its journey to the capital of East Azerbaijan Province.