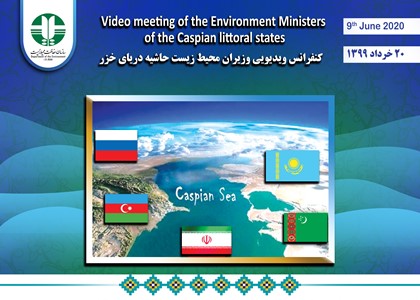 Environmental officials from the five Caspian Sea littoral states have attended an online meeting on the ways to protect and preserve the marine environment at the world’s largest lake.

Official from Iran, the Republic of Azerbaijan, Russia, Kazakhstan and Turkmenistan took part in a video conference on Tuesday, June 9, to weigh plans for the protection of the Caspian Sea environment.

In an address to the meeting, head of Iran’s Department of Environment Issa Kalantari pointed to the “bitter experience” of protection of environment in the Persian Gulf south of Iran, saying, “Since the Persian Gulf littoral states lack the sufficient political will to protect it, we are facing hundreds of environmental problems today.”

The Iranian vice president also expressed hope that the Caspian Sea states would have the will to preserve the marine environment, adding, “Iran is located in the southern side of the Caspian Sea, thus pollution from the other countries enters our coasts.”

If the secretariat of Tehran Convention had pursued the environmental issues on a daily basis, the Caspian Sea problems would have not accumulated, Kalantari added, calling for efforts to protect the sea for the future generations.

“A bilateral agreement would not settle the Caspian Sea problems. I hope an active secretariat would be established immediately, and that we could reach an agreement in the sixth conference, which will be held in Baku,” he noted.

The Iranian official also said the United Nations Environment Programme can greatly help devise plans for the protection of the Caspian environment with 50 years of experience, adding, “All countries must work in cooperation to address the Caspian Sea problems, including various types of pollution and biodiversity.”

The Iranian vice president then proposed the formulation of a 10-year program to address the environmental and genetic issues relating to the Caspian Sea pollution.

“We should not waste the time. I suggest that we should ratify a 10-year plan on Caspian environment in the Baku conference and settle the Caspian Sea problems through collective monitoring, so that we could turn the sea into an exemplary sea in the world from the environmental aspect,” Kalantari stated.

He further expressed hope that the secretariat of Caspian Sea conference would learn lesson from the Regional Organization for the Protection of the Marine Environment (ROPME) in the Persian Gulf and Sea of Oman, and not end up as an ineffectual organization.

“I insist that the sixth meeting should be immediately held in Baku to make final decisions about protection of the Caspian Sea,” head of Iran’s Department of Environment concluded.