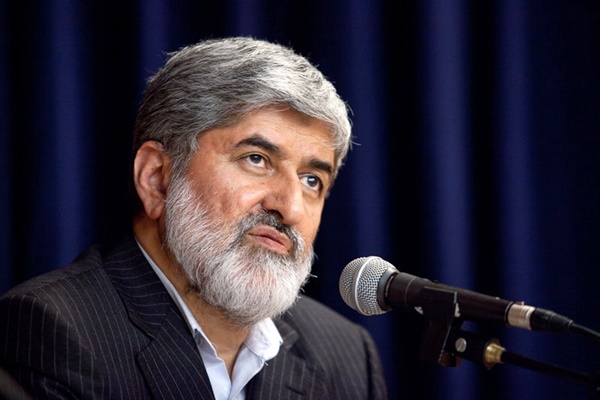 The cancellation of an Iranian lawmaker’s planned speech in Iran’s northeastern city of Mashhad has led to widespread reactions by the government and the Parliament.

According to media reports translated by IFP, Vice-Speaker of Iranian Parliament Ali Motahari was due to deliver a speech in Mashhad, but it was called off based on an order by provincial prosecutor.

Mottahari, who is known as an outspoken MP, was going to speak about the religious occasion of Arbaeen; however, the speech was cancelled in spite of the large audience attending the conference hall.

Seyyed Massoud Mohavvelati, a senior provincial official, told ISNA that Motahari’s speech was going to be focused on the issue of Arba’een mourning ceremony and there was no problem with the event.

“Since he was the Parliament’s vice-speaker, and his speech was on a religious topic, the Governor’s office issued the required licence for the event to be held in one of conference halls of Mashhad,” he went on to say.

“On Saturday night, Motahari arrived in Mashhad [where he was going to deliver his speech on Sunday morning], but the Judiciary official [the prosecutor] called off the event.”

We sent a letter [to the prosecutor’s office] and announced that there is no problem with the speech as Motahari is going to talk about Arba’een, but they didn’t agree,” Mohavvelati noted.

As one of the first reactions to the cancellation, the reformist lawmaker Mahmoud Sadeqi said in a post on his Twitter account that the cancellation of Motahari’s speech is a fault of the governor-general of Khorasan Razavi Province, and that the Interior Minister Abdolreza Rahmani Fazli should be held accountable.

In reaction to the cancellation, Rahmani Fazli expressed his regret over the move, and stressed that he has ordered his political deputy to form an investigation team to probe into the issue.

“In case of any violation of law by government executives, they should be seriously punished, and if the decisions have been made beyond the authority of the government and the Interior Ministry, a report should be prepared and sent to high-ranking officials,” Rahmani Fazli said, as reported by Tasnim.

If any executive has violated the law, he should be punished, and if the decisions have been made beyond Government’s authority, a report should be prepared on the issue and sent to high-ranking officials, Interior Minister said.

However, what made the situation more serious was Motahari’s explicit and immediate reaction to the issue.

News agencies on Sunday published a letter by Motahari to President Hassan Rouhani, in which he revealed that his speech had been called off based on a letter received by prosecutor of Mashhad.

“Those who are responsible in this regard are the governor-general and the Security Council, but they seem to be powerless,” Motahari went on to say.

He further asked President Rouhani to clarify “who rules Khorasan Razavi Province: the governor-general or the prosecutor and Friday Prayers Imam?”

“Is the Law Enforcement working under the command of governor-general or the prosecutor?”

“I’m not sure whether these ISIS-like moves against the Islamic Revolution are being made intentionally or out of ignorance,” he noted.

Cancellation of legal events are like what the ISIS terrorist group does, outspoken MP Motahari said.

Office of Ayatollah Alamolhoda, the senior cleric in Mashhad, later showed reaction to Motahari’s letter, “Ayatollah Alamolhoda do not care about such speeches and ceremonies, and preserves the right to take legal action against the person who raised accusations against him.”

Alamolhoda’s office further threatened that Motahari will be sued if he does not take back his words.

Hours after the speech was cancelled, MPs other than Sadeqi showed reactions to the issue.

All officials have the right to speak in public places, and no discrimination in this regard is acceptable, senior reformist Aref said.

In a post on his Instagram page, senior reformist Mohammad Reza Aref warned against the violation of rights that are clearly outlined in Iran’s Constitution.

All officials have the right to speak in public places, and no discrimination in this regard is acceptable, he added.

Abdolkarim Hosseinzadeh, Fatemeh Saeidi, and Fatemeh Zolqadr were among other lawmakers who showed reactions to the issue.

In a post on his Twitter account, Hosseinzadeh referred to the concerts cancelled in Mashhad based on Alamolhoda’s decrees, and said, “Was Motahari’s speech also considered a concert that was called off?”

President Rouhani also used Twitter to harshly criticize the cancellation, and described it as “a shame”.

“The cancellation of Ali Motahari’s speech in Mashhad is embarrassing. I have ordered the Interior Minister and Justice Minister to identify and name the ones who violated the law,” Rouhani said.

“The Governor-General and the Provincial Security Council, in cooperation with the Law Enforcement and security officials, are responsible for protecting legal gatherings and supporting freedom of speech,” he added.

“By infiltrating into sensitive posts, some people want to shut the mouths and cancel the speeches of others, and prepare the grounds for radicalism and dichotomy within the society,” Rouhani went on to say.

According to a report by ICANA, Parliament Spaker Ali Larijani also said on Tuesday that the prosecutor’s move to call off the event was regrettable.

“Provincial Security Council is the body responsible for such issues. Even if the prosecutor knew that the event would face security problems, he should have raised the issue in the Council and let them decide,” he added.

“I don’t want to make final judgement, because I haven’t heard the prosecutor’s comments yet, but even when I asked the Judiciary Chief [Ayatollah Amoli Larijani] about the issue, he said that the prosecutor should have let the Security Council decide about the event,” Larijani noted.

“Under the current sensitive circumstances, such behaviours are not at all in the country’s interests,” the Parliament Speaker added.

In the latest development, Motahari’s lawyer announced on Tuesday morning that a lawsuit has been filed against the prosecutor of Khorasan Razavi province following the cancellation of his speech.

According to ILNA’s report, Mostafa Tork Hamedani said the lawsuit was filed on Tuesday and submitted to the Special Court for Government Employees.