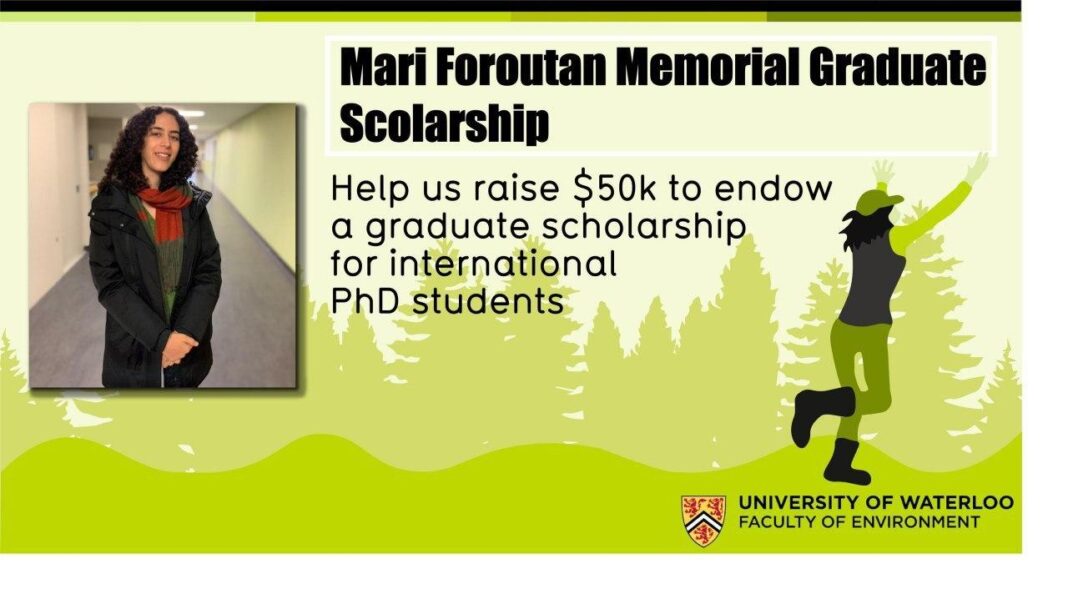 The University of Waterloo in Canada’s Ontario and Iran’s Sharif University of Technology are planning to establish scholarship funds in memory of some of the elite passengers of the Ukrainian plane which was downed in Tehran last month.

Members of the Academy of Sciences, School of the Environment and Geography of the University of Waterloo, Canada, have decided to establish the fund in honour of the scientific efforts of Marzieh Foroutan who lost her life when the Ukrainian airliner was mistakenly shot down by Iran’s air defence.

Marzieh Foroutan (Marry) had moved to Canada four years ago. She had received her bachelor’s and master’s degrees in soil and natural resources engineering from Shiraz University. He went to Alberta State University of Geography and the city of Calgary for graduate studies.

She stayed in Calgary until receiving her PhD. While studying in Calgary, the Waterloo University gave Marry the opportunity to pursue a further career in the field of “Climate Change and Conservation of Water in the World”.

Maryam Latifpour, Director of Scientific Advancement at the University of Waterloo’s Faculty of Environmental and Geographical Development, was one of the first to think of awarding a prize to commemorate her classmate Marry. She knows Marzieh very well, saying “Marry was so smart that I could tell her she was a genius. Creativity must also be added to her characteristics. She was a very creative person. Perhaps we can say one of the most creative members of our group. Marry can be considered a member of the environmental community who spent the last years of her life researching on Water Supply and Preservation. She was a member of the World Future Water Program; a plan to provide governments, businesses, and even communities with the tools needed to manage the risks posed by the threats to water supply and quality in Canada.”

Marry, as a scientist with this global program, often spent her time around the lakes south of Ontario. She was also a member of a research program on the lakes of Mars that was supposed to answer the question of whether humans can eventually live on Mars for long.

The University of Waterloo announced recently that it has set up a scholarship in her name to keep Marzieh Foroutan’s name remembered. The scholarship, of course, is granted with the direct permission of Foroutan’s family.

“We decided to raise 50,000 dollars a year to keep Marzieh Foroutan’s name remembered at the University of Waterloo. This amount will be awarded to international students who want to study for a doctorate in the Faculty of Environment and Geography at Waterloo. Anyone can donate about 20 dollars to be part of this scholarship,” said Latifpour.

Hours after the tragic crash, officials at Iran’s Sharif University of Technology also announced they want to set up a memorial service for 16 students who had studied at the university’s various faculties.

“The least we could do was a memorial service for the victims,” said Mahdi Fotouhi, President of Sharif University of Technology.

“However, we are planning to place a monument at the university to commemorate 16 of our late students. Granting scholarship is another measure to be established at Sharif. We plan to grant a number of scholarships with the support of Iran’s National Elites Foundation to commemorate the lost ones annually,” he added.

On January 8, the Boeing 737-800 plane belonging to Ukrainian airline abruptly plunged to the ground about two minutes after takeoff from Tehran, killing all 176 aboard. Iranian officials announced that the plane was mistakenly downed by IRGC air defence forces.