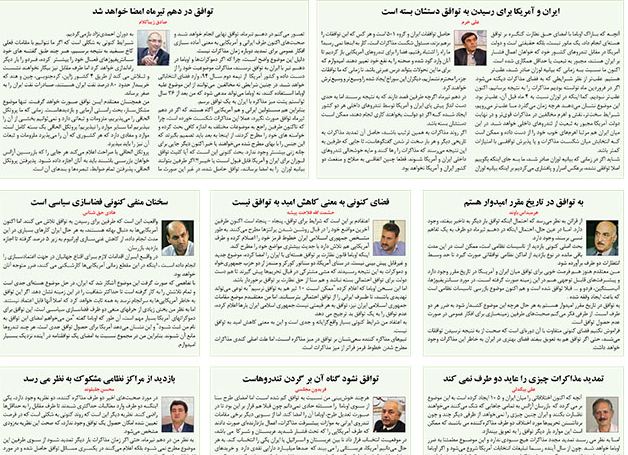 Aftab-e Yazd has conducted a poll on Iran’s nuclear talks and the possibility of a final deal. Several Iranian experts have weighed in.

With five weeks to go before a July 1 deadline, nuclear talks between Iran and P5+1 have entered a critical stage with the two sides expressing optimism that a final deal seems to be on the horizon. Nonetheless, new differences have emerged between Iran and the US in the drafting of a comprehensive nuclear deal.

Aftab-e Yazd daily has asked international relations experts to weigh in on the latest developments in nuclear talks. The reformist daily raised the following questions: Can we be hopeful about the conclusion of an agreement? How can the recent differences between the parties to the talks affect the process? Will the talks be extended again?

What comes below is the translation of excerpts of what the experts said in response to those questions:

Iran and US hands are tied in nuclear agreement

We are now farther back than where we stood on April 2 when the Lausanne statement was released. […] As time goes by, we fall farther behind and face tougher conditions, opponents of the talks gain ground and the US administration comes under increasing pressure to succumb to hardliner demands. […]

If the current trend persists, nuclear talks will extend and they get tougher in the process. The obstacles which crop up may make the parties involved come to the conclusion that they’d better break off the talks, and this will see hardliners in Iran and the US take pleasure in the inconclusiveness of the talks. Certainly this does not serve the interests of Iran or the United States.

Nuclear agreement will be signed by July 1

[…] If President Obama and fellow Democrats fail to reach an agreement with Iran by July 1, nuclear talks will be taken off the agenda and the US will go into election mood as of the second half of the Iranian year [September 2015 – March 2016].

At the current situation, the opponents cannot use the inconclusiveness of the talks against Obama; nor can the US president claim that he has managed to sign an agreement with Iran at the negotiating table after 36 years [of estrangement].

Now there is no room for more bargaining. A question arises here as to whether or not Iran and the US approve of the general framework of the Lausanne agreement? If parties to the talks can sign the statement they released in Lausanne, an agreement will be produced. If not, Iran will return to the period when Ahmadinejad was president.

I’m hopeful about an agreement by the deadline

I’m hopeful about Iran and P5+1 reaching an agreement by [July 1] deadline. Lengthy talks will not serve the interests of either side. I think the remarks the two sides make aim to prepare public opinion for a situation in which no agreement is produced.

We need to bear in mind that the current situation is different from the period in which the talks were believed to be headed for a breakdown. Even if the [nuclear] agreement is kept on hold, a more positive atmosphere will be created in Iran thanks to the talks.

The current atmosphere does not mean we are less hopeful

That Obama has signed the congressional Review of Iran Nuclear Deal Bill into law is not a new and unpredictable issue. […]

In my opinion, the current conditions are serious and realistic; this does not mean that hopes for reaching an agreement have disappeared.

The fact of the matter is that the two sides are trying to arrive at an agreement. But now the Americans are looking for an excuse [to obstruct the talks]. For its part, Iran has taken several measures [in good faith], among them reduction of the level of uranium enrichment to less than five percent and agreeing to UN inspections.

If the Lausanne agreement fails to be finalized thanks to the [measures taken by the] Americans, it will show to the whole world that they are not trustworthy at all.

All in all, I am very much optimistic about inking a [final comprehensive nuclear] agreement in the not-too-distant future.

Extension of talks earn the two sides nothing

Extension of the talks seems to be of no use. This will be definitely to the detriment of Obama, because the election campaign officially gets in full swing in the United States next year. If Obama had not sought an agreement, he would not have accepted to get engaged in nuclear talks.

Obama is under pressures now and has to set a different tone. Earlier he had announced that extra issues such as missile purchases and ties with Israel would have nothing to do with the talks, no strings attached. But Mr. Obama has set a new condition today, talking about a change in Iran’s regional policies.

Although talks are likely to be extended, passage of time will earn the two sides nothing. Rather, the two sides should solve their problems soon.

Hardliners are to blame for failure to ink an agreement

Although I am now less optimistic about the conclusion of a deal, I do not view Obama’s signing of a Senate bill into law as something critical, because Obama was supposed to sign the bill earlier if it were toned down.

As the talks were moving forward, certain hardline Iranian officials resorted to obstructionism, forcing the American side – which is under pressure from Saudi Arabia and its allies – to choose between Saudi Arabia and Israel on the one hand and Iran on the other.

The possible inconclusiveness of nuclear talks can be blamed on what the hardliners did which helped Netanyahu achieve his intended goal. When confidence-building measures were needed, the hardliners started to make threats.

Inspection of military sites is a new suspicious question. IAEA chief Amano’s reading of the Additional Protocol is a problem too. There are still outstanding issues as to whether just nuclear sanctions or all sanctions should be lifted. Removal or suspension of sanctions and the way UN experts will inspect the Iranian sites are the bone of contention too.

We should wait to see if the outstanding questions can be removed in the remaining time before the conclusion of a nuclear deal.