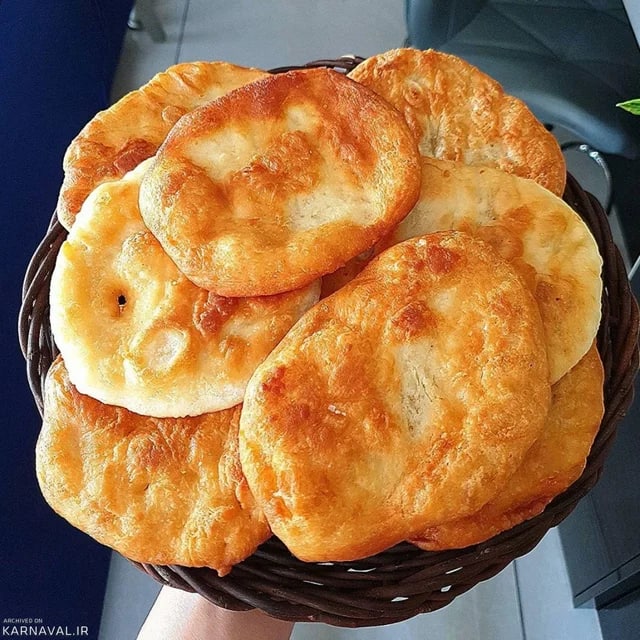 Borsaq is a delicious type of bread native to Kurdistan province in western Iran.

The bread is made with ingredients such as milk, sugar, flour, oil and eggs. In order to make the Borsaq bread, these ingredients are mixed to form a dough, which is then formed into a flat, round-shaped piece and fried.

It is noteworthy that the people of Kurdistan make this bread in two forms: the type filled with things like walnut powder, fennel power, dried mulberry powder, etc., and the plain type.

Ingredients for the plain Borsaq bread

Flour: Around one kilogramme

Frying oil or solid oil: As much as needed

Mix all the ingredients to get a dough. If the dough sticks to your hands, add enough flour to keep it from sticking to the hand. Then keep kneading the dough until you get a consistent mixture.

Wrap the dough in cellophane bags and let it stand in a rather cool place for one day until it rises. If room temperature is so high that the dough may turn sour, you can put the dough in the bottom floor of the fridge.

Take pieces as big as walnuts from the dough, which has risen fully, put them on the backside bottom of a copper frying pan already covered in flour, and make the pieces flat, but not too thin, using a rolling pin or your hands. Then fry them in rather hot oil.

Animal oil: Half to two thirds of a glass

Turmeric: One to one-and-a-half teaspoonfuls

Egg yolk: one or two

Mix flour, salt, sugar, baking powder, fennel and turmeric in a deep container. Then add oil to the mixture and rub the ingredients with the palms of your hand well to prevent them getting lumpy.

Then fold in milk and knead the dough well (10 to 15 minutes) until you get a consistent dough. If the dough is hard, add some milk. Cover the dough with cellophane and put a clean handkerchief on it before letting the dough stand for two hours.

Take some dough the size of a small apple, put in on the palm of your hand, fill its inside with two to three spoonfuls of walnut powder, cinnamon and dried mulberry powder. They bring the edges of the dough together and move the dough on your palm a little bit to make the dough round-shaped. Afterwards, spread the dough on a cooking board using a rolling pin until the dough is 1.5 to 2 centimetres thick. Rub whisked yolk, or sprinkle fennel or Sesame seeds on it before putting the dough in the oven and leaving it at a temperature of 180 degrees centigrade for 15 to 20 minutes. Then put it in the oven’s warmer until its surface gets golden in colour.

As with the recipe for the plain Borsaq bread, here you may also fry the bread instead of using the oven.