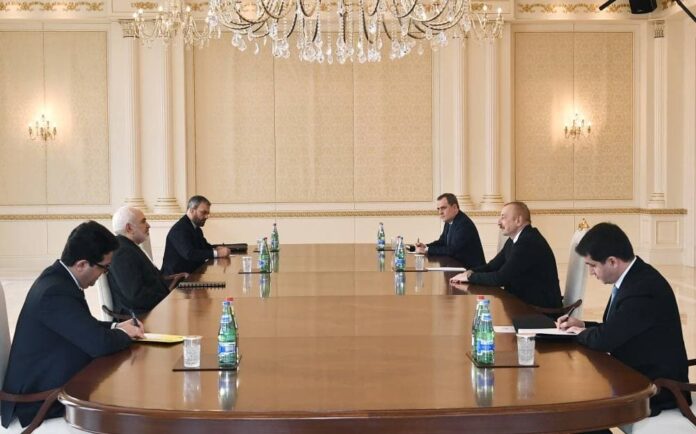 Iran’s Foreign Minister Mohammad Javad Zarif held a meeting with President of the Republic of Azerbaijan Ilham Aliyev in Baku on Monday.

The top Iranian diplomat, who is visiting Baku in the first leg of a tour of the Caucasus and Turkey, held talks with Azeri President Aliyev on Monday morning.

In the meeting, Foreign Minister Zarif congratulated the Republic of Azerbaijan’s people and government on the recent victories, stressing the need for the promotion of cooperation between the two neighbours.

He also welcomed a six-party regional cooperation initiative proposed by the president of the Republic of Azerbaijan, expressing Iran’s readiness for help and cooperation in any field contributing to regional peace, stability and calm.

Zarif then pointed to the successful visits that Azerbaijan’s Minister of Foreign Affairs and Deputy Prime Minister paid to Iran, saying the mutual cooperation, particularly in the economic fields, is ready to make a leap.

The top diplomat also expressed delight with the results of the 14th meeting of Iran-Azerbaijan Joint Commission on Economic Cooperation, voicing Iran’s readiness for active participation in the process of reconstructing the recently-liberated Azeri lands, particularly in the construction activities, for the export of technical and engineering services, and cooperation in the electricity and energy industries, agriculture, extra-territorial cultivation, mine-sweeping, as well as the reconstruction of mosques and historical sites.

President Aliyev, for his part, praised Iran’s stances on the recent developments in the region, hailed the level of cooperation between the two nations, and said there exists a positive atmosphere for the expansion of relations in all fields, specifically the economic cooperation.

Enumerating the economic projects carried out jointly by the two countries, the Azeri leader welcomed the participation of Iranian companies in reconstruction of areas in the Karabakh region.

Aliyev also expressed satisfaction with Iran’s view on the six-party regional cooperation platform, saying the initiative would benefit peace and common interests in the region.

The meeting was also attended by Azerbaijan’s Foreign Minister and the Foreign Policy Advisor to the President of Azerbaijan.