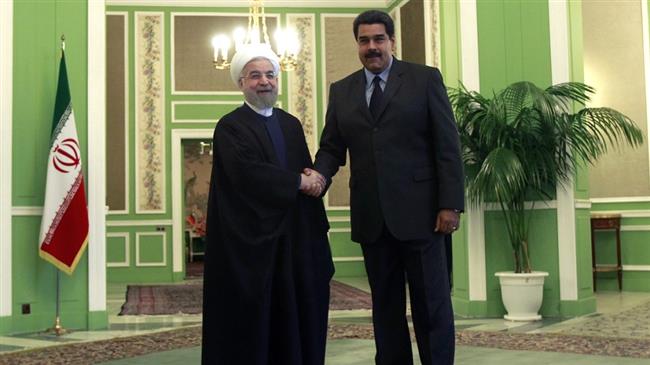 “Undoubtedly, cooperation among aligned countries in the OPEC, while neutralizing plans by certain powers against OPEC, can help stabilize an acceptable oil price in 2015,” Rouhani said on Saturday.

The Iranian president made the remarks in a meeting with Venezuelan President Nicolas Maduro in Tehran, where both officials underlined the necessity for the further enhancement of economic, political and cultural relations between Tehran and Caracas.

Rouhani said promotion of ties with the Latin American countries, including Venezuela, is among priorities of his administration.

He also called for the expansion of cooperation between Tehran and Venezuela at the international level, which he said would serve the interests of the Middle East and Latin America and can help restore security to the world.

“The two countries (Iran and Venezuela) are against terrorism and extremism in the world and are cooperating in the establishment of stability and security across the globe,” said Rouhani.

For his part, the Venezuelan president called on the oil exporting countries to help restore stability to oil prices.

After leaving Tehran, Maduro is expected to visit other member states of the Organization of the Petroleum Exporting Countries, including Saudi Arabia, to discuss oil price slump.

Oil prices have plunged about 50 percent since June last year over increased supplies by certain countries such as Saudi Arabia, the largest OPEC producer, and a lackluster global economic growth.

OPEC, which pumps out about 40 percent of the world’s oil, has so far refrained from cutting its production to balance the market due to opposition from Saudi Arabia.