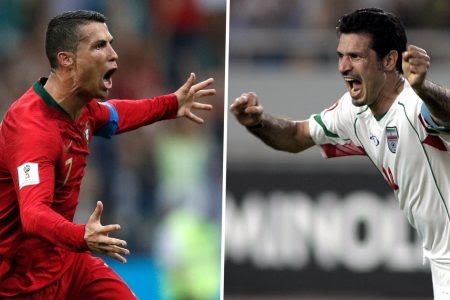 On Wednesday, Ronaldo scored two headed goals in a 2-1 home win against the Republic of Ireland, which saw him pass Daei’s record of 109 national goals, to become the record holder of men’s football top national scorers.

“Your humility and kindness make you an even greater champion, @cristiano log may your record last!” Daei said in a tweet, after Ronaldo broke his record.

“Another reason for me to appreciate this achievement as much as I do right now, is because Ali Daei has set the standards in such a high level, that at some point even I started thinking that I might never catch him. Congratulations to the ‘Shariar’ [King; as Daei is known among his fans in Iran] for holding the record for so long and thanks for always showing so much respect for me every time I scored and as I became closer and closer to his outstanding number,” he wrote in on Instagram.

Daei, now 52, played for the Iranian national team until 2006. A year after his retirement he was appointed to FIFA Football Committee, where he served for seven years. The former Iranian striker was inducted into the Asian Football Hall of Fame in 2014.