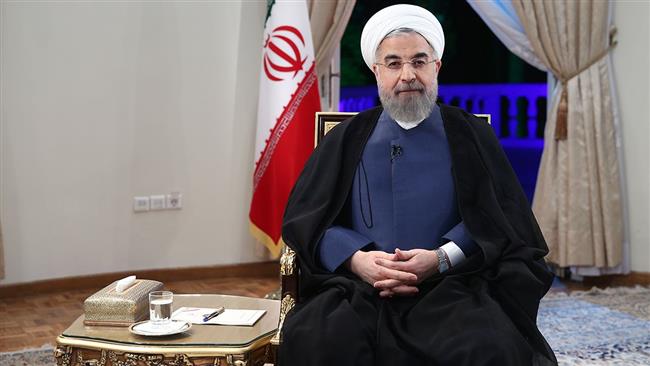 President Rouhani said that the end results of the negotiations were a win-win.

Speaking in a live televised show on Sunday, President Rouhani said he did not mean to exaggerate, but believed that what was achieved at the end of the negotiations between Iran and P5+1 was beyond what was initially expected.

A win for all & the matter of trust

President Rouhani said that the end results of the negotiations were a win-win. He said the opposite side had said it was pursuing an objective of preventing Iran from obtaining a nuclear weapon. Iran never intended to build atomic bombs, the president said; so, ‘if the other side in the negotiations thinks it has achieved that goal (of preventing an Iranian bomb), let this be a victory for it.’

The Islamic Republic, however, had three goals in the talks, all of which were achieved, President Rouhani said.

The Iranian president said the fact that an interim agreement between Iran and P5+1 was holding for nearly two years could be a sign that the comprehensive agreement reached between the two sides on July 14 could also be holding.

We cannot say we have 100% trust in the partners to the agreement, but we can devise a mechanism under which no side would face a loss if the other breached the agreement, the president said.

He said Iran has never sought weapons of mass destruction.

It did not opt for the manufacturing of such weapons even when it was locked in a war with Iraq back in the 1980s, the president said.

“Iranian people are noble; even when fighting, they fight nobly, they don’t seek weapons of mass destruction,” he said.

Nothing to worry about

Referring to certain concerns about inspections under the Joint Comprehensive Plan of Action, the president said there is no reason to worry at all as what Iran has agreed to under JCPOA is nothing extraordinary.

“No one in the world would trade its national security… [and] its secrets,” he said, reassuring that Iran’s military capabilities will by no means be depleted.

Responding to a question about the economic impacts of the anti-Iran sanctions that his administration sought to have removed as a result of the agreement, President Rouhani said his cabinet has been successful in containing or countering economic woes such as high inflation and stagflation.

“Sanctions cannot be successful, ever; but they can have impacts,” he said, adding that as a result of the success of the negotiations, the doors of international business opened to Iran.

No country can be found that is not happy about the conclusion of the agreement between Iran and P5+1, but a handful of warmongers and Zionists, President Rouhani said.

Answering another question about concerns that a potential increase in trade activity as a result of the removal of the sanctions against Iran would result in imports of foreign goods to the country, President Rouhani said such concerns are valid.

He said Iran would welcome foreign investment, but not increased imports. The Iranian president said he has directed his economic team on the matter.

Iran should work hard toward employment for the youth, the Iranian president said.

He said, by the end of his administration’s term in office, the inflation rate in the country will slip into single-digits territory.

Another question put to the president was about potential acts of mischief by the International Atomic Energy Agency (IAEA), the UN agency that has been tasked with carrying out the technical specifications of JCPOA. President Rouhani said the country should be very vigilant that such mischief does not occur, both in terms of security issues as well as technicalities.

The Iranian president also said that the impacts of the removal of sanctions under JCPOA will not be felt overnight.

He said the “sapling” that has been planted will take some time to bear fruits, emphasizing, however, that his administration will try to have such impacts come sooner.