By Seyedeh Maryam Hosseini Lahijani
May 7, 2019

IFP has taken a look at the front pages of Iranian newspapers on Tuesday and picked headlines from 12 of them. IFP has simply translated the headlines and does not vouch for their accuracy.

Almost all Iranian papers today reported the upcoming announcement of Iran’s reciprocal measure against the US’ withdrawal from the 2015 nuclear deal, which is expected on Wednesday.

Also a top story today was the ceasefire agreement between the Israeli regime and the resistance forces in Gaza, which ended two days of bloodshed in the besieged enclave.

Several papers also covered the remarks made by US National Security Advisor John Bolton about the deployment of the American warship USS Abraham Lincoln in the Persian Gulf in a “message to Iran”.

3- Pompeo: Iranian Officials Responsible for Any Attack on US Interests 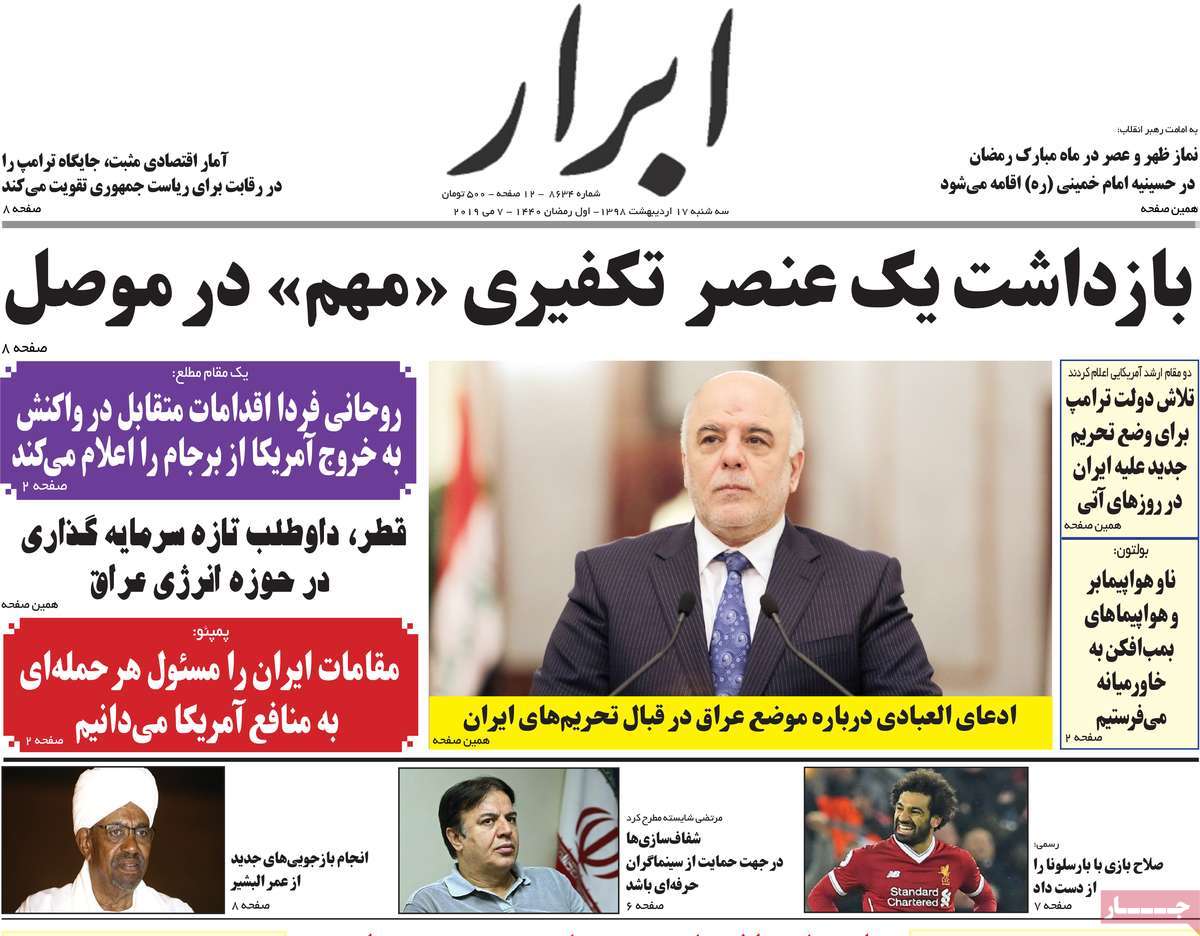 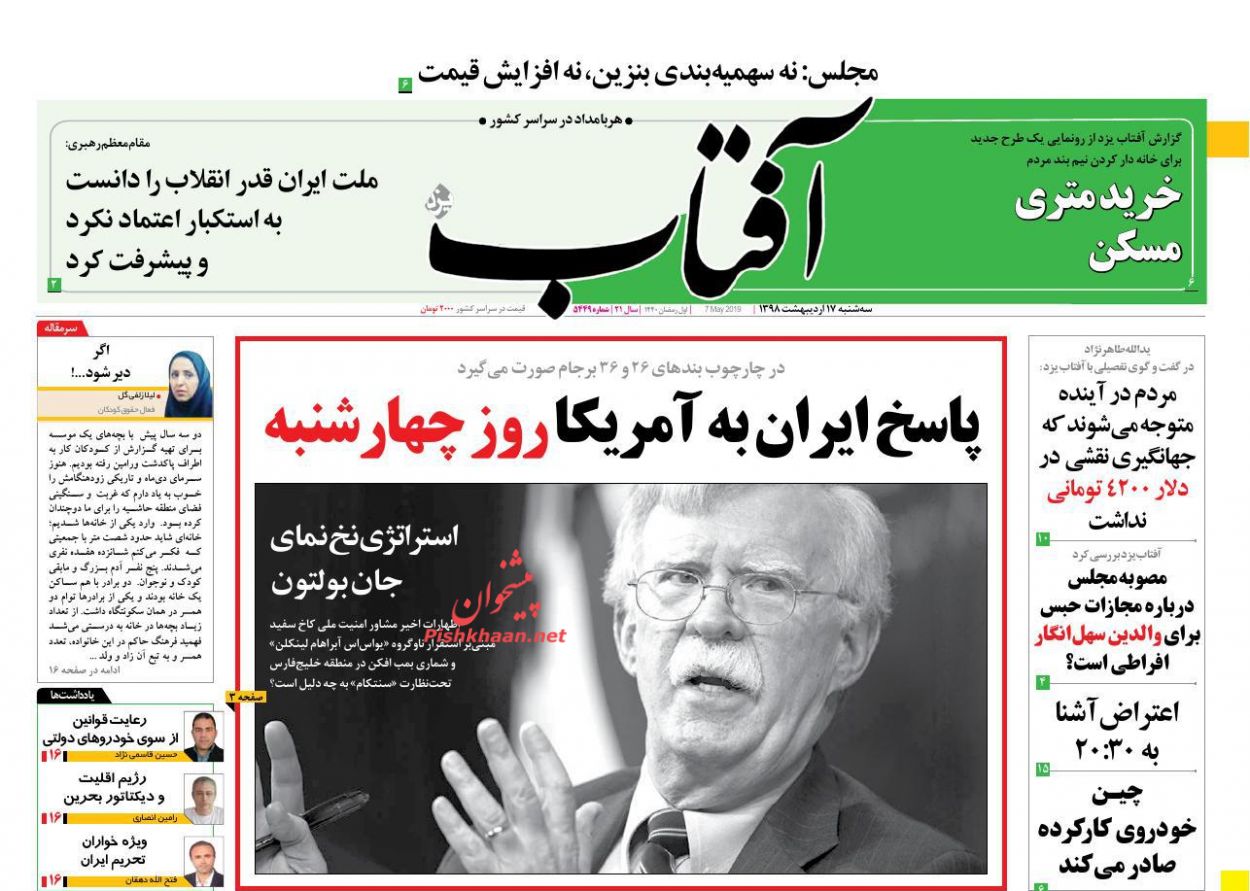 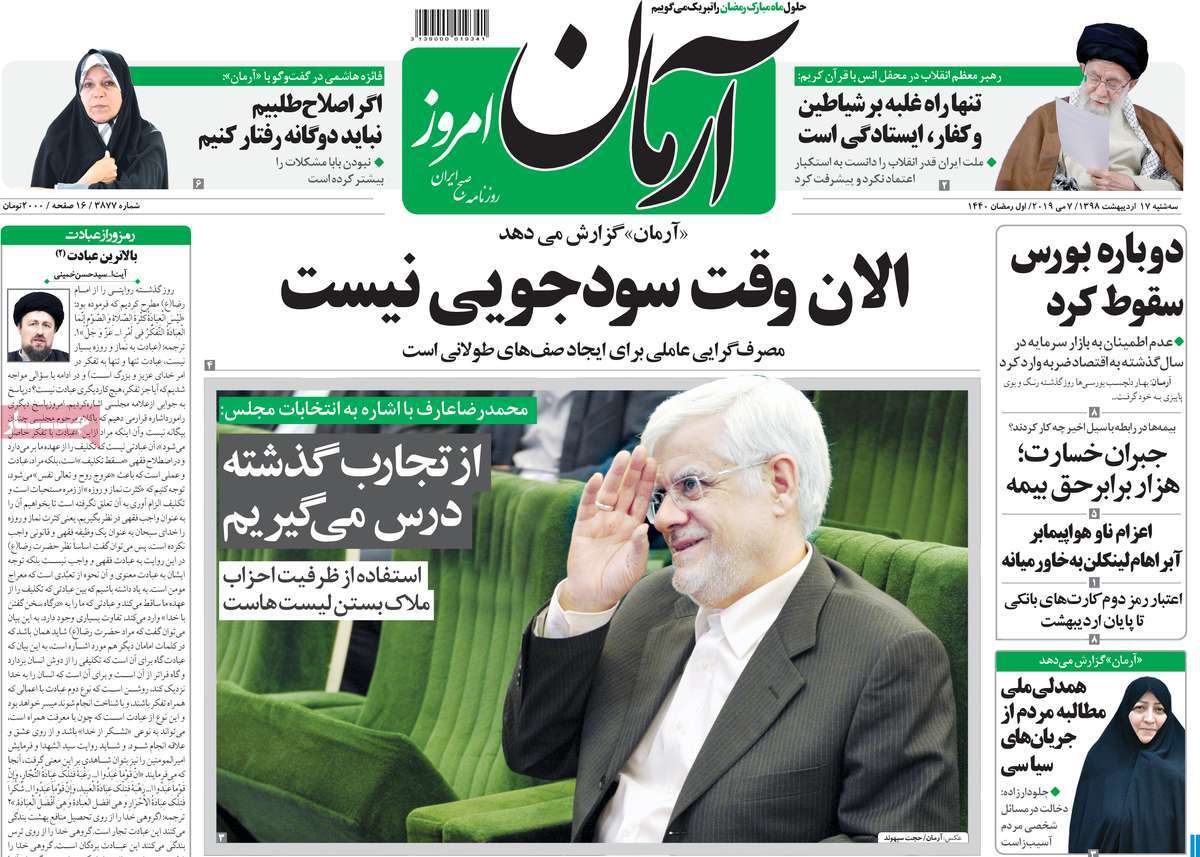 1- US May Impose New Sanctions against Iran’s Petchem Industry 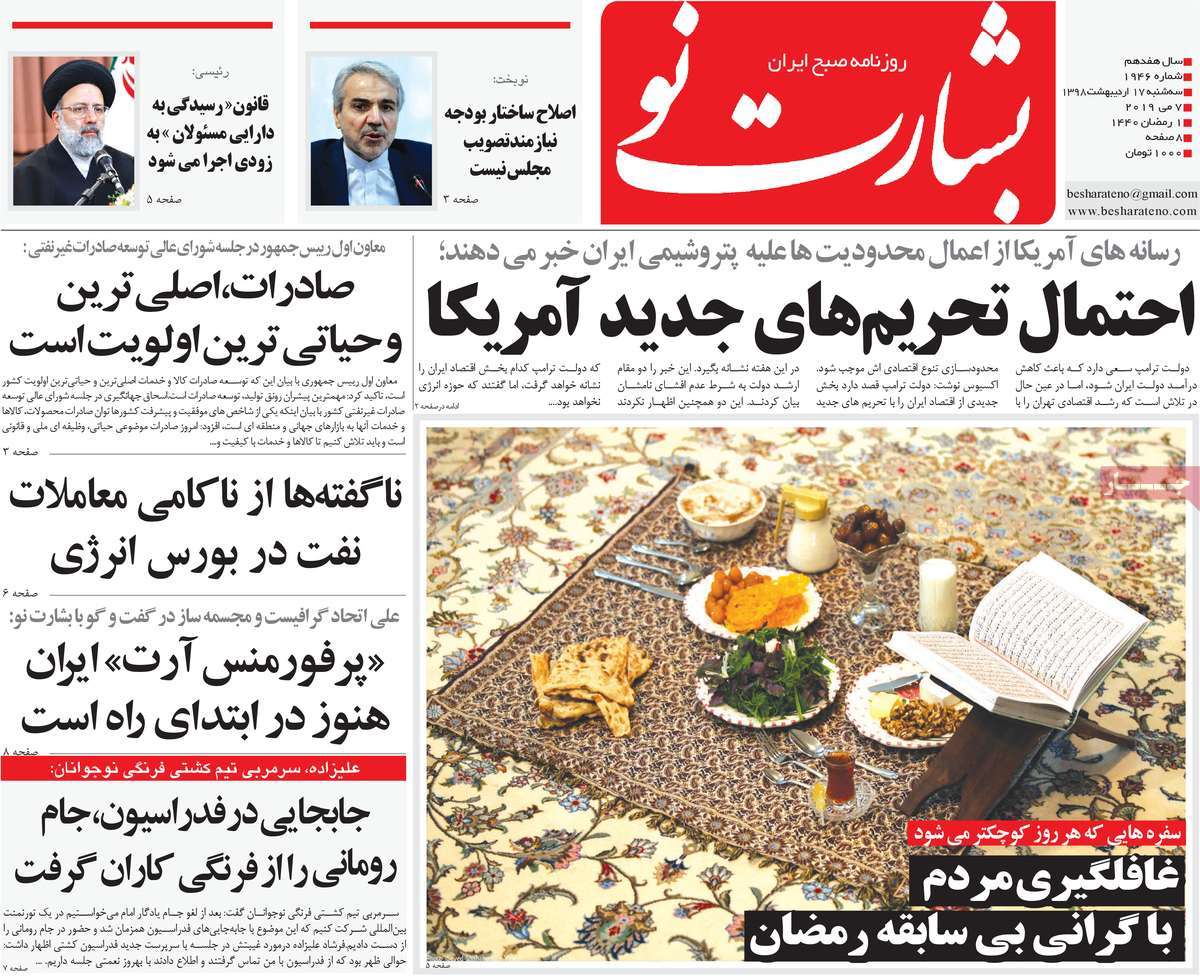 1- Return of US, China to Trade War

2- Iran to Reciprocate US Withdrawal from JCPOA on Wednesday

3- We Warn Tehran, but We Don’t Seek War: Bolton 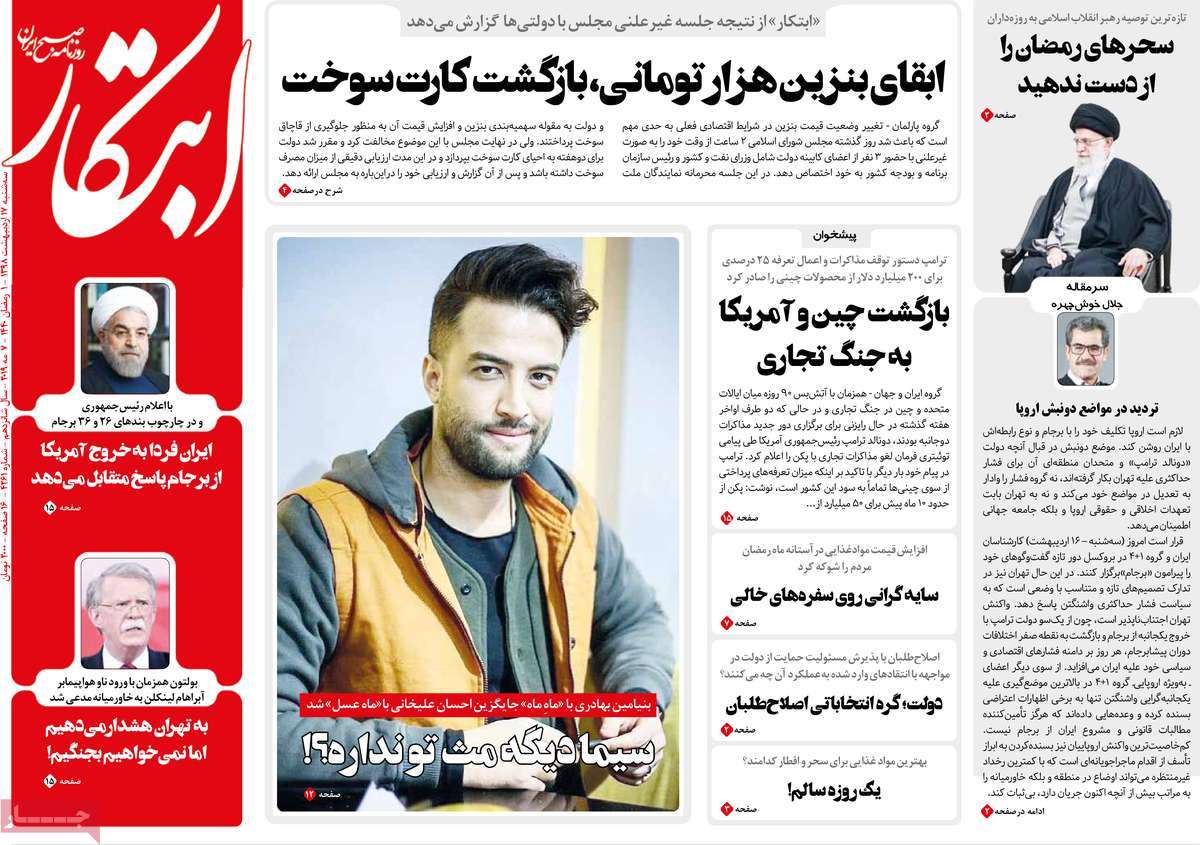 2- Iran’s First Reaction to US Withdrawal from JCPOA 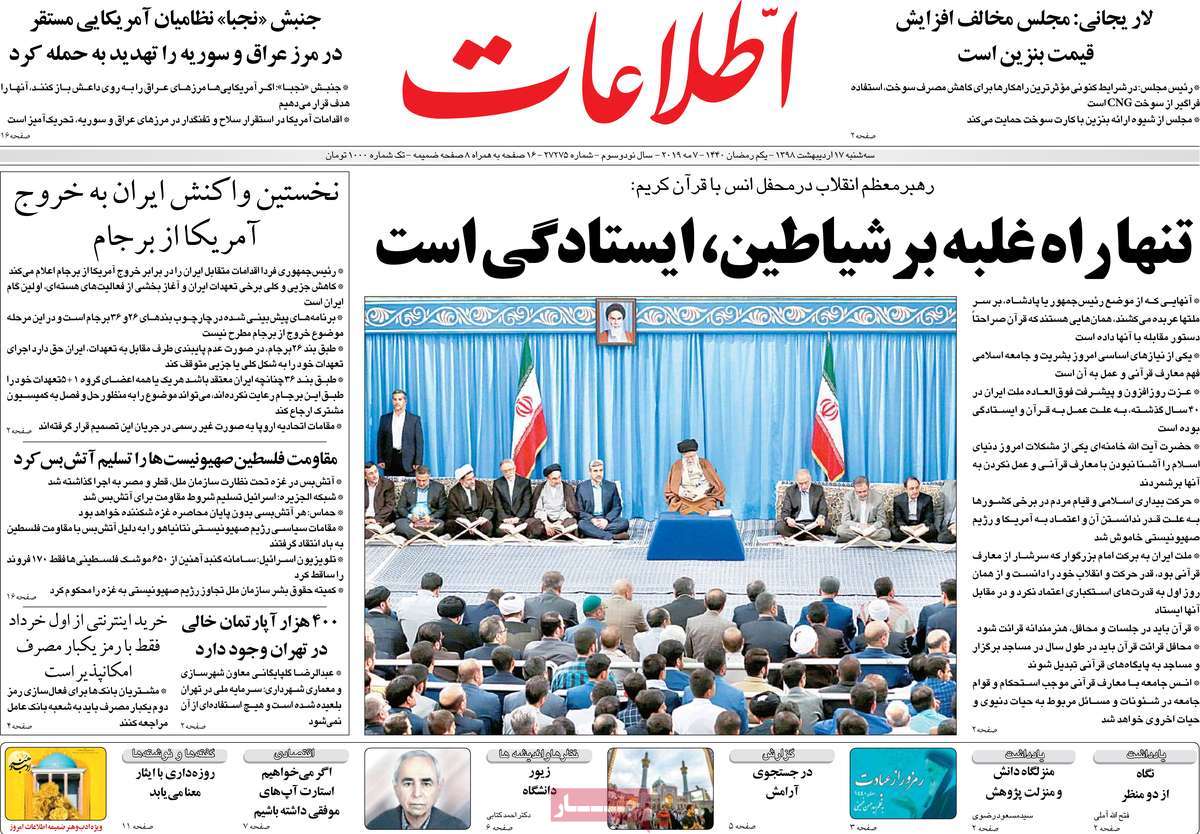 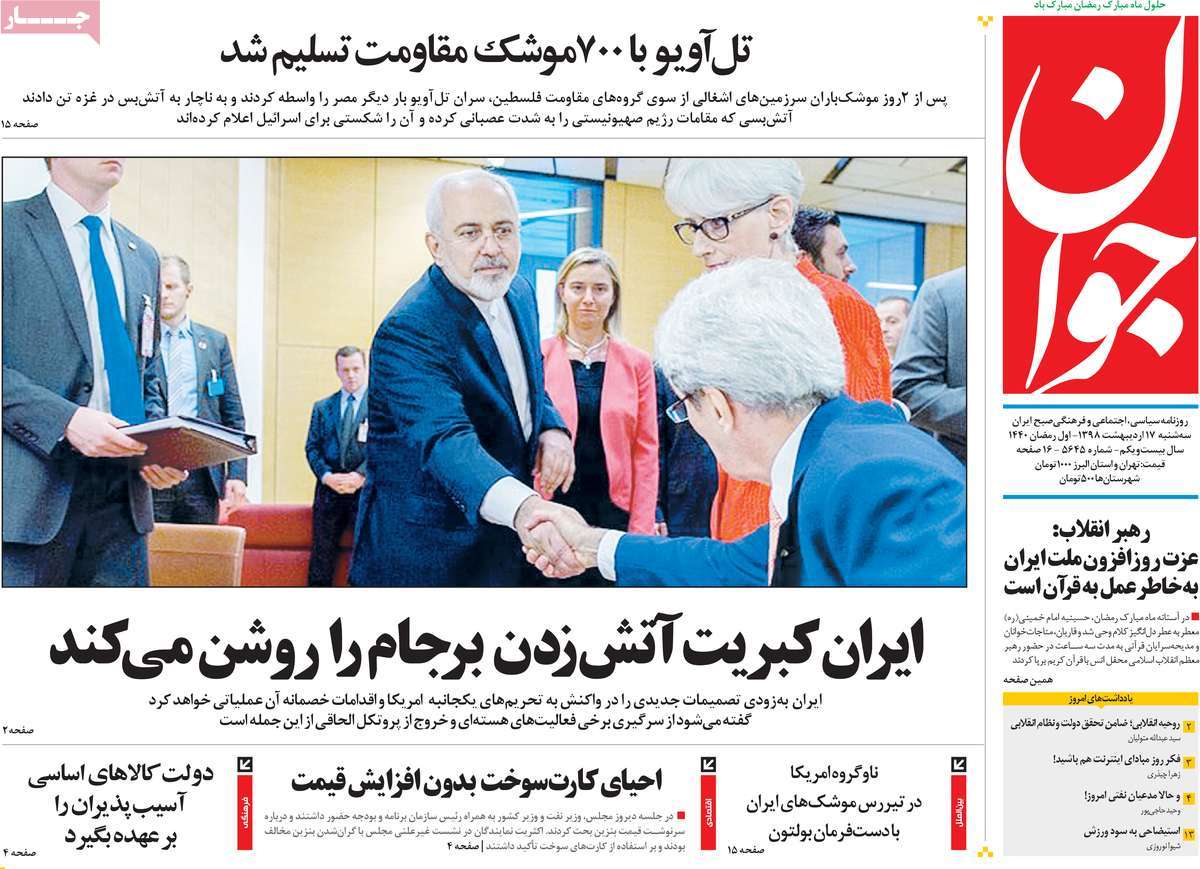 2- Iran to Respond to US Withdrawal from JCPOA Tomorrow

* Return of Calm to Gaza after Ceasefire 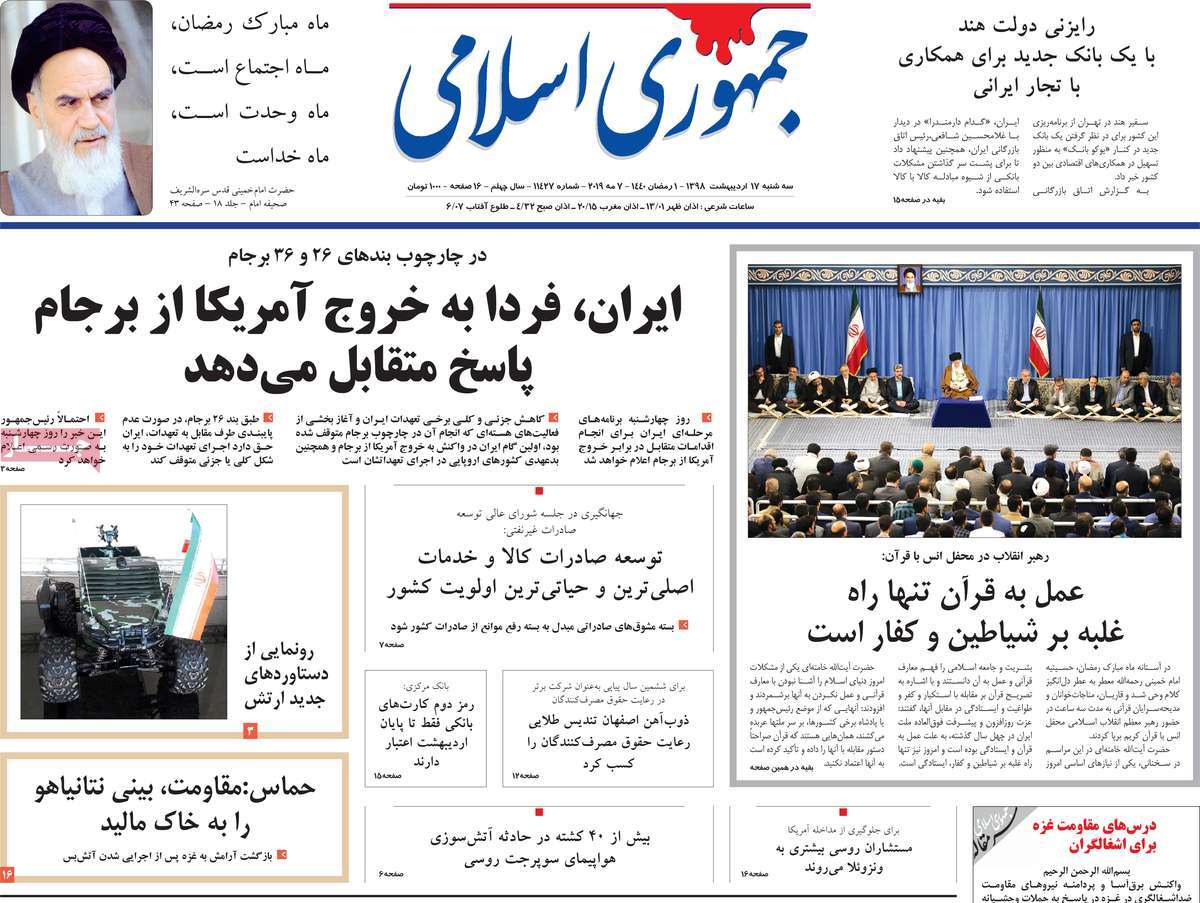 3- Netanyahu Accepts Ceasefire after Being Defeated by Resistance 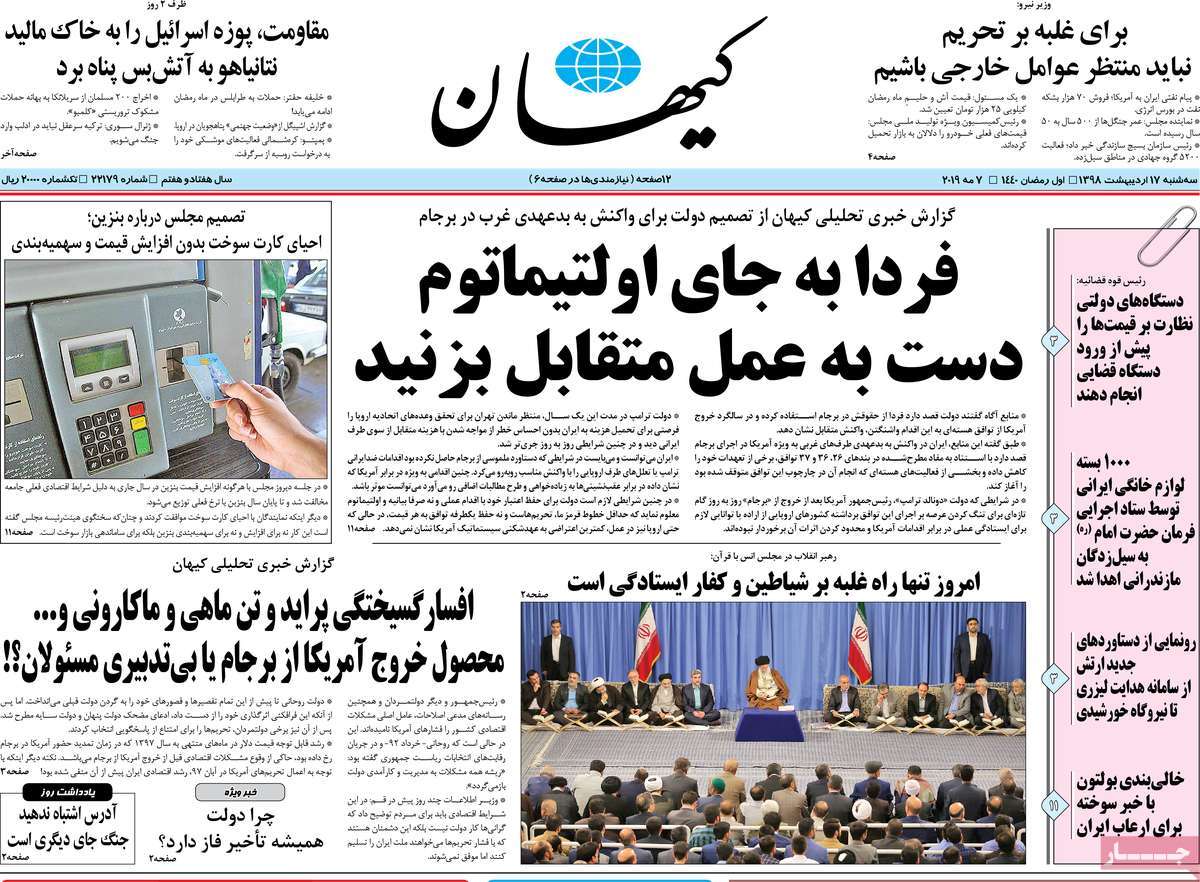 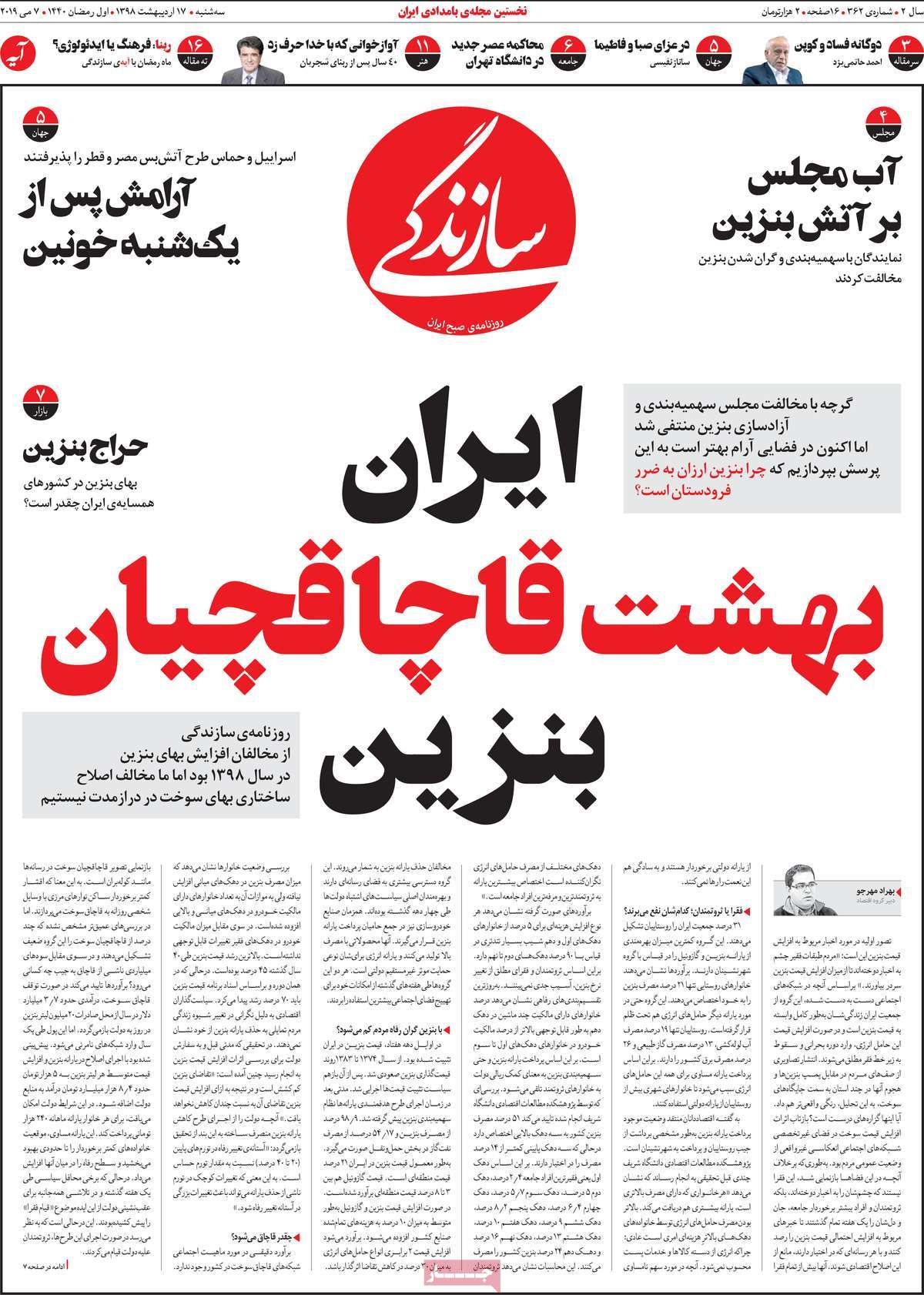 1- Countermeasure: Iran’s Reaction to US Withdrawal from JCPOA

2- US Sends Warship to Persian Gulf; Bolton: US Not Seeking War 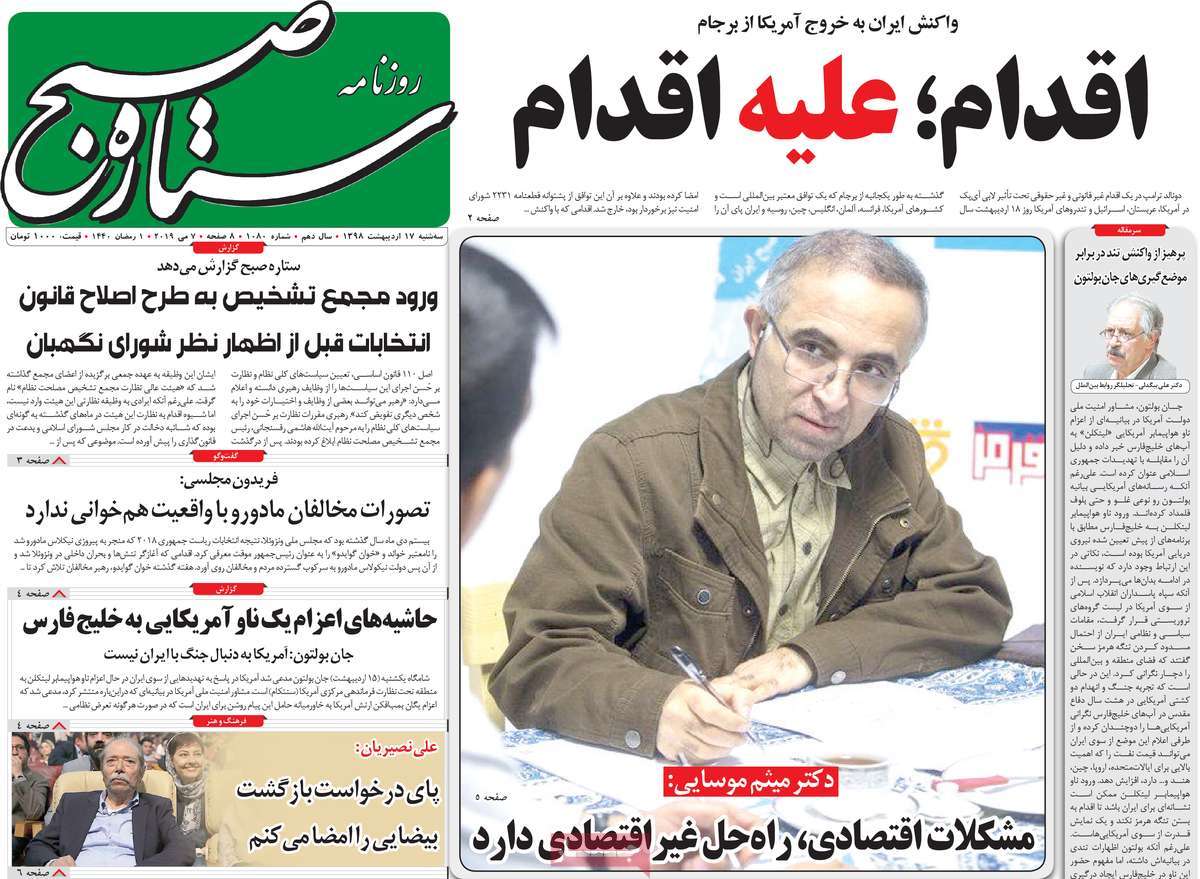 1- JCPOA Articles against Violator of JCPOA 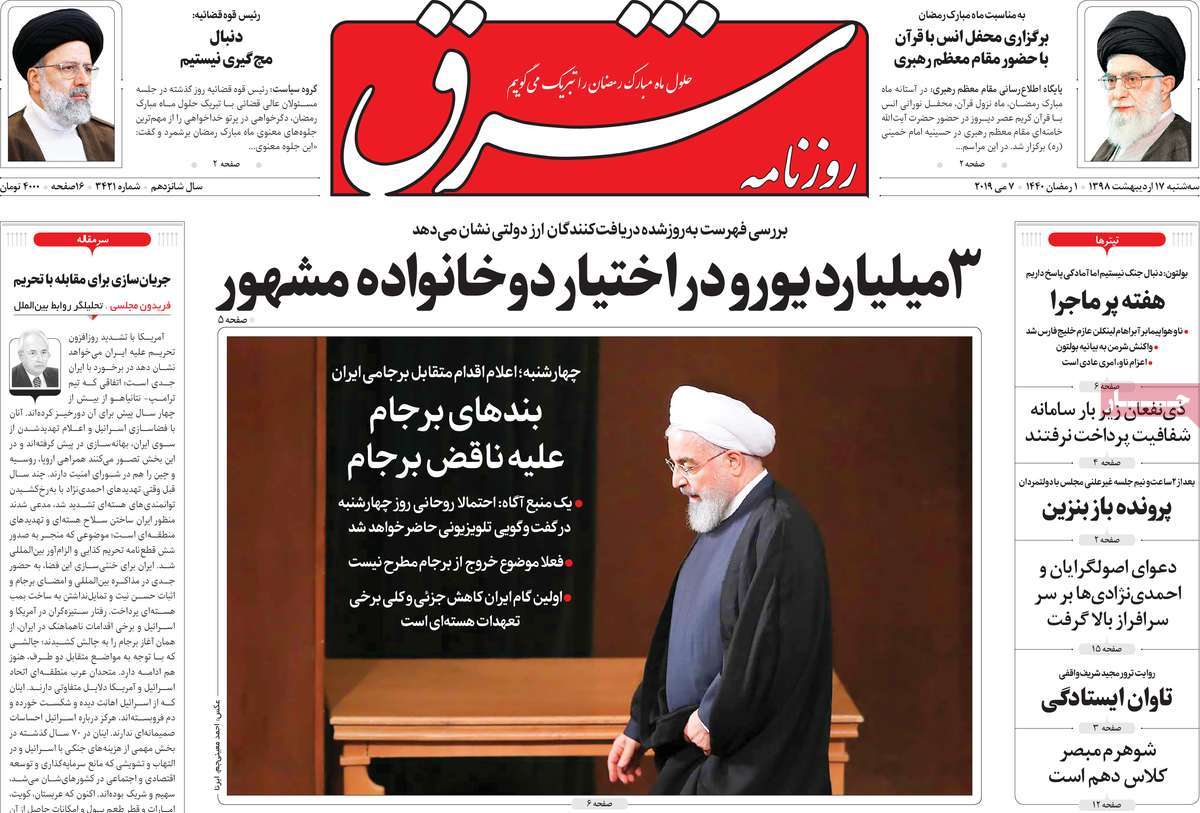