A look at Iranian newspaper front pages on March 3

A news conference of the Judiciary spokesman during which Mohseni Ejei touched on a number of issues including the cases involving Mehdi Hashemi and Babak Zanjani as well as tax evasion dominated the front pages of Iranian newspapers on Tuesday. Also on the covers of the dailies were the comments of Foreign Minister Zarif about the likely conclusion of a nuclear deal between Iran and P5+1 this week if “the West showed determination and agreed to lift all sanctions.”

Abrar: “If the US took military action, we would put our real might on display,” said the deputy chief of staff of the Iranian armed forces. 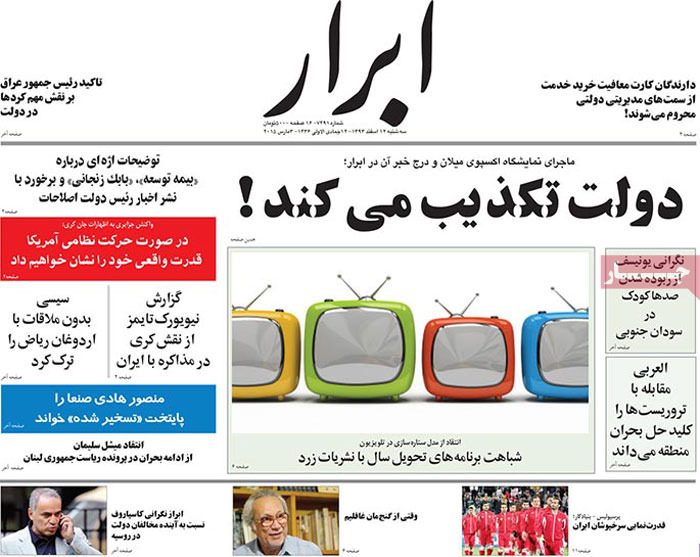 Afarinesh: “The Judiciary is ready to help the Executive branch turn up the heat on tax evaders,” announced the Judiciary spokesman. 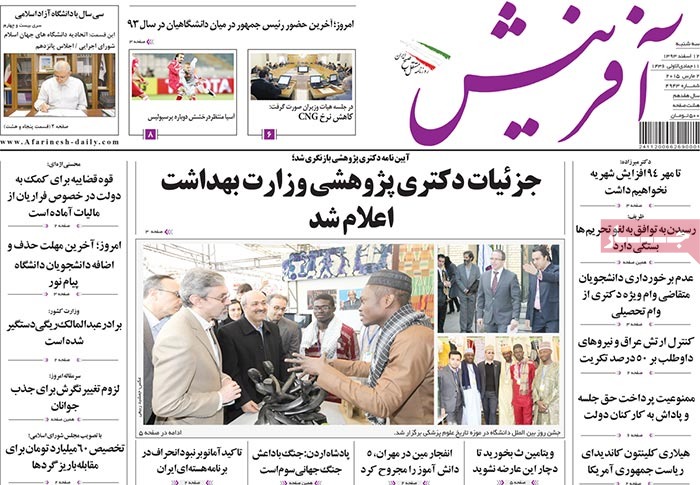 Afkar: Old cars are to blame for 60 percent of air pollution in the capital.

Afkar: The IAEA chief has admitted there has been no diversion in Iran’s nuclear program. 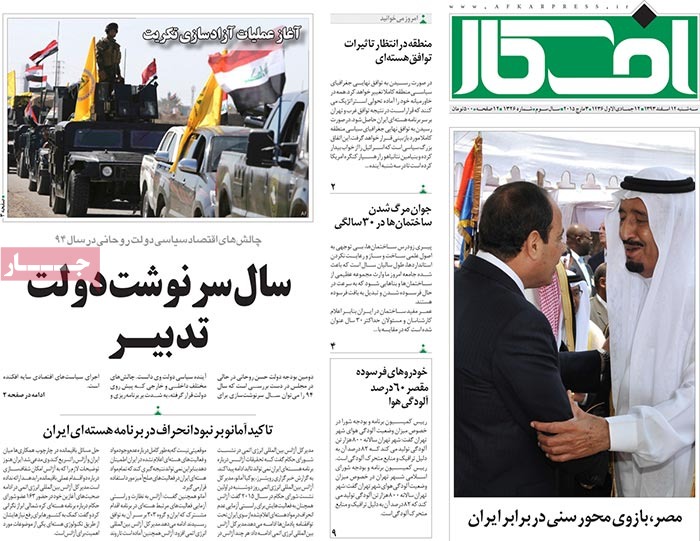 Aftab-e Yazd: Impeachment threats did not silence the minister.

Interior Minister Abdolreza Rahmani Fazli has once again said drug traffickers are willing to make their way into politics. 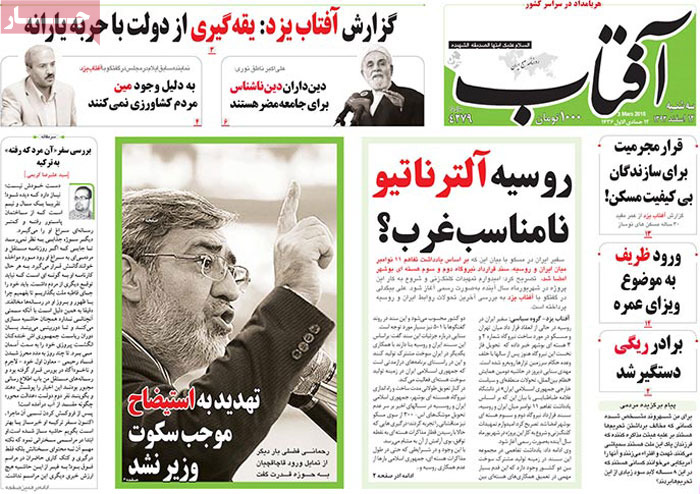 Foreign Minister Mohammad Javad Zarif said if the West showed political determination and agreed to terminate sanctions, a deal could be clinched over Iran’s nuclear case as early as this week.

Arman-e Emrooz: A verdict is expected in the case of Mehdi Hashemi by yearend

The announcement that the ruling in the case of Ayatollah Hashemi Rafsanjani’s son is less than three weeks away was made by the Judiciary spokesman in a press conference. 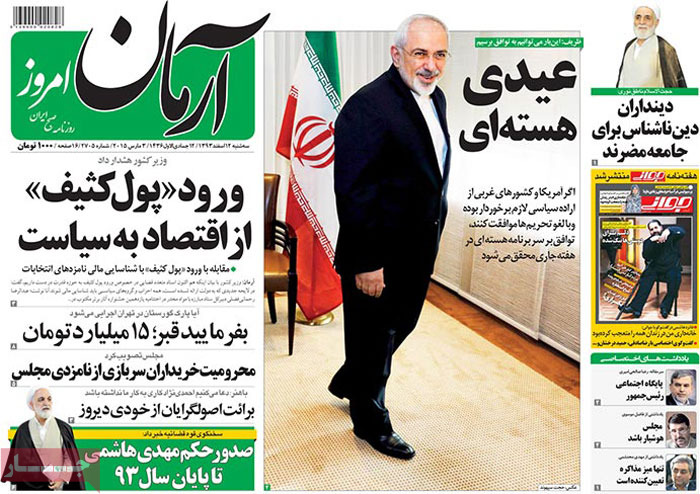 Asrar: “The faithful who lack insight into the faith harm the interests of society,” said Ali Akbar Nategh Nouri, a member of the Expediency Council. 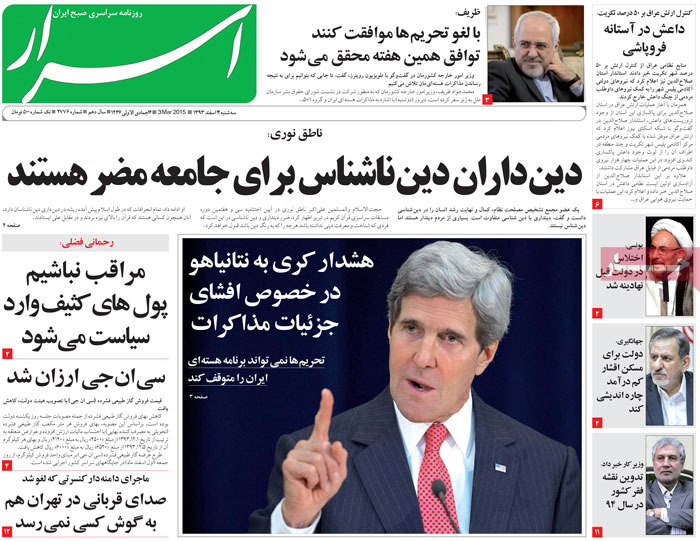 Ebtekar: The Iraqi army has retaken some 50 percent of Tikrit from terrorists. 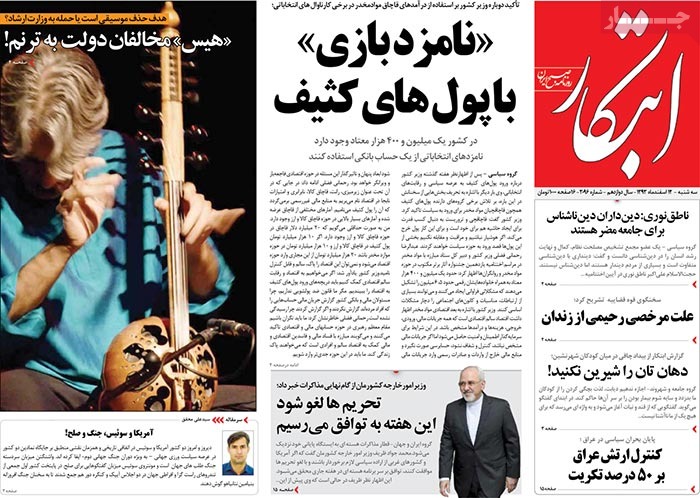 Emtiaz: Fajr Clothing and Fashion Festival has opened in Tehran. 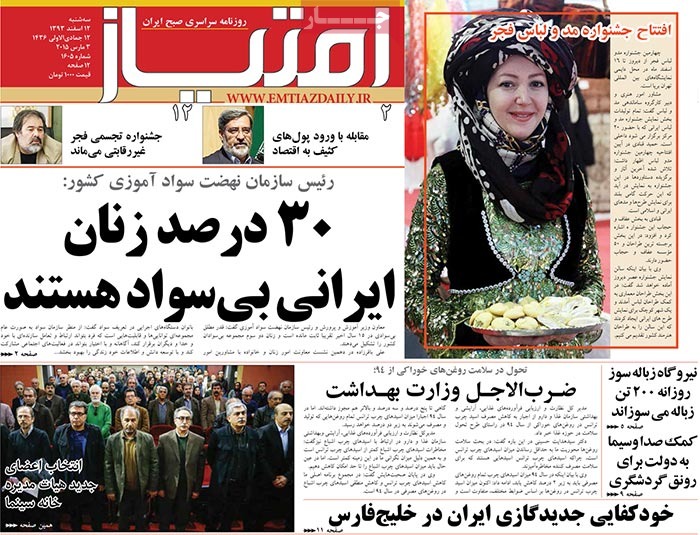 Etemad: Five nomadic kids were wounded when a landmine went off in Ilam Province. Ettela’at: Scores of people have staged an anti-Zionist rally in Washington.

The rally was timed to coincide with a visit by the Israeli prime minister to the US.

Ettela’at: Residents of Tehran produce some 12,000 tons of garbage daily.

Ettela’at: A ceremony has been held to celebrate the 80th anniversary of University of Tehran. 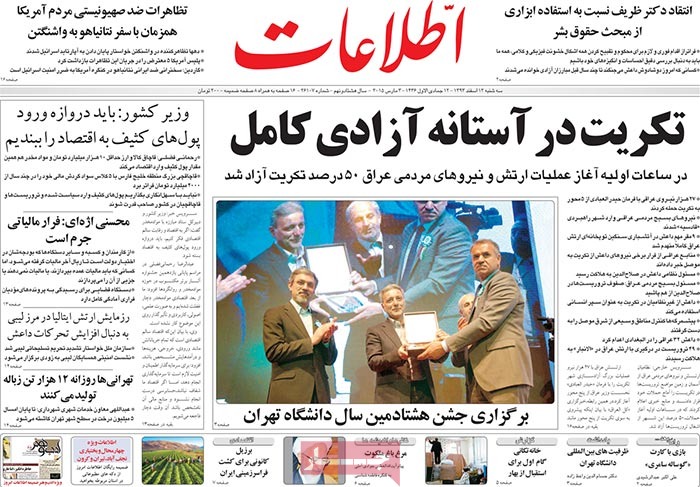 Farhikhtegan: A ceremony has been held to mark the 77th anniversary of the National Library of Iran. 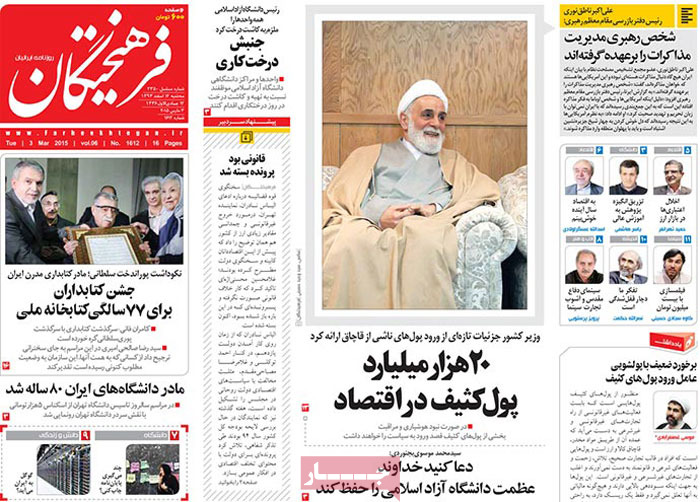 Jomhouri Islami: The remains of 58 martyrs of the Sacred Defense have arrived back home through Shalamcheh Border Crossing. 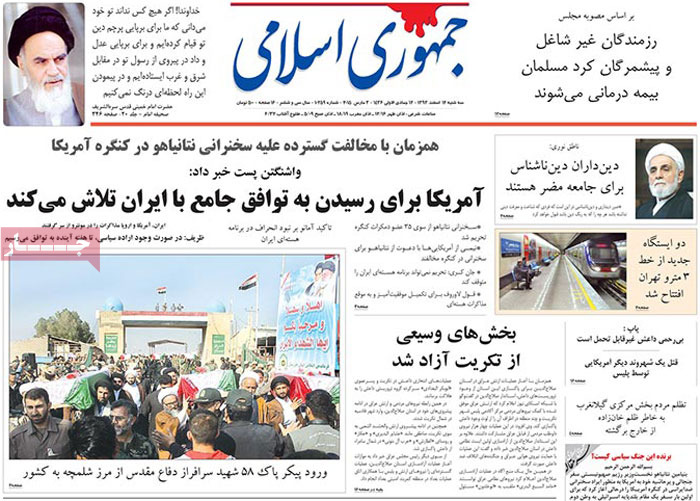 Kaenat: Iranian carmakers draw up a seven-year quality strategy to become competitive on the world stage. 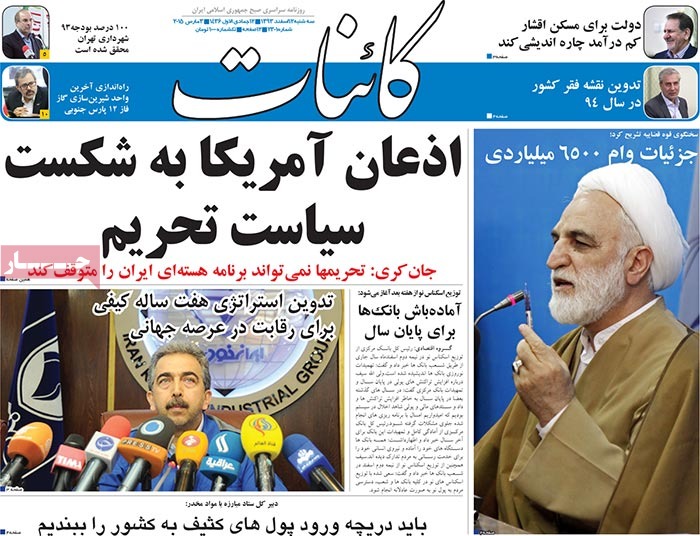 Kayhan: Netanyahu’s mission: Support for the Geneva deal under the guise of opposition!

Kayhan: Two new subway stations have opened in the capital.

Kayhan: What does it mean to run 27 universities through acting presidents? 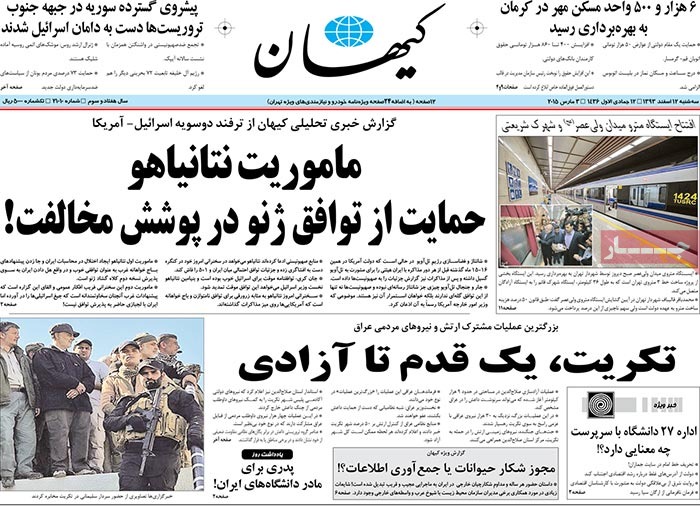 Khorasan: The price of CNG has decreased. 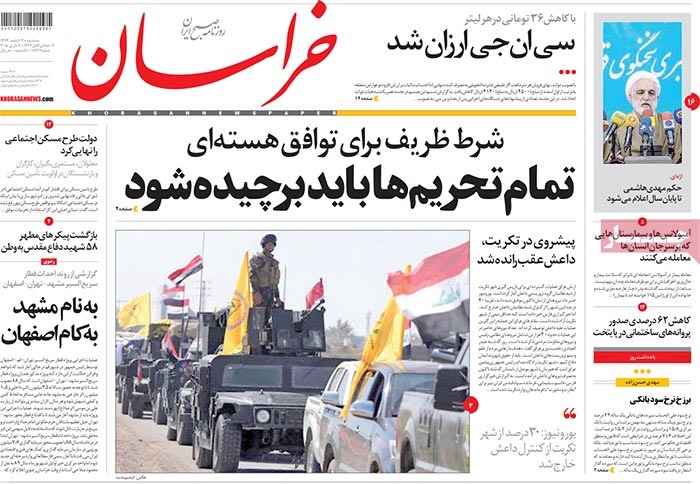 Mardomsalari: There are confirmed reports that a brother of executed terrorist Abdolmalek Rigi has been arrested. 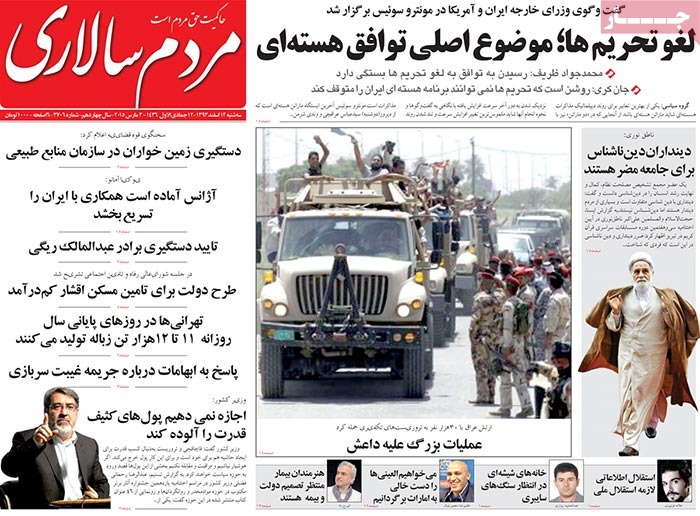 Resalat: “Why is that anti-Semitism constitutes a crime but Islamophobia is freedom of speech?”

The Iranian Foreign Minister Mohammad Javad Zarif posed the question during his speech at the UN Human Rights Council. 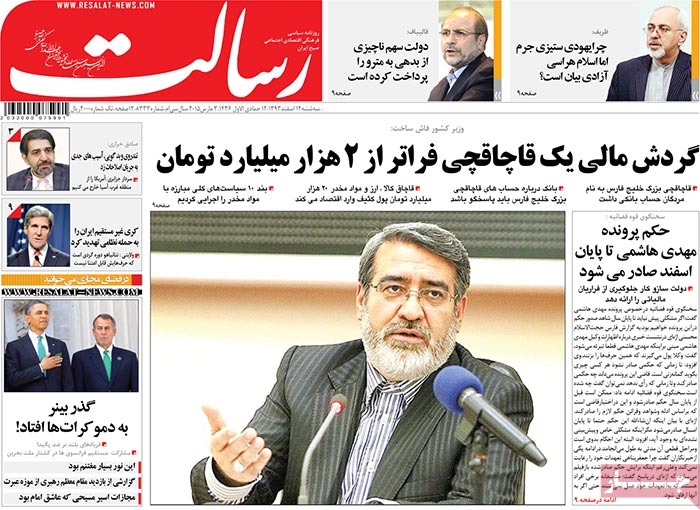 Sayeh: Some 95 percent of the country’s wildlife has vanished in half a century. 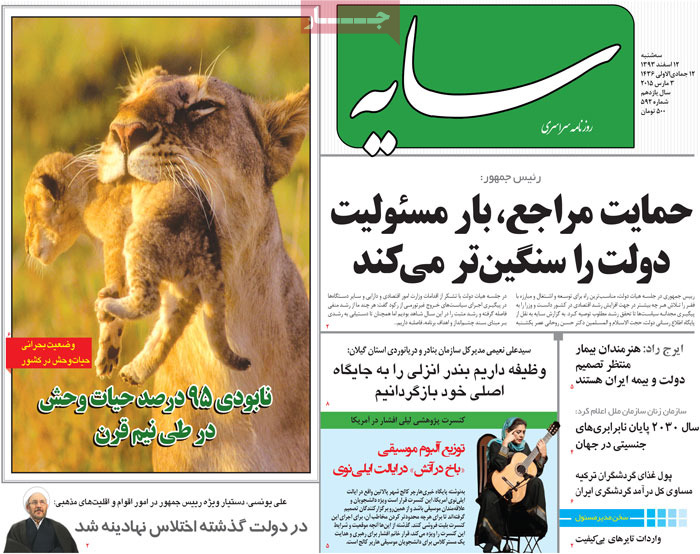 Tejarat: Twelve new subway stations will be inaugurated in the capital next year. 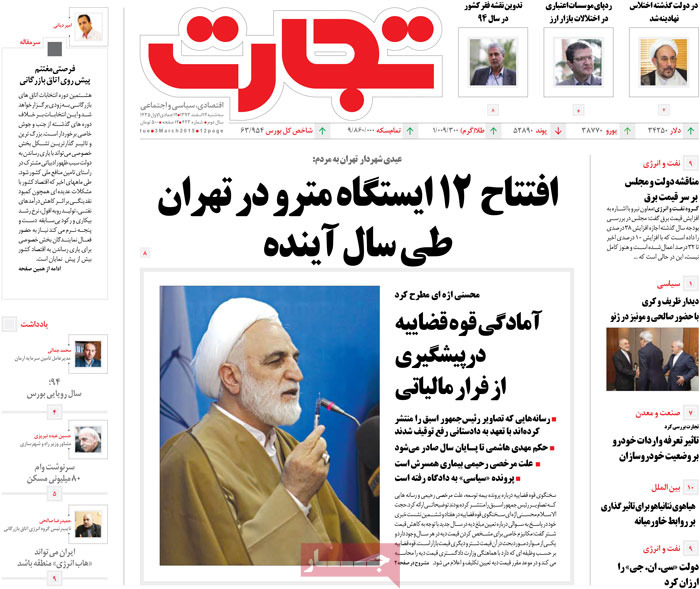