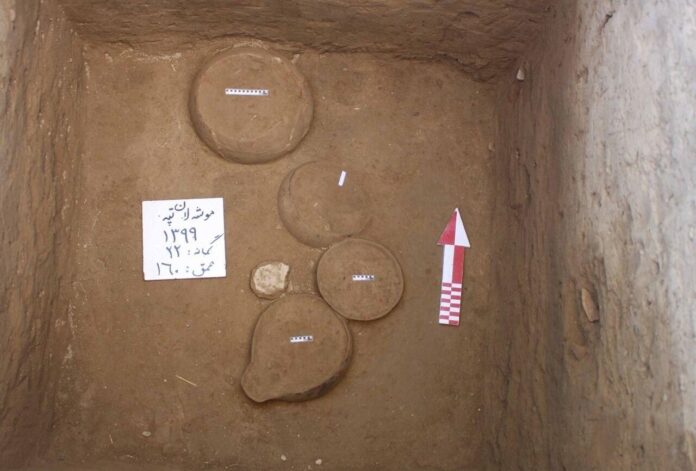 Supervisor of a team of archaeologists said the six earthenware dishes have been found without any damages after excavation at ‘Moshelan’ archaeological site near Savojbolagh in Iran’s northern province of Alborz.

Apart from the earthenware dishes, which had been buried in the fifth millennium BCE probably as part of a burial ceremony, ancient layers of soil, earthen objects and bones have been also discovered in the site, Siavash Saraqi added.

The new findings include footed dishes, clay vats, and dishes with red gutter-shaped spouts decorated with geometric patterns and drawings of animals, such as goats, dating back to the Cheshmeh-Ali era, he noted.

The Moshelan Hill, also known as Ismail Abad, is a major archeological site located in Savojbolagh in Iran’s central plateau that dates back to the fifth millennium BCE, he added, saying the area was excavated for the first time in 1957-1958, and once again later in 1977 by Masoumeh Navaei.

Considering the expansion of rural areas in the region, the historic hill has been poorly protected, he added, saying the Research Institute of Cultural Heritage and Tourism has authorized a delegation to begin feasibility studies to determine boundaries for the Moshelan Hill archeological site.

The studies show that the historic area is much larger than what has been reported earlier, Saraqi said, noting that much of the site in the western wing has been sadly bulldozed and turned into gardens and private villas.

Human civilization in Iran dates back to the Lower Paleolithic era, over 800,000 years ago, which is proven by archaeological finds made in the Kashafrud Basin.

Some of those evidences can be found at the Zagros Paleolithic Museum in Kermanshah in western Iran.