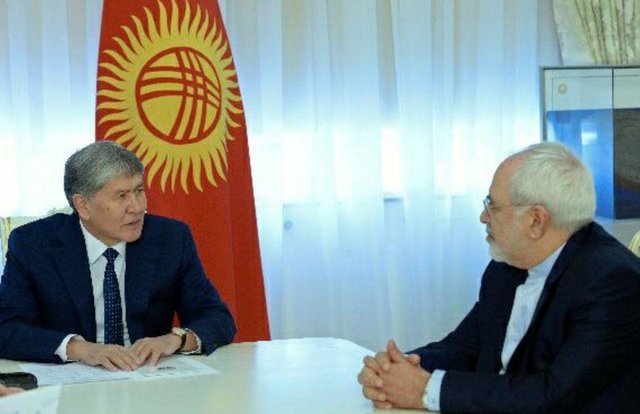 Iran’s foreign minister and Kyrgyzstan’s president explored the avenues for promoting bilateral relations in a meeting held in the Kyrgyz capital of Bishkek on Wednesday.

According to the Iranian Foreign Ministry’s official website, Foreign Minister Mohammad Javad Zarif and Kyrgyz President Almazbek Atambayev have conferred on Tehran-Bishkek bilateral ties and other issues of mutual interest during the meeting held on Wednesday.
The Iranian top diplomat is in Bishkek on the third and final leg of a regional tour of Central Asia and the Caucasus, which earlier took him to Turkmenistan and Georgia. 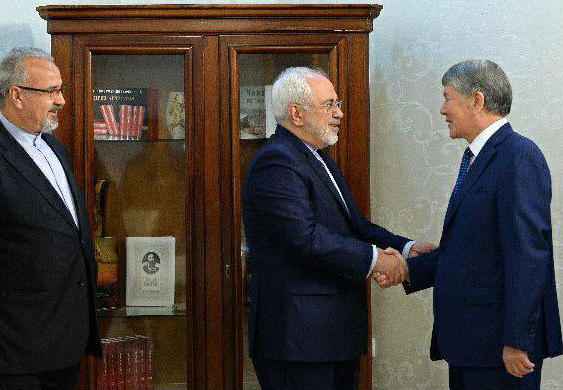 Earlier today, Zarif took part in a conference in Bishkek on Iran-Kyrgyzstan economic cooperation, and stressed that the Islamic Republic sees no limit to the reinforcement of its ties with Kyrgyzstan, and is prepared to promote mutual cooperation in all fields.
“Cooperation between Iran and Kyrgyzstan is possible in various fields such as technology and advanced sciences, energy, construction, agriculture, animal husbandry, industry, mining, and other fields,” he noted.
Heading a high-ranking business delegation, the Iranian foreign minister arrived in the Kyrgyz capital on Tuesday evening, and will later meet Kyrgyz prime minister, hold a press conference and join his counterpart in an official banquet.