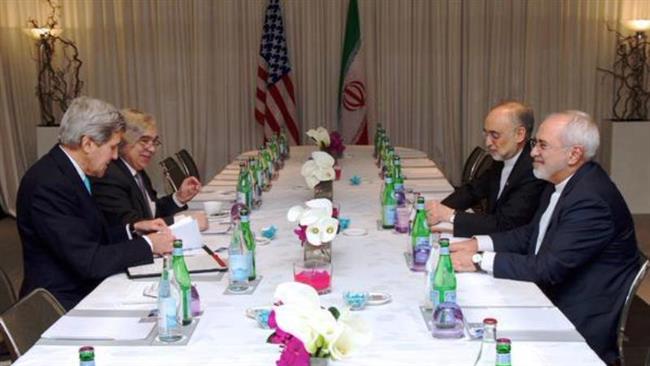 Zarif and Kerry have ended a first round of talks to resolve the remaining issues on Tehran’s nuclear program as a deadline for reaching an inclusive agreement draws closer.

The negotiations which began late Sunday in the Swiss city of Geneva ended after 2.5 hours with the two sides agreeing on resuming negotiations on Monday.

A source in the Iranian negotiating team said that the agenda for Monday is yet to be determined.

The meeting between the two top diplomats was delayed for several hours due to Kerry’s late arrival from London.

Ali Akbar Salehi, the director of the Atomic Energy Organization of Iran (AEOI) and US Energy Secretary Ernest Moniz also attended the talks. The high-ranking officials have already held two rounds of negotiations to discuss the technical aspects of Iran’s nuclear program.

Iranian and US delegates, who attended a simultaneous meeting with negotiators from Russia, China, Germany, France and the UK, later joined talks between Zarif and Kerry.

Deputy Foreign Minister Abbas Araghchi, the head of the Iranian delegation, said after the meeting with P5+1 in the EU mission building in Geneva that it is soon to claim any progress has been made.

The talks are expected to continue on Monday at an expert level with discussions on the technical issues.

The ongoing talks in Geneva, which kicked off on Friday, are among the last attempts by the involved parties to narrow gaps on the remaining issues as a deadline for reaching a comprehensive deal on July 1 draws closer.