Yemenis in Iran protest Saudi aggression against their homeland 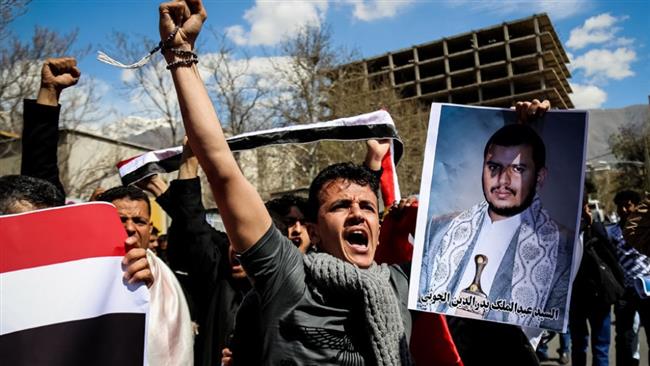 The protesters gathered outside the Saudi embassy in Tehran, chanting slogans against Saudi Arabia, the US and Israel.

Yemeni nationals living in the Iranian capital, Tehran, have held a protest rally to condemn the ongoing Saudi-led military aggression against their country.

The protesters gathered outside Riyadh’s embassy in Tehran on Wednesday, chanting slogans against Saudi Arabia, the US and Israel to voice their anger at the bloody aerial assault against their homeland.

The demonstrators carried pictures of Abdul-Malik al-Houthi, the leader of Yemen’s Ansarullah movement to express their full support for the revolutionaries in their country.

Among the participants were the Yemenis who had been injured in terrorist attacks prior to the Saudi-led war in the Yemeni capital, Sana’a, and later flown to Iran on March 23 for treatment.

Similar anti-Saudi rallies have been also held in several countries over the past days to censure the Saudi attacks.

Meanwhile, large numbers of Yemeni people also took to the streets in the capital, Sana’a, on Wednesday to condemn the Saudi aggression and demand an end to it.