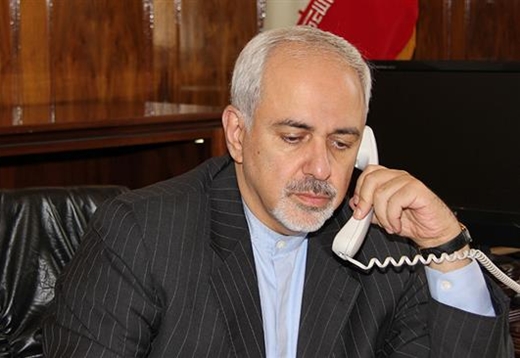 The solution to Yemen crisis is solely political and through forming an inclusive government with the aid of all political forces, said Zarif.

Iran’s Foreign Minister Mohammad Javad Zarif has called on the United Nations to do something to stop the Saudi aggression against Yemen.

In a phone conversation with UN Secretary General Ban Ki-moon, Zarif said the crimes committed against the Yemeni people are in clear violation of international law.

The Iranian foreign minister stressed that such crimes have led to the rise of extremist and terrorist groups in Yemen, further deteriorating the humanitarian catastrophe there.

Zarif said Tehran supports efforts by the new UN envoy to Yemen to stop the Saudi aggression and resume dialog among Yemeni parties.

“The solution to the crisis in Yemen is solely political and through forming an inclusive government with the aid of all political forces and without the interference of certain foreign countries,” he said.

“The crisis does not have a military solution and militarizing the crisis is in favor of no side” of the conflict, the top Iranian diplomat added.

For his part, the UN chief hailed Tehran’s efforts to send humanitarian aid to the people of Yemen. He also stressed that the crisis in Yemen can only be solved through political means.

Saudi Arabia started its military aggression against Yemen on March 26 – without a UN mandate – in a bid to undermine the Houthi Ansarullah movement, which currently controls Sana’a and other major provinces, and to restore power to Yemen’s fugitive former President Abd Rabbuh Mansour Hadi, who is a staunch ally of Riyadh.

According to the latest UN figures, the Saudi military campaign has so far claimed the lives of over 1,400 people and injured close to 6,000 people, roughly half of whom have been civilians.