The wrinkled Mona Lisa on display in a Tehran gallery 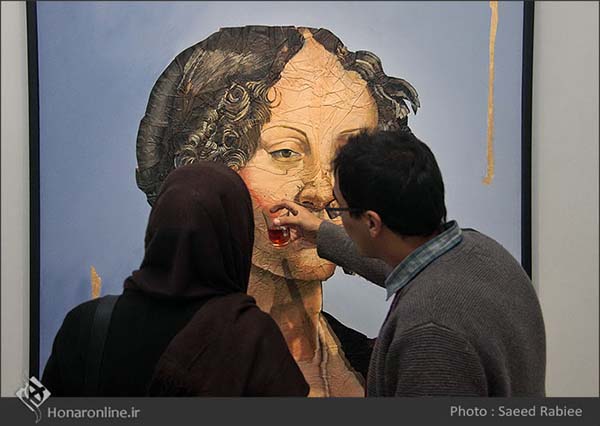 Wrinkles are not a reflection of death, annihilation; rather they are a sure sign of life. They represent aging which is still beautiful.

On December 28, honaronline.ir filed a report on an exhibition featuring wrinkled portraits by Mohammad Hamzeh. What follows is a partial translation of the report which was accompanied by a photo gallery:

Portraits of figures dating back to the Renaissance have become the theme of a painting exhibition by Iranian artist Mohammad Hamzeh, who has taken a look at the magnificence of that era through an esthetic prism. He has tried to depict the past glory by means of creases that the passage of time has imposed on his subjects. The portraits have developed wrinkles and aged, but their nobility has remained intact.

As for what distinguishes his fourth collection of wrinkled works from previous ones, Hamzeh said, “My fourth collection is not intended to create deformity. Such subtle wrinkles and tiny cracks have opened up slowly. In fact, that’s the way through which I look at the world. I don’t seek to create deformity, that’s why I have tried to make my new wrinkled works seem more real.”

Instead of causing damage to the portraits, wrinkles help the artist inject fresh blood into the paintings and make them stage a strong comeback from the past.

Describing the wrinkles as a symbol representing the passage of time, he said, “Wrinkles don’t merely appear on faces, even historical monuments get them too. Facial wrinkles might age people but they fail to totally ruin their beauty. They have no impact on their nature and even help people look more mature. As a matter of fact, wrinkles are not a reflection of death, or annihilation; rather they are a sure sign of life. They represent aging which is still beautiful.”

In an introductory booklet of the exhibition, Omid Rouhani, an art critic and actor said, “These portraits depict centuries-old aristocrats and the elite of the Renaissance who are still bathed in glow of pride. They have been detached from their world to appear on a background which is devoid of time and space to let their beauty and glory shine and reflect the height of their individuality, elegance and grandeur. […] By marring their apparent beauty, the artist has sought to explore new esthetics.”

Mohammad Hamzeh is 51 years old. The exclusive exhibition which displays his wrinkled portraits painted through the acrylic technique is his 12th. Earlier, Tehran Museum of Contemporary Art and art galleries in New York and Germany displayed his works along with those of other artists.