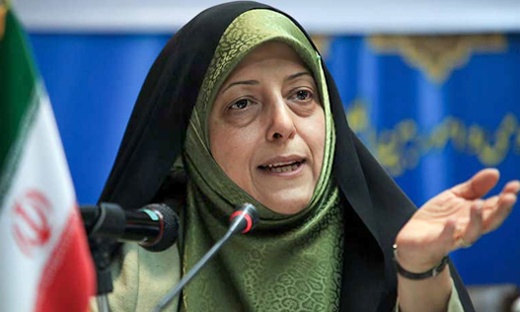 Iran’s environment chief Masoumeh Ebtekar has said that the polluting industries will be shown no leniency.

The Islamic Republic News Agency (IRNA) on January 18 quoted Ebtekar as saying in a conference to mark the Clean Air Day that the IEPO will run checks on the industrial discharges and that the polluting industries will be given warnings if they fail to remove their shortcomings. The following is a partial translation of the report:

Ebtekar said dust particles are a major contributor to air pollution, adding the government has taken effective measures to eliminate these particles and the Supreme Environment Protection Council is to pursue the question of dusts which drift in from the country’s western neighbors.

She went on to say that government has taken serious measures to tackle air pollution in big cities, adding that elimination of air pollution needs long-term planning as well as coordination among related organizations.

She also pointed to the omission of gasoline produced at petrochemical refineries in cooperation with the Oil Ministry as another step to cut pollution, saying that the IEPO is seeking to improve fuel quality.

The environment chief then highlighted her organization’s efforts to supervise the performance of carmakers in meeting the standards, take old cars off the streets, and expand public transportation as some of the government’s measures to combat air pollution.