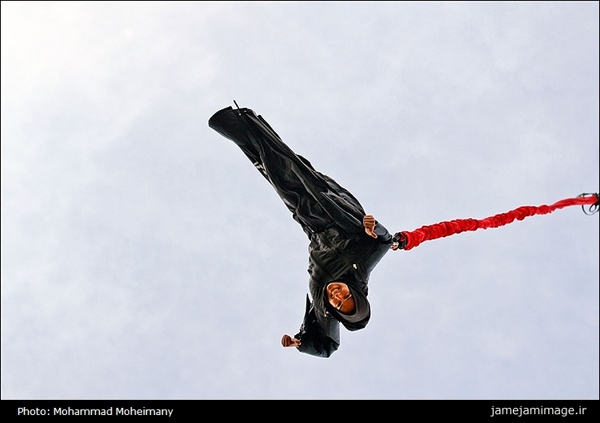 Unlike many men who go back on their decision to bungee jump, I have never seen a woman on a bungee-jumping platform back off, said a trainer in Tehran.

The mountain resort of Touchal in northern Tehran was the first place in Iran to put up a bungee-jumping pole (40 m in height). But women were not allowed to bungee jump there.

The following is the translation of a report filed by the Iranian Students’ News Agency on August 25 about the passionate interest of women in bungee jumping in Tehran:

Four years ago, another bungee-jumping center opened in Velayat Park in Tehran where women were allowed to jump off its 40-m pole. That attracted many tourists.

Even the holiday resort of Ganjnameh in Hamedan, which is home to the highest bungee-jumping pole in the Middle East, did not impose a ban on women keen on jumping off its 45-m-high platform.

It’s still unclear why unlike the other two centers, women are not allowed to go for the extreme sport in Touchal, nor has the reason behind the ban been officially announced, but some believe that religious issues may play a role in it.

Managers of Touchal are now seeking to lift the ban on the bungee jumping of women.

Interestingly, according to those in charge of bungee-jumping centers, female bungee jumpers outnumber men.

A bungee-jumping trainer at Tehran’s Velayat Park says 80 percent of those who apply for a jump are women aged between 14 and 60, adding, “I have never seen a woman climb up the pole and then back off, but there have been many men who have gone back on their decision to bungee jump.”