Will women be allowed to attend major sporting events? 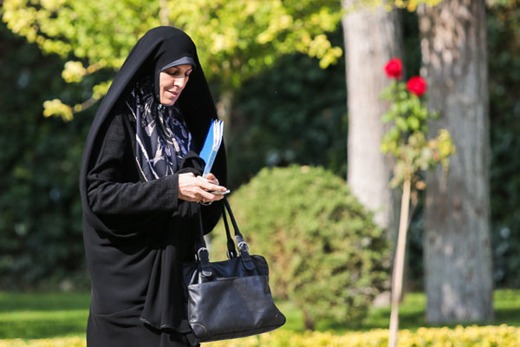 Iran’s vice-president for women affairs has talked in an interview about what government has done for women when it comes to presence in sporting arenas, broader representation in parliament and domestic violence.

With a little more than two weeks to go before Iran hosts the 2015 FIVB World League Finals, it is still unclear whether women will be allowed entry into the sporting arena. Shahindokht Molaverdi, vice president for women and family affairs, has recently announced that women’s presence in stadiums to watch volleyball matches has been given the final [official] approval. Nothing [confirmation or rejection] has yet come out of the Ministry of Sports and Youth, though.

[Observers say President Rouhani’s government has been put to the test with women who make up almost half of the country’s population eagerly waiting to see if the president makes good on one of his election promises: equal rights for women.]

Sharq daily on June 1 published an interview with Ms. Molaverdi on – among other things –whether or not Azadi Indoor Stadium will open its doors to women for the finals of the World League matches. The following is the translation of excerpts of the interview:

Which government body regulates the mechanisms needed for women’s presence in sporting arenas?

The Supreme National Security Council is not involved. Representatives from the Interior Ministry, Law Enforcement Force and the Ministry of Sports and Youth have held a number of meetings working out the required mechanisms.

Please elaborate on the mechanisms.

They will be announced later. I hope those mechanisms can ease the existing concerns in this regard.

You mean the Ministry of Sports and Youth has yet to communicate them?

I don’t know if they’ve been communicated or not. I’ll talk about it with Mr. Goodarzi, the sport minister, when the Cabinet meets.

Last year you held talks with the parliament speaker about greater representation of women in the Islamic Consultative Assembly. What has been done to give women a broader share of responsibilities in the chamber?

[…] In the meeting with the parliament speaker I suggested that in provinces which have more than five representatives at least one deputy should be female. This would see a remarkable rise in the number of female MPs. Presently the ideal representation would be 30 percent.

Later we realized that the Expediency Council is discussing the generalities of election policies in the country. We compiled and submitted to the Council a detailed contrastive analysis of female representation in Iran and in other regional countries, especially in Islamic states.

We also sent a letter to Ayatollah Hashemi, asking him to take into account measures to gradually increase the number of women deputies in the Islamic Consultative Assembly and in city and village councils when adopting the general policies of the elections. […]

Have you personally talked with Ayatollah Hashemi Rafsanjani? Where does he stand on that?

I have sent him letters. It seems he holds a positive view on that and has raised the issue in one of [the Council’s] sessions. We are now lobbying for that.

What about Mr. Larijani?

He also agrees to that, implicitly though.

Would you tell us about punishment for violence against women?

Currently, the penal code envisions a series of punishments, but the objective here is to remove domestic violence from the [list of] general crimes and treat it as a specific intent crime. The latter calls for special treatment as well, especially the violence that is committed inside homes which are supposed to be a safe for people. The same thing applies to children too. […]

What about the acid attacks victims? Has any measure been taken to support them?

[…] Marziyeh Ebrahimi and Soheila Jorkesh, two acid attack victims in Isfahan and Tehran respectively, are undergoing treatment in the capital. The health minister is very sensitive about their treatment and closely follows it. […]