How will it be after King Abdullah? (PART 2) 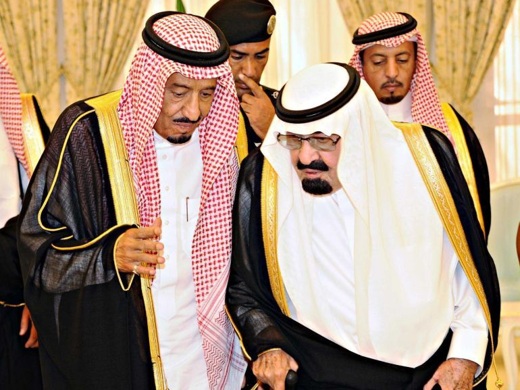 King Abdullah formed the Hay’at al Bay’ah (Council of Allegiance) [which was announced in 2006 and composed of the sons, or their descendant representatives, of King Abdul-Aziz al-Saud. The mission of the council is to elect the king and his crown prince.] Several princes have failed to pledge to honor the council’s decisions.

So mere selection of a king does not spell an end to the crisis, as it has been the case in the past following the ascension to the throne of five sons of Abdul-Aziz: Saud, Faisal, Khalid, Fahd, and Abdullah. Two of the kings were killed by the Al Saud family. This shows that the succession to the throne has done nothing to resolve the crisis in Saudi Arabia.

The selection of Prince Salman as king and Prince Muqrin bin Abdulaziz as crown prince means that King Abdullah’s choices are likely to be reinstated. This shows that the kingdom has accepted to maintain the status quo inside the country because any change in the leadership lineup will create tensions. […]

That the new monarch is suffering from Alzheimer’s disease shows that Muqrin will in fact take over the kingdom. In other words rivalry for succession to the throne between the princes seems unlikely to come to an end because a large number of third-generation princes hope to rise to power. The fierce rivalry is growing between the sons of Sultan, Faisal and Fahd. They have all set their eyes on the corridors of power, and denying these princes the throne would come with dire consequences.

The removal of Prince Mutaib bin Abdullah, the commander of the National Guard, from his post and appointment of Mohammed bin Nayef as deputy crown prince [second-in-line to the Saudi throne] indicate that there are differences of opinion in the Saudi political system, and such decisions could be tenuous. […]

To restore calm to the kingdom, Salman needs to focus on domestic conditions and this could prepare the ground for a thaw in strained ties between Saudi Arabia and Iran. King Abdullah succeeded in pushing down oil prices from $113 a barrel to around $40 after he managed to establish stability and calm inside Saudi Arabia.

Saudi Arabia took such a risk because it felt confident about what was going on inside and outside its borders. The prices may rise when Riyadh faces instability.

As many as 7,000 members of Al Saud family are said to hold all posts in the country; of course, the share of princes – direct descendants of Abdulaziz – of sensitive posts has been larger than others. That makes Saudi Arabia unique when it comes to administrative affairs.

Salman’s nominal assumption of power comes after he was appointed crown prince in 2012. During his three years as heir to the throne, he kept a low profile, mainly because of illness and left the day-to-day administration of affairs to three men – Bandar bin Sultan, Muqrin bin Abdulaziz and Mutaib bin Abdullah. The rise to power of Salman seems to be meant to gloss over what is going on inside the kingdom. […]

An American team based in Saudi Arabia evaluated the Saudi situation over the past three months sending alarming reports to Washington and trying to manage divisions among the princes. […]

The dismissal of Mutaib is a key question here. As the Minister of the National Guard, he enjoyed great powers during the final three years of King Abdullah’s rule and was in charge of sensitive foreign cases including Iraq, Syria, Lebanon and Egypt. He used to represent the king in important meetings too.

Saudi Arabia is an important country for the US whose domination over the kingdom over the past seven decades has guaranteed America’s influence in the world. […]

About 20 years ago, former Secretary of State Henry Kissinger openly said that Al Saud is not the owner of Saudi Arabia; they are the guardians of the US warehouse and get money for what they do.

However that does not mean that the Americans have the Saudi developments under control. […] Al Saud has run the internal affairs of the kingdom in line with a plan that is not confined to the borders of the kingdom and will go ahead with that plan. The demise of Abdullah, who was the most powerful king after Abdulaziz, along with the power vacuum within Al Saud family makes it more likely for the US to meddle in the Saudi internal affairs. […]

The death of the Saudi monarch has coincided with developments in Yemen. One day before the announcement of Abdullah’s death, the Saudi-backed Yemeni president was forced to resign. […]

A Yemen no longer under the influence of Saudi Arabia will seriously undermine the kingdom’s geopolitical position. The victory of Iran’s Islamic Revolution overshadowed the role Riyadh used to play in the Persian Gulf and the Strait of Hormuz. Now the victory of Ansar Allah [the military wing of the Houthis Movement] and Al-Herak Al-Janoubi [South Yemen Movement] will erode the Saudi role in the Red Sea and Bab el-Mandeb Strait. […] The victories of Shiites in the kingdom’s neighbors to the north and southhave tipped the balance against Saudi Arabia.

Bureaucratic processes form the outlines of the Saudi foreign policy. A number of influential elites manage key political cases including those of Syria and Iran. In the past King Abdullah directly supervised the decisions made in these cases.

He was an influential figure of the Sudairi Seven and was traditionally in favor of regional stability and ties with key countries like Iran. […]

The Sudairi opted for détente in foreign relations, but their rivals were known for their radical approaches, especially in dealing with Syria and Iraq. They were given a greater role to play when King Abdullah faded into the background due to illness. Radical groups managed – to some extent – to advance their hardline agenda, especially after revolutions sparked by the Arab Spring.

King Salman seems likely to follow in the footsteps of his predecessor. Since the Saudi policies – after going through trial and error – have hit a snag in areas such as the fight against extremism, observers predict that the new king would put improvement of ties with key regional nations like Iran and Iraq top on the agenda. Furthermore, Abdullah’s sons who enjoy greater power in the new political structure can pick up where their father left off.

Tehran-Riyadh ties are not simply a question of the interests of the two countries’ leaders; other regional and trans-regional players have a say too. These players need to be managed in a way that their involvement remains minimal.

Accordingly, the two countries can – in the midterm – come to a mutual understanding of common interests such as the fight against extremism, terrorism and anti-Islamic movements. In the long run, a drastic drop in oil prices can be a threat to the two nations.

If the new Saudi rulers opted for cooperation, the two sides can define areas they can work together and repair ties.

Now that a new leadership has taken over in Saudi Arabia, Iran needs to announce its official stance openly so that the stance of certain non-governmental groups, which are viewed by the Arabs as opponents of interaction and détente, is not taken as the official stance of the Islamic Republic.

The Saudis too are expected to end their double-standard policies on Iran and let the voice of those favoring cooperation with Iran be heard louder.

There is a reason why Iran’s friends meticulously monitor Tehran’s reaction after the Saudi monarch’s death. They believe that a trip by a high-ranking Iranian delegation to Riyadh to attend a memorial of the late king could be a turning point in efforts to mend fences.