How will it be after King Abdullah? (PART 1) 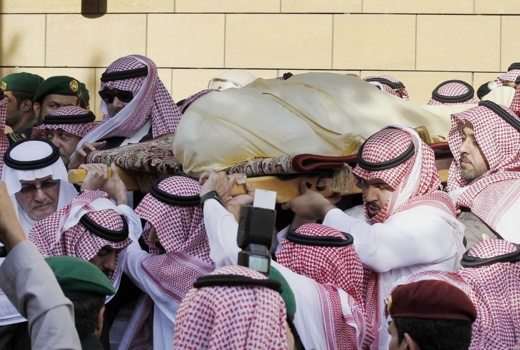 Will accession of a new king in KSA transform Iran-Riyadh ties?

The new Saudi King has been described by analysts as a more conservative traditionalist than his predecessor King Abdullah. King Salman, who is apparently suffering from Alzheimer’s, is not much interested in reforms and fundamental changes. A case in point is the new king’s first speech after accession to the throne in which he said he would follow in the footsteps of

King Abdullah and try to bring Muslim Arab nations together.

There has been little mention of Iran in the remarks of the new Saudi king, so his personal approach to ties with this neighbor and archrival – Iran – cannot be interpreted. However, one should bear in mind that the foundation of the Saudi ruling system is so conservative that the change of monarch cannot transform the political system.

Besides, labyrinthine and convoluted corridors of power in the Saudi royal family have added sophistication to political decision-making in Riyadh. Such sophistication renders a shift in Saudi foreign policy toward Iran all but unlikely.

The 79-year-old king is said to have reinstated Saud al-Faisal and Ali al-Naimi as foreign and petroleum ministers. The two ministries these two individuals will continue to run handle the bulk of Saudi Arabia’s relations with Iran. In fact, they are the main sources of disagreement between the two nations.

However, who takes the helm of the General Intelligence Presidency (GIP), a position that could have an impact on Tehran-Riyadh relations, is important too.

The job of the intelligence chief was taken by Khalid bin Bandar after Bandar bin Sultan – an anti-Iran Saudi Prince – was forced to resign. The current president of GIP does not seem to be an influential figure in the Saudi power structure and is unlikely to play a significant role on the foreign policy front.

All in all, the prospects of rapprochement between Tehran and Riyadh in the short run following the passing of King Abdullah seem to be overoptimistic. In addition, a succession crisis within the Saudi governing system will be unlikely as long as King Salman and Crown Prince Muqrin remain in power. Therefore, we should draw up a logical strategy which brings together strange bedfellows such as interaction, threats and negotiations rather than wait for a change of leadership in the kingdom.

On the foreign policy front, King Abdullah tried to reduce the kingdom’s dependence on certain powers and develop relations with other nations which were not on the list of Saudi Arabia’s traditional allies. He tried to upgrade contacts with Russia. Although the upgrade came in tandem with efforts by Riyadh to maintain its ties with traditional Western allies, the US in particular, it was something unprecedented during the reign of his predecessors.

The new Saudi king announced in his first official statement that he would follow the policies of King Abdullah. But due to his illness, real power rests with Crown Prince Muqrin bin Abdulaziz, who – unlike his 34 brothers – is a technocrat familiar with world developments.

At a time when international relations are tense and the kingdom is grappling with many regional problems, from both Arabic and Islamic perspectives, Saudi Arabia’s new policies are still shrouded in ambiguity.

It is no secret that King Abdullah took positive steps toward improvement of Saudi ties with the Islamic Republic of Iran, both during his rather long stint as crown prince when he was the de facto ruler of Saudi Arabia for a few years thanks to the ailment of Fahd, and later during his own rule.

The conclusion of a [historic] security agreement between Tehran and Riyadh [back in 2001] during the tenure of President Mohammad Khatami is one good example of growing ties between the two countries. Opponents of King Abdullah’s policies in Riyadh have contributed and are still contributing to mounting tensions [between Iran and Saudi Arabia].

Now that King Abdullah has passed away and Salman has assumed power in the kingdom, a window has opened for the two nations as far as their mutual ties go. As a powerful regional player, Iran can take great advantage of this opportunity. Dr. Mohammad Javad Zarif’s long overdue trip – although he is officially in Riyadh to express condolences to the Saudis – can be a first step by Iran toward better interaction with regional countries, especially Saudi Arabia.

Moreover, the current crude prices can be adjusted courtesy of a positive approach by Saudi Arabia and Iran. The Islamic Republic, which has appointed one of its outstanding experts as its ambassador to Riyadh, has taken a practical step toward that goal. Saudi Arabia is also expected to name its ambassador to Tehran soon. That would allow the two envoys to lead the way in carefully monitoring bilateral relations.

Ayatollah Hashemi [Rafsanjani] still has considerable potential and great power to repair ties with Riyadh in the new Saudi atmosphere. The potential of other national figures can also be tapped into to help the government of President Rouhani.

Across the Persian Gulf, Crown Prince Muqrin – as a young technocrat in the Al Saud family – enjoys high capacity to mend fences. To do this, a correct understanding of the future conditions of the Arab-Islamic world and non-insistence on the unstable power components in the region are needed.

Riyadh waiting for seismic shift on the political front

In the tribal structure of the al-Saud dynasty, old age has proved to be the Achilles’ heel. King Abdullah has passed away at a time when domestic and foreign crises won’t leave Riyadh alone for a moment.

The hefty investment in IS and al-Nusra terrorists by the al-Saud family has resulted in utter failure. On the other hand, Middle East developments are moving in a direction that will eventually deal a blow to the clout that the sons of Abdulaziz wield. What is happening today among other places in Bahrain, Yemen and Syria is a reflection of this fact.

Saudi princes won’t accept the transition of power easily and this will become the Achilles’ heel of the kingdom. That will erode the influence Saudi Arabia has on its Arab allies. For instance, the row which broke out between Qatar and Saudi Arabia in the Persian Gulf Cooperation Council (PGCC) is an indication of chronic, deepening cracks opening up among PGCC member states.

The West tried to cast King Abdullah as a “political reformist”! The superficial reforms the late king introduced, for instance in the cabinet, prompted US Democrats to describe him as a symbol of reformism! However, there was little difference between the late Saudi monarch and his predecessors.

Hope should not be pinned on new Saudi King

The demise of King Abdullah and the change in the kingdom’s political structure have sent shockwaves across oil markets. What approach the new Saudi decision makers adopt remains to be seen. If they follow the past policies, no noticeable change can be expected to take place.

The Saudi King’s demise was received as a shock and caused a 2 percent rise in crude prices. Since the hike in prices has not been the result of a change in supply and demand or oil policies, it will come as no surprise if the upward trend in prices is short-lived.