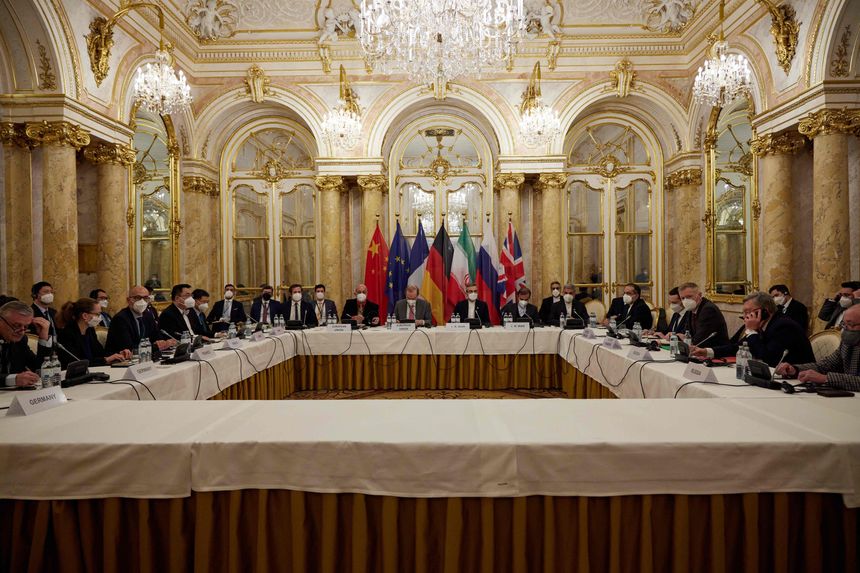 Showing more optimism since late last year, Western diplomats believe a pathway to a deal with Iran over its nuclear programme is possible in Vienna. The diplomats say they don’t believe the demand for guarantee from Washington is designed by Tehran to simply drag out the negotiations.

Diplomats involved in the talks in Austria say one of the biggest obstacles is Tehran’s demand that Washington provides a guarantee that it won’t again quit the pact and reimpose sanctions.

The demand, a reaction to former President Donald Trump’s withdrawal from the 2015 nuclear deal, appears to be a paramount political objective for the government of Iran’s President Ebrahim Raisi, US and European diplomats said. The diplomats added they don’t believe the demand is designed by Iran to simply drag out the talks.

The US has consistently said no president can legally tie the hands of a successor without a treaty that would need to garner the backing of two thirds of the Senate. Washington has also added the current talks should remain focused on restoring the 2015 deal, not seeking new commitments on both sides.

The standoff over guarantees comes amid what US and European officials say are signs of progress in the Vienna talks.

Western diplomats say a pathway to a deal is possible, showing more optimism since December when Iran’s demands left negotiations on the brink of failure.

There has been progress on the fine print, including how sanctions would be lifted, how Iran will scale back its nuclear work, and how a deal might be implemented over several months.

However, Western diplomats warn that a range of core political decisions on sanctions, nuclear steps and sequencing of an agreement must still be made and many worry whether Tehran is willing to cut a deal quickly enough. Western officials have repeatedly warned that the window for talks is closing given the advances in Iran’s nuclear work.

The US and European officials are privately eyeing mid-February as the moment to decide whether the diplomacy is exhausted.

Tehran says the Iranian negotiators in the negotiations on removal of US sanctions will continue their presence in the Austrian capital as long as needed and will not pay attention to the deadlines set by the other sides.

“Washington should announce its decisions regarding the remaining issues and lifting of the sanctions,” he added.

By demanding an ironclad US commitment to a deal, Iran’s concerns highlight a key weakness in the 2015 agreement. The deal was never signed as a treaty with clear legal guarantees. Its formal name—the Joint Comprehensive Plan of Action—underscored this was a set of political commitments, albeit pledges that were later backed up by a UN Security Council resolution.

Last spring, when talks to restore the deal started, Iran put a US pledge not to leave the deal again on its wish-list, alongside other demands such as compensation for Washington’s 2018 withdrawal. Western diplomats felt that was largely for domestic show and that Iran would likely scale down its requests.

Last spring, under the previous Iranian government, Tehran did modify its position—saying it wanted a guarantee that Washington would stay in the deal as long as President Joe Biden was in office. The new team, under President Raisi, has gone back to the original permanent guarantee demand.

In recent weeks, Western diplomats say they have started to see the demand for guarantees as a crucial objective for Raisi’s negotiators.

In recent months, Washington has started to respond to Iran’s concerns.

In November, on the sidelines of the Group of 20 nations in Rome, Biden and the British, French and German leaders issued a statement that was designed to address Iran’s concern head-on, diplomats say.

“In this spirit, we welcome President Biden’s clearly demonstrated commitment to return the US to full compliance with the JCPOA and to stay in full compliance, so long as Iran does the same,” the leaders stated.

Yet Iran has dismissed verbal pledges. A problem, Western diplomats say, is that Iran has at different times sought different types of assurances from Washington—political, economic and legal. Also complicating a solution: Iran refuses to negotiate directly with the US.

The US and European officials say they are exploring ideas to put to Iran which could generate additional confidence. Ideas that are being weighed are promises of letters of assurance from the US Treasury Department for an agreed list of international banks and companies or a political commitment to some kind of phase-in of future sanctions. Yet these would fall short of ironclad, legal guarantees.

”Basically, there are proposals on the table on how economic operators can get some comfort if a new American administration reimposes sanctions,” a person close to the talks stated, adding, “In a democratic country, in three years time, [there] can be a new president and things can change. So we are working on that but there are no real magic ideas.”

During the seventh round of the Vienna talks, the first under President Raeisi, Iran presented two draft texts which address, separately, the removal of US sanctions and Iran’s return to its nuclear commitments under the JCPOA. Tehran also said it was preparing a third draft text on the verification of the sanctions removal.