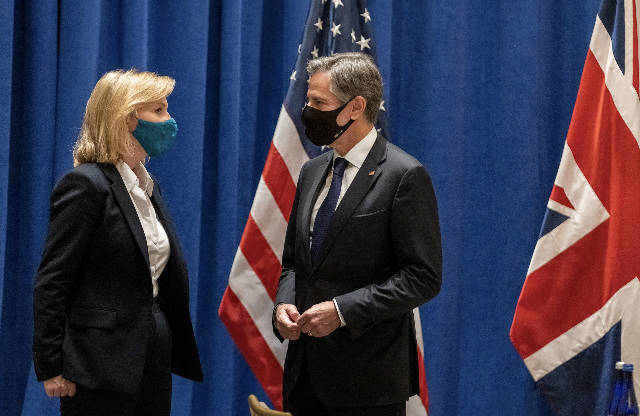 US Secretary of State Antony Blinken held a phone talk with his UK counterpart Elizabeth Truss on the nuclear negotiations in Vienna and the situation around Ukraine.

“Secretary Blinken emphasized the importance of working with our NATO Allies and European partners in the region to impose swift, severe costs on Russia in response to any further military aggression by Russia against Ukraine,” he added.

Over the last few months, the West has repeatedly accused Russia of planning to invade Ukraine, though Moscow categorically denies this claim. Allegations of an imminent attack have also been downplayed by Kiev. In an attempt to de-escalate the tensions, Russia has presented the US and NATO with a number of proposals on security guarantees. The bloc has rejected Moscow’s key proposals, however, including putting an end to NATO’s gradual enlargement eastward.

“They also discussed that international efforts should continue to seek a meaningful dialogue with Russia on mutual security concerns that could lead to a diplomatic resolution. Secretary Blinken reaffirmed that any decision the United States makes in Europe will be in consultation with our Allies and partners,” Price stated.

Russian President Vladimir Putin had telephone conversations with Presidents of France and the United States Emmanuel Macron and Joe Biden on Saturday. Conversations were held at requests of Paris and Washington and the situation around Ukraine expectedly became their key topic.

The Russian leader reminded his counterparts that the West does not do enough to force Ukraine to perform the Minsk Agreements and noted the Russian response to the US and NATO answers on security guarantees will be presented shortly.

Paris said after the conversation that they do not believe that Moscow “is preparing an offensive” against Ukraine, while Washington stated that it is still unclear for them whether Russia plans to achieve its goal diplomatically or “by way of using force”.

“The two presidents agreed that our teams will stay engaged in the days ahead,” he stated, adding, “Russia may decide to proceed with military action anyway. Indeed, that is a distinct possibility.”

Kremlin Aide Yury Ushakov also told reporters on Saturday Biden in his phone conversation with Putin mentioned sanctions, but the issue was not in the spotlight of the talks.

Price has also stated “the two also discussed UK-EU negotiations over the implementation of the Northern Ireland Protocol and preserving the gains of the Belfast/Good Friday agreement, as well the importance of reaching a successful conclusion on talks with Iran on mutual return to full implementation of the Joint Comprehensive Plan of Action”.

Nuclear talks between Tehran and world powers over revitalizing the Iran nuclear agreement have reached their final stage and are expected to conclude one way or the other by the end of this month, according to participants.