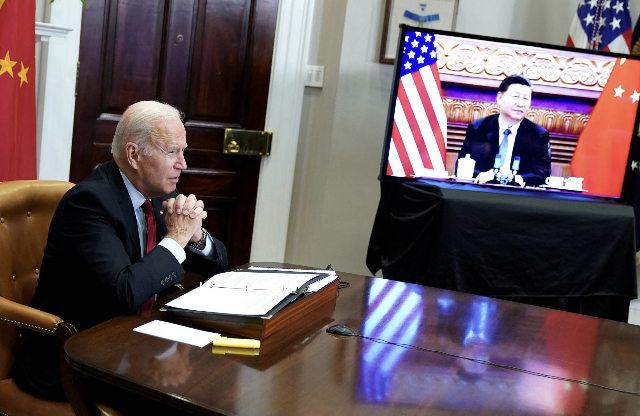 Presidents of the Unites States and China, Joe Biden and Xi Jinping, met virtually on Tuesday and discussed a range of issues including Iran. Beijing and Washington are at odds on several topics, including Tehran nuclear programme and the 2015 nuclear deal.

The two leaders have exchanged views on key regional challenges, including North Korea, Afghanistan, and Iran, according to a statement made public by the White House on Tuesday.

Biden also expressed concern over Beijing’s actions with regards to the Tibet Autonomous Region, the Xinjiang Uygur Autonomous Region and the Hong Kong Special Administrative Region during the video conference with Xi.

The US leader discussed with his Chinese counterpart the importance of a free and open Indo-Pacific region and conveyed the continued determination of the United States to uphold its commitments in the region.

“President Biden reiterated the importance of freedom of navigation and safe overflight to the region’s prosperity,” the statement added.

Additionally, Biden “was clear about the need to protect American workers and industries from the PRC’s unfair trade and economic practices.”

Biden noted that the US supports the “one China” policy during the video conference with Xi.

“On Taiwan, President Biden underscored that the United States remains committed to the ‘one China’ policy, guided by the Taiwan Relations Act, the three Joint Communiques, and the Six Assurances (in relations with Taipei), and that the United States strongly opposes unilateral efforts to change the status quo or undermine peace and stability across the Taiwan Strait,” the statement read.

Xi has said the one-China principle and the three Sino-US joint communiques are the political foundation for China-US relations.

“We are patient and willing to do our utmost to strive for the prospect of peaceful reunification with the utmost sincerity,” Xi stated, while warning that if “Taiwan independence” forces provoke the issue, or even cross the red line, the mainland will have to take decisive measures.

China is willing to conduct dialogue on human rights issues on the basis of mutual respect, but is not in favor of using human right to interfere in the internal affairs of other countries, Xi added.