‘US Seeking to Establish Taliban’s Islamic State in Afghanistan’ 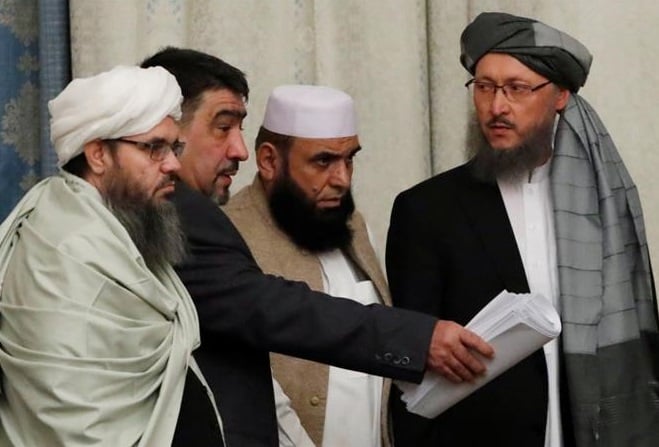 An Iranian expert in Afghanistan affairs refers to the ongoing talks between the US and the Taliban, saying Washington is seeking to establish an Islamic State in eastern and southeastern regions of Afghanistan through the Taliban.

In an interview with Entekhab website, Mohammad Mollazehi said the US special envoy for peace in Afghanistan, Zalmay Khalilzad has begun his talks with the Taliban since taking office with the aim of creating an Islamic caliphate  in Afghanistan by the militant group.

“Iran along with China and Russia, on the other hand, are of the opinion that through negotiations, they can have the Taliban serve as a block against the ISIS progress in the region but the US wants to establish an Islamic caliphate in eastern and southeastern regions of the war-torn Afghanistan,” he was quoted as saying in the interview.

He then added Iran decided to officially announce its ongoing talks with the Taliban after the US pulled Iran out of the current multilateral talks between some regional states and the militant group.

“Iran and the Taliban have been holding talks since long time ago, but had not officially confirmed the talks.  This time, however, the Islamic Republic confirmed reports on the talks because since Zalmay Khalilzad began his talks with the Taliban as the US special envoy for peace in Afghanistan, new developments have been unfolded,” he noted.

According to the analyst, during his talks with the Taliban in Abu Dhabi and Jeddah, the US envoy was trying to convince the Taliban that they can take power not through military campaigns but political process. “That’s why he is pushing the Taliban to hold talks and reach agreement with the Afghan government. He also calls on them to enter into Afghan politics as a political party and take power. This is, according to the US envoy, highly possible because the Taliban now holds 50 percent of Afghan regions.”

Elsewhere in his remarks, Mollazehi added, to his end, US President Donald Trump exerted pressure on Pakistan to take it onboard, and the US envoy arranged several meetings between the Taliban and some regional states including Pakistan in the UAE and Saudi Arabia without Iran’s presence.

“This was the main reason behind the recent visit by Ali Shamkhani, the Secretary of the Supreme National Security Council of Iran to Afghanistan. During the visit, he officially confirmed that Iran is now involved in talks with the Taliban and the Afghan government is privy to the talks. Some days later a Taliban delegation arrived in Tehran for talks with the Political Deputy of Iranian Foreign Minister Abbas Araqchi.

“The confirmation was aimed at sending a clear message to Khalilzad as well as the US allies that you can’t go ahead with any solution regarding the Taliban without Iran’s presence, and Iran takes steps in line with its national interests,” he said.

Mollazehi underlined that Iran had other reasons to publicise its talks with the Taliban. “The ISIS is relocating its forces to Afghanistan after suffering heavy defeats in Iraq and Syria. These forces are deployed to some security regions sensitive for either Iran, Russia or China including Fergana Valley that connects central Asia to Afghanistan or a region near eastern Turkestan which is fighting for independence from China.

“On the other hand, the ISIS has put its focus on western Afghanistan along with Iran border in areas like Helmand province. This has sounded the alarms in Iran,” he said.

The analyst said the US remains passive towards ISIS operations in Afghanistan. “Amid the current situation, it seems Iran, Russia and China have reached consensus on this issue that they are jointly threatened by a common enemy that is ISIS. So, they have decided to use the Taliban as a block against the ISIS because the two groups are at conflicts with each other over the future of Afghanistan.

Elaborating on the possible results of the talks between Iran the Taliban, he said it’s too early to speculate. “For the time being, the Taliban is holding three negotiations with the regional players. The first one led by the US envoy include Saudi Arabia, the UAE, Iraq and Pakistan. Their talks are aimed at handing over the eastern provinces of Afghanistan to the Taliban to establish an Islamic Emirate. On the other side, the Islamic Republic maintains that the US and its allies should not lead the talks with the Taliban but this is the Afghans themselves who should decide about their fate without foreign interference. But there is another player that is Moscow. It has already held some rounds of talks with the Taliban.

The Russian officials are seeking to create a regional consensus on the issue,” he said.