US Sanctions on Iran; Big Test for Erdogan 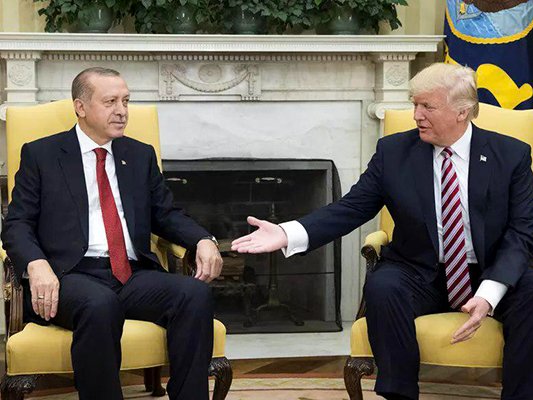 The Trump administration is engaged in intensive talks to persuade its European, Asian, and Middle Eastern allies to go along with US sanctions on Iran in a bid to increase pressure on Tehran, but it has yet to convince Turkey, a very important player in the region, to comply with its decision.

The US pressure on Turkey is on the rise. Trump has turned Turkey’s economic crisis into an opportunity for itself and has officially threatened that if Ankara does not comply with sanctions against Iran, it will be responsible for the consequences.

Hamid Qodsi Azar, in an opinion piece published by Tasnim News Agency, has said that the US is trying to overthrow the Iranian government quickly by creating economic crisis, and has prepared a two-stage economic boycott. The first phase will begin on August 6, but the main phase of the sanctions will come into force on November 4, which will ban the purchase of oil and gas from Iran.

Iran’s main revenue is through the sale of oil and gas, so the United States is trying to tighten the noose of sanctions on Iran by dissuading its energy clients from purchasing Tehran’s oil and gas, seeking to cause a domestic riot in Iran by creating economic crisis.

The US under George W. Bush had one policy: The countries of the world are either our friends or our enemies. At the moment, this policy is on the agenda of Donald Trump as well. The United States tries every possible way to prevent Iran from cooperating with Turkey and Russia. Washington knows well that the “Astana Process” has thwarted all of its plans for resolving the Syrian crisis. And if it can undermine Iran-Turkey relations, it would be able to easily reach its goals regarding Iran.

Turkey is a strategic country for Iran. It has a key role to play in boycotting Iran, and is the gateway of Iran’s access to Europe. During the war imposed by Iraq on Iran, the Persian Gulf was closed and an important part of Iran’s trade was carried out through Turkey. The US plans to close Turkey’s communication line with Iran.

Increased US Pressure on Turkey

The US’ pressure on Turkey is on the rise and Washington has turned Turkey’s economic crisis into an opportunity for itself. A few days ago, an American delegation headed by Assistant Secretary of Department of the Treasury Marshall Billingslea travelled to Ankara. The delegation first met with representatives of the private sector in Turkey. Then, at the Turkish Chamber of Commerce and Exchanges (TOBB), they met with businessmen and business owners. At the end of the meeting, Turkish merchants who had trade with Iran were very upset.

The Friday talks mainly focused on return of Washington’s sanctions against Tehran. Following the visit, Ankara announced that it will monitor sanctions. Reuters also reported that Turkey’s largest importer of petroleum in recent months has cut its imports from Iran.

According to information provided by a businessman at this meeting, US Treasury Assistant Secretary Billingslea has been treating Turkey as one of the US’ states and warned that if Ankara does not comply with US’ decisions, it will be punished. This businessman says Billingslea formally threatened Turkey with an emphasis on what the United States wanted to do, and finally said “If you do not comply with US sanctions against Iran, you will be responsible for the consequences.”

According to the Associated Press, following the visit, Billingsley assessed the talks with Turkey as “very positive” and said the parties did not have any “hostility” towards each other.

Official Meetings of US Delegation in Ankara

The American delegation held official meetings with officials from the Ministries of Foreign Affairs, Finance and Trade of Turkey. According to information leaked from these meetings, the same threats have been made during these meetings as well. The US delegation has explicitly stated that if Turkey does not comply with US sanctions against Iran, it will be deprived of the benefits of international credit institutions.

Turkey’s foreign ministry said after the meeting that it is monitoring sanctions, and Turkish officials are working to prevent the sanctions from having a negative impact on Turkey.

Turkish Foreign Minister Mevlüt Çavusoğlu also told Cumhuriyet that Ankara believes the sanctions are wrong, and has “told the American delegation visiting Turkey that we would not comply with the US decision on Iran.”

However, the United States has been devising some other plans for Turkey in Washington in the wake of the delegation’s visit to Ankara. Republican and Democratic senators have prepared a bill for ratification in the Senate, based on which Turkey will be denied access to loans from international organisations in the event of a violation of US sanctions against Iran.

Meanwhile, international credit institutions that are affiliated with US are issuing statements and reports one after the other saying that a rise in Turkey’s credit rating in the world is subject to complying with US sanctions against Iran. On the other hand, the United States is using the case of Turkish-Iranian businessman Reza Zarrab as a possible punishment on Turkish bankers.

Turkey’s Condition for Getting Along with US Bans

In the meantime, the Turkish newspaper Daily Sabah in an article titled “Will Turkey Get Along with US Sanctions on Iran?” wrote, “If US policymakers are determined to do what they want and force Turkey to take action against its own interests, nothing could dissuade them from their decision.”

The Turkish newspaper said, “If the United States wants Turkey to support sanctions against Iran, what Washington is supposed to do is to agree with Ankara on a broad regional strategy!”

Daily Sabah has also underlined Turkey’s conditions to comply with the US in imposing sanctions against Iran. First, there should be no difference between the two countries about what they want in Syria, including the future of the PKK terrorist group and YPG. Secondly, the United States should extradite Fethullah Gülen and members of the “terrorist group” that are operating in the United States. In addition, Washington needs to compensate for Turkey’s short and long-term economic losses over sanctions against Iran. At the same time, US officials should explain to Ankara how they are going to meet their natural gas needs that are currently provided by Iran. The need for natural gas is something that Turkey cannot ignore at the moment.

Ultimately this question arises: What will happen if the US does not respond to Turkey’s concerns altogether? This is the question raised by Daily Sabah, which refers to a statement by Trump’s former National Security Adviser Steve Bannon on Erdogan saying that leaders like Erdogan pursue the national interests of their country, and do not care about the fact what others are thinking about!

Importance of Stopping Iran-Turkey Trade for US

Iran and Turkey have broad business relations and plan to increase the value of their trade to $30 billion. Turkish Statistical Institute, a few months ago, announced the value of the two countries’ trade in 2017, with more than 59% growth compared to the previous year, stands at $10.51 billion.

In addition, in the previous round of sanctions that were cancelled with the implementation of the JCPOA, Turkey played a very effective role in detouring Iran sanctions. Therefore, the US delegation has travelled to Ankara to halt the cooperation of the two countries through threats and pressures in bypassing the announced sanctions.

Turkey’s Energy Market Regulatory Association announced a month ago that more than 50 percent of Turkey’s oil supply is being provided by Iran, and according to unofficial statistics, Turkey is purchasing about 8 percent of Iran’s total oil exports.

US officials have said oil buyers from Iran should end their oil imports from the Islamic Republic by November 4, 2018; otherwise, they will be subject to US secondary embargos.

Suspension of oil sanctions, which was announced by the President of the United States after the withdrawal of Washington from the nuclear deal, continues for six months i.e. till November 4.

US Secondary sanctions against purchasers of Iran’s crude oil, which are in contravention of international trade laws, have negatively affected several countries in a way that some countries are trying to exclude themselves, and some others have announced they will not implement them.

What Will Turkey Do?

FM Çavusoğlu said earlier that Turkey would not follow US sanctions on Iran. Turkish President Recep Tayyip Erdoğan also made similar statements, but Washington has started a lot of efforts to persuade Ankara. Meanwhile, experts in Turkey affairs say this has turned into a very complex and complicated issue.