US may push Iran to reconsider N-deal: Iran Judiciary chief 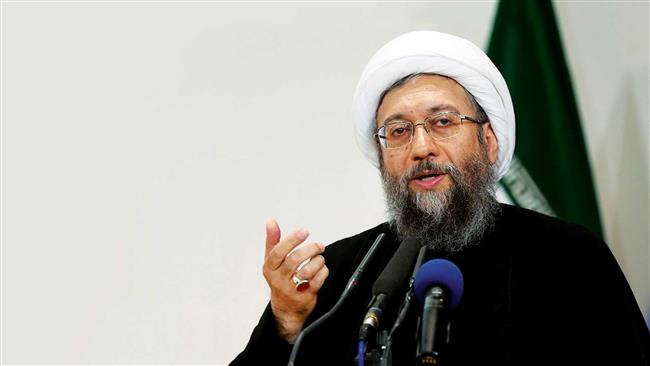 Iran’s Judiciary chief says US talks of of new sanctions against the Islamic Republic would force Tehran to reconsider implementation of a nuclear agreement reached last July.

“For them to say,‘we have lifted sanctions as regards enrichment, but we can adopt new sanctions for missile activities and the human rights issue’ is not sensible or acceptable,” Ayatollah Sadeq Amoli-Larijani said.

“With such an approach, they would take the Islamic Republic of Iran to the point of a revision on the JCPOA issue,” he said, in reference to the Joint Comprehensive Plan of Action.

Under the JCPOA reached between Iran and the P5+1 group of countries, the US is obliged to remove sanctions on Tehran.

The US administration, however, said last month it would announce new sanctions against nearly a dozen companies and individuals for their alleged role in developing Iran’s missile program.

While the White House delayed the sanctions announcement, it said the new measures remain on the table.

Washington slammed the test, claiming it had violated UN resolutions that ban the testing of missiles capable of carrying nuclear weapons. Iran says the missiles are not designed for that purpose.

Ayatollah Amoli-Larijani said new US threats show “the Americans are not committed to their pledges in practice.”

“Such instances of behavior reflect their internal differences,” he said.

“We ask executive officials to deal with this issue with vigilance and shut the door to deception of domineering governments,” Ayatollah Larijani added.

Elsewhere in his remarks, the Judiciary chief pointed to Saudi Arabia’s “irrational” behavior and activities, which he said, are tarnishing Islam’s image.

He referred to Saudi Arabia’s “inhumane” attacks against Yemen, saying they violate all international principles.

More than 7,500 people have been killed and over 14,000 others injured since the kingdom launched its attacks in late March.

Amoli-Larijani also touched on Riyadh’s decision to sever ties with Iran after assaults on Saudi diplomatic missions in two Iranian cities in reaction to the execution of Sheikh Nimr.

“Our country’s authorities denounced the incident, but Saudis used it as an excuse to attack Iran,” the Iranian Judiciary chief said.