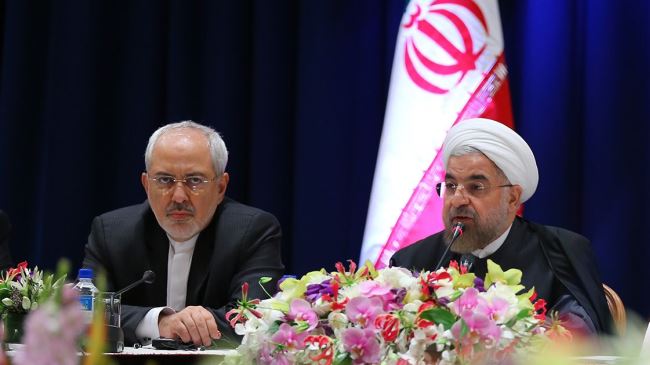 Iran’s President Hassan Rouhani says the US-led airstrikes in Syria are illegal because they are not approved by or coordinated with the Syrian government.

“Bombardment by one or several countries or even one coalition is meaningless without legal basis and can be considered aggression,” Rouhani said in a Tuesday meeting with a number of news editors in New York where he is to attend the annual session of the UN General Assembly.

He described as “contradictory” efforts to simultaneously combat terrorists in Syria while nurturing armed and terrorist groups against the government in the country.

“This contradictory behavior is not comprehensible that a country says I am fighting terrorism and simultaneously provides political assistance to groups opposed to a country’s central government and even trains some people outside the country and sends them into that country to fight and wage a war against the central government. This will definitely not end in success,” the Iranian president pointed out.

He stressed the importance of restoring stability to Syria as an important step to eradicate terrorism in the conflict-stricken country, saying, “First of all, stability must be restored to this country and restoration of stability in Syria will be impossible without the central government’s help even if there is criticism of the government’s performance,” Rouhani stated.

He emphasized that terrorism must be uprooted in Syria and grounds should be prepared for the return of Syrian refugees from neighboring countries such as Turkey, Iraq, Jordan and Lebanon so that the country will experience security and calm.

Pentagon spokesman, Rear Admiral John Kirby, said in a statement on September 22, that US army and “partner nation forces are undertaking military action against ISIL terrorists in Syria using a mix of fighter, bomber and Tomahawk Land Attack Missiles.”

The airstrikes came after Syrian Foreign Minister Walid Muallem in late August warned Washington against carrying out airstrikes on the Takfiri ISIL terrorists in Syria without Damascus’ consent.

The ISIL terrorists are notorious for carrying out horrific acts of violence, including public decapitations and crucifixion.