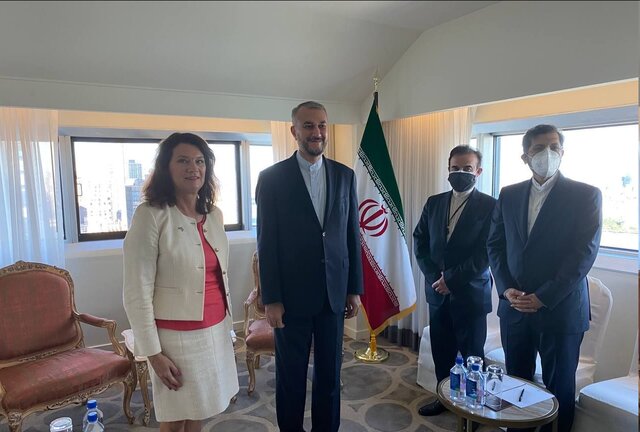 Iranian Foreign Minister Hossein Amirabdollahian and his Swedish counterpart Ann Linde held talks on bilateral ties and regional issues, including the situation in Yemen and Afghanistan during their meeting on the sidelines of the UN General Assembly in New York.

During the meeting, held on Friday, the Swedish foreign minister referred to the 400-year history of the relations between the two countries. She praised the Iranian expatriates living in Sweden as well-educated and added that she has personally visited Iran.

Linde noted that Sweden seeks expansion of ties with Iran and proposed a meeting of the joint political committee of the two countries to be held in Tehran in the near future.

She also touched on the crisis in Yemen, saying her country is committed to help end the crisis. The top diplomat added that Sweden is in contact with all sides in Yemen and considers consultations with Iran in this regard as essential.

The top diplomat also stressed that the crisis in Yemen does not have any military solution, saying the human crisis should be addressed through lifting of the [Saudi-led] blockade.

He added that the conflict in Yemen is an unequal war in which the people of the country are targeted in acts of cowardice.

During the meeting, Amirabdollahian also mentioned the trial held for an Iranian national in Sweden. He said the MKO terror grouping is behind the fabricated case and the inhuman plot.

The foreign minister stressed that the court should pay attention to the fact that all evidence and allegations presented to the court, are fabricated by a group, which is known to engage in falsification and deceit. He said this demonstrates that the court process lacks validity and is politicized.

During the meeting, the two sides also exchanged views on the Afghan situation and the latest developments in the country.