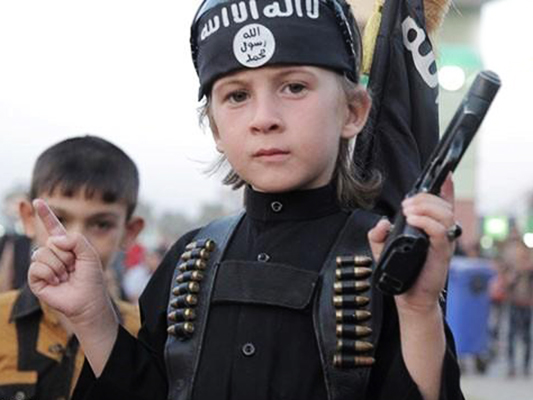 The reports that ISIS terrorists are teaching Saudi Arabia’s textbooks in their schools further prove the ideological commonalities between the two sides.

The point has grabbed more headlines after some officials in the US – an ally of Saudi Arabia – explicitly unveiled new evidence on the ideological relations between Wahhabism and the ISIS terrorists. The following report released in Farsi by the IRIB News Agency has shed light on the US officials’ contribution to the issue:

The Chairman of US House Subcommittee on Terrorism, Non-proliferation and Trade, Ted Poe, in a meeting called “Exploring Saudi Arabia’s Textbooks”, said that the ISIS terrorists teach Saudi textbooks at their schools.

Poe said Saudi Arabia simultaneously fuels and fights the flame of terrorism in the region, adding the textbooks taught at the schools of Saudi Arabia inspire extremism and serve as the base of the ideologies of terrorist organizations like ISIS and al-Qaeda.

Poe also said back in 2006 that Saudi Arabia had pledged to cleanse its hate-mongering curriculum of violence by 2008, but no concrete changes have been made yet in this field.

A brief review of Poe’s statements reveals that influenced by Wahhabism, ISIS teaches terrorist methods to students at its schools. The videos Released by ISIS show that the terrorist group has put its focus on training children how to fight. In Raqqa, the self-proclaimed capital of ISIS in Syria, the schools teach the students certain materials which prepare them for war and violence.

In a nutshell, ISIS draws on Wahhabism to brainwash the children and prepare them for big crimes. For example, ISIS teaches children how to carry out a suicide attack. In a strange mathematics exam in one of ISIS’ schools, the students were given amazing math questions: “How many weapons and ammunitions can a factory run by ISIS produce?” or “How many infidels can be killed in a car bomb blast?” The terrorist group also uses violent symbols like sword or weapon in teaching alphabets to the children.

The very fact that ISIS and Saudi Arabia use the same textbooks in their schools suggests the ideological commonalities between the two sides. There is no doubt that Wahhabi clergies have played a key role in the emergence and strengthening of the terrorist groups particularly ISIS in the region.

Patrick Cokburn, a contributor to The Independent, writes “The religious-education curriculum developed by the Wahhabi clergies is to be blamed for the spread of extremism… The ordinary people of Saudi Arabia are the best judges of the ideological meddling of Wahhabism in the education section of the country which paved the way for ISIS emergence.”

To put it differently, the terrorists of ISIS are the product of Wahhabism and the narrow account of Islam put forth by the Saudi Arabia. Wahhabism is the root of ISIS doctrine.

A former Democrat Senator, Bob Graham who once had called for the release of a certain report of the 9/11 Commission on the connection between Saudi Arabia and the hijackers behind the 9/11 attacks, says ISIS is the fruit of Saudi ideology, money and support.

On the commonalities between ISIS and Saudi Arabia, some analysts use the phrase “black and white ISIS.” In a piece published by New York Times, the Algerian contributor, Kamel Daoud writes, the Black ISIS cuts throats, kills and stones people, cuts hands, destroys humane legacies and ancient monuments and humiliates women and non-Muslims. The White ISIS commits the same crimes, but in disguise. The former one is ISIS and the latter, Saudi Arabia… Wahhabism is a depleted version of the ideology which ISIS draws on.

And the final word: It’s silly to think that the former US senator was concerned with human rights violations of Saudi Arabia when he called for the release of the report. As things stand, the US has always covered its role in the emergence of the terrorist groups like ISIS in the region. And now, it seems they are trying to point the blame finger at Saudi Arabian officials to pressurize them into giving more concessions to Washington.