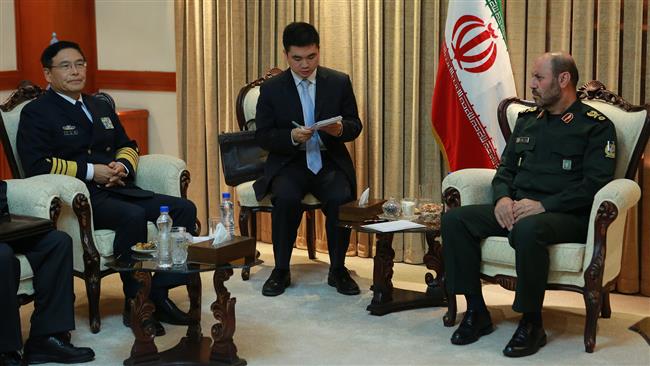 Iran’s defense minister has praised the “iron resolve” of the Yemeni people who have been resisting Saudi attacks, and lauded Russia’s efforts in battling terrorist groups in Syria.

The Iranian defense minister says “powerful regional coalitions” must be formed to block the US influence and its “resulting crises” in the region.

Brigadier General Hossein Dehghan made the remarks during a meeting with Admiral Sun Jianguo, the deputy chief of People’s Liberation Army General Staff Department, in Tehran on Wednesday.

“The US interfered in Iraq and Afghanistan, it occupied these two countries, then it promised the people welfare and security,” but all it did was aggravating the situation in the two countries, Dehghan said.

He praised the “iron resolve” of the Yemeni people who have been resisting Saudi attacks since late March, and lauded Russia’s efforts in battling terrorist groups in Syria.

Sun, who is in Tehran along with a high-ranking Chinese military delegation, also met with Iran’s Navy Commander Rear Admiral Habibollah Sayyari.

During the meeting, Sayyari stressed the need for further cooperation with China in maritime security.

Considering the constant presence of Iranian and Chinese vessels in the Indian Ocean, both countries’ navies should increase cooperation to provide security for the shipping lines active in the region, Sayyari noted.

According to reports, the military commanders also talked about intelligence exchange during the meeting, and expressed hope that a joint maritime committee would form to step up the collaboration.

During the meeting, Baqeri noted that battling terrorism, Takfiri groups, and extremism are the main focus of cooperation between the Iranian and Chinese military.