US Bases in Mideast to Become Insecure If IRGC Blacklisted: Commander 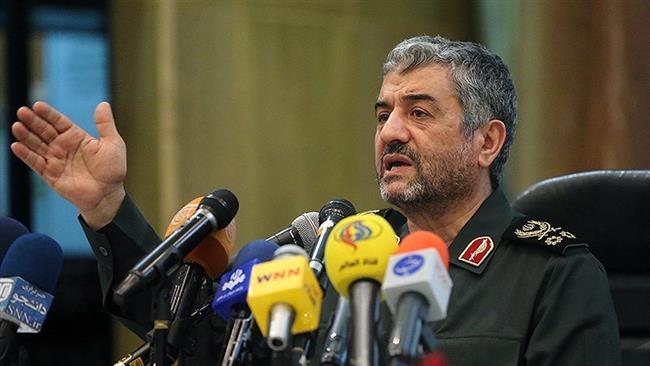 A top Iranian commander has warned against the repercussions of Washington’s possible designation of the Islamic Revolution Guards Corps (IRGC) as a terrorist organization, saying the move would cost the US dear.

IRGC Commander Major General Mohammad Ali Ja’afari said in the northeastern city of Mashhad on Wednesday that the US bases in the region would be insecure if Washington blacklisted the IRGC or imposed sanctions on Iran over its defense program.

“If the US seeks to pursue sanctions against [Iran’s] defense [program] and the IRGC, before that it should move its regional bases 1,000 kilometers away from Iran and it should know that it has to pay a high price for its miscalculation,” warned the top commander.

Underlining the significance of missile capabilities in promoting the country’s deterrence power, Ja’afari said that the IRGC was expanding the production of its missiles that could successfully hit targets with pinpoint precision, just as they did during a recent attack on the positions of Takfiri terrorists in Syria.

Last month, the IRGC fired six medium-range surface-to-surface ballistic missiles at Daesh bases in Syria’s Dayr al-Zawr, which killed more than 170 Takfiri terrorists, including a number of commanders and senior elements, and inflicted heavy damage on their equipment and systems.

The missile attack came after gunmen mounted almost simultaneous assaults on Iran’s Parliament and the Mausoleum of the late Founder of the Islamic Republic Imam Khomeini on June 7. The Daesh Takfiri terrorist group claimed responsibility for the assaults, which killed 17 people and injured over 50 others.

“Iran’s missile power in air, sea and on land is rapidly increasing, and this is an inalienable principle for us,” the IRGC commander added, stressing that Iran’s missile might is not up for negotiations.

Ja’afari said that the enemy regards a new war as harmful to its interests as all military and warmongering acts of the enemies in the region have backfired so far.

On Tuesday, the United States slapped new economic sanctions against Iran over its ballistic missile program.

Iran has recently made major breakthroughs in its defense sector and attained self-sufficiency in producing important military equipment and hardware. The Islamic Republic says its military power poses no threat to other countries and is merely based on the doctrine of deterrence.

US officials have also said that President Donald Trump’s administration was considering a proposal that could lead to categorizing the IRGC as a terrorist organization.