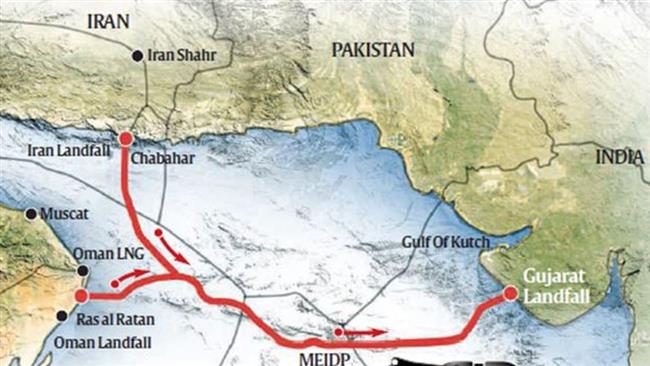 The Indian government is reportedly determined to seal a deal with Tehran on laying a direct undersea gas pipeline from Iran to India.

“The deal for the Iran-India undersea gas pipeline will be done. Matters have become easier as the US-imposed economic sanctions on Iran have been lifted,” the Indian daily, The Tribune, quoted an unnamed government official as saying.

New Delhi will also reportedly fund a rail link between Chabahar and Zahedan, the provincial capital of Iran’s Sistan-Baluchestan.

The railway will join the Iranian port with International North-South Transport Corridor (INSTC) to provide direct access to Central Asia.

India thus seeks to use the undersea gas pipeline to import natural gas from Turkmenistan.

The $4.5 billion pipeline will bring 31.5 million cubic meters of gas per day to India’s west coast.

Laying such a pipeline would need technical expertise for which a global consortium will lead the way.

A report by the Economic Times said last month that executives of Gail and Indian Oil Ltd (IOL) will meet Iranian officials to discuss the price of gas to be used in the pipeline which has to pass through the Sea of Oman and the Arabian Sea.

The paper said Oman might join the pipeline at a later stage, making it a trilateral initiative given its geopolitical proximity both to India and Iran.

Iran and Oman have already signed a deal to build an undersea pipeline to ship 20 million cubic meters per day of gas to the sultanate for a period of 25 years. The deal worth $60 billion also includes turning Iranian gas to LNG for exports.

India has sought to establish a direct gas link with Iran after Pakistan’s ‘foot-dragging’ in completing an onshore gas pipeline between the three nations.