UN must be cornerstone in Syria national talks: Iran 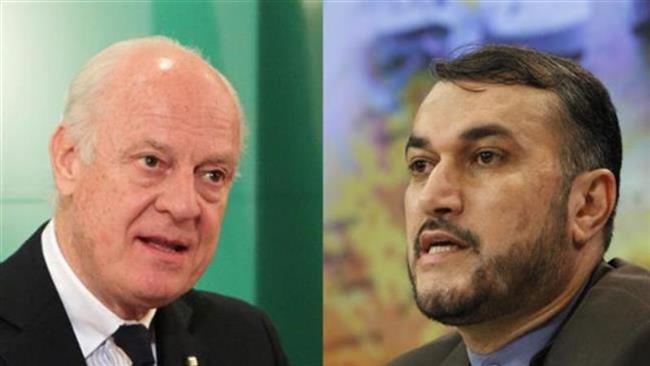 Iranian deputy FM said the crisis in Syria will only be resolved through respecting the country’s sovereignty, independence, national unity and territorial integrity as well as the Syrian people’s will.

A senior Iranian official says the United Nations must play a pivotal role in the Syrian national dialog aimed at finding a settlement to nearly five-year-long crisis in the Arab country.

Amir-Abdollahian underlined that the list of terrorist groups in Syria should not divide terrorism into good and bad and should be based on the recent talks in New York on the Syrian crisis. He also urged the international community to adopt a realistic approach toward fighting terrorism and promoting a political process in the Arab country at the same time.

He said the crisis in Syria will only be resolved through respecting the country’s sovereignty, independence, national unity and territorial integrity as well as the Syrian people’s will.

The Iranian diplomat emphasized that all Syrian parties, including the opposition groups that are committed to a political approach, should engage in the talks about the Syrian conflict.

“Therefore, the Islamic Republic of Iran believes that [Syrian] national dialog should be [held] with the United Nations as its cornerstone,” Amir-Abdollahian added.

The UN envoy, for his part, praised Iran’s constructive and positive role in previous international talks on the Syrian crisis in Vienna and New York.

He added that respect for the Syrians’ viewpoints as well as the maintenance of the country’s integrity are among the UN’s principles.

De Mistura expressed hope that intra-Syrian talks will be held by the end of December.

The UN envoy is reportedly scheduled to pay a visit to some regional countries, including Iran, ahead of a new round of talks on Syria.

The foreign-sponsored conflict in Syria, which started in March 2011, has claimed the lives of more than 250,000 people and left over one million injured, according to the United Nations. The foreign-sponsored militancy has also displaced nearly half of the country’s population.

The UN says 12.2 million people, including more than 5.6 million children, remain in need of humanitarian assistance.

Syria blames the crisis on some countries, including Turkey and Saudi Arabia, saying that if it had not been for their support, the terror groups, particularly the Daesh Takfiri terrorist group, could have never taken control of the territories across the country.

The Austrian capital of Vienna hosted the first two rounds of talks on Syria on October 30 and November 14. The third round of Syria talks was held in New York on December 18.

The UN Security Council on December 18 adopted a resolution supporting an international roadmap for a peace process in Syria. The UN seeks to convene peace negotiations in Geneva some time in January 2016.

The participants in the talks are trying to work out a list of legitimate opposition groups, as opposed to terrorists, in Syria to engage in talks with the government in Damascus.