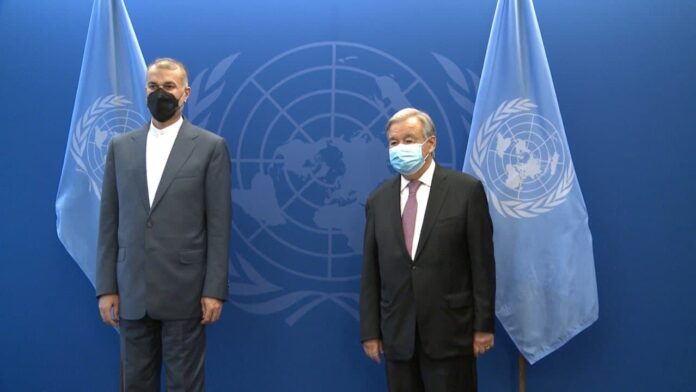 Iranian Foreign Minister Hossein Amirabdollahian has met with United Nations Secretary-General Antonio Guterres on the sidelines of the UN General Assembly and discussed cooperation with the world body and the situation in the region.

At the beginning of the meeting, which lasted more than 50 minutes, the UN Secretary General stated that he has been familiar with Iran for decades and has traveled to the country in different posts, saying the cooperation between the Islamic Republic of Iran and the United Nations is going well.

Referring to the UN’s principled stance in rejecting the US withdrawal from the Joint Comprehensive Plan of Action, Guterres said he always supported the nuclear deal.

Guterres called Iran’s position on Afghanistan a principled stance and said that he believes an inclusive government should be formed in Afghanistan so that all groups have a voice in the government. The UN chief also stressed the need to guarantee the rights of all groups, ethnicities and women in the future of Afghanistan.

Noting that the UN mission in Afghanistan has become much more serious, he clarified that Iran is a close partner in cooperation with the UN on all these issues.

Later in the meeting, Amirabdollahian stated that the relations between Iran and the United Nations, especially its secretary generals, have always been close and respectful, and thanked Guterres for his constructive vision and efforts for the world peace.

Amirabdollahian noted that the Islamic Republic of Iran supports the initiatives of the United Nations and welcomes the impartial and fair stances of the world body.

Stressing the need for the United Nations to play a serious and constructive role in the region, Amirabdollahian said: There is a need for a fair and responsible presence by United Nations everywhere, from Palestine to Syria, Yemen and Afghanistan.

Amirabdollahian added that after decades, the humanitarian situation in Palestine is still grave due to the actions of the occupiers and the crimes of the Zionist regime.

The final solution must be holding a referendum and a vote by the genuine residents of Palestine. Unfortunately, the United Nations has acted passively in the past, and I hope that will change in your tenure, Amirabdollahian told Guterres.

The Iranian foreign minister touched on the situation in Syria and noted that part of Syrian territory is under foreign occupation.

In the case of Yemen, this inhumane siege must end, he added.

The top Iranian diplomat noted that the United States uses sanctions against nations, uses terrorism against nations in order to advance its political goals, and the most obvious example of which was the cowardly assassination of general Soleimani.

In the end, the foreign minister stressed the need for a united voice by the UN against such brazen actions, stating: Of course, Iran is pursuing the case nationally and internationally to bring the perpetrators of the assassination of general Soleimani and his entourage to justice.