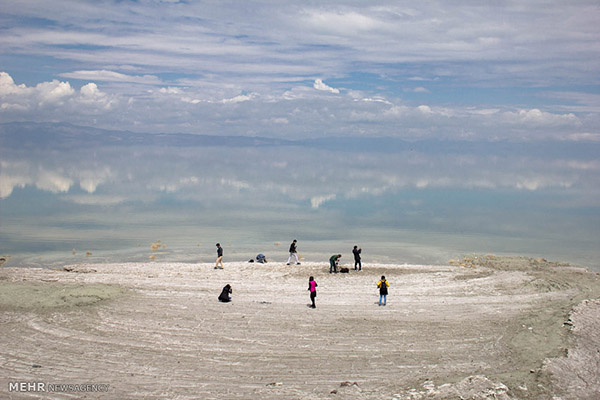 The water level of the dying Lake Urmia in north-western Iran has elevated by four centimetres compared with the previous year, said Masoud Baqerzadeh Karimi , Deputy Head of Iran's Department of Environment.

Baqerzadeh Karimi says currently two-fifth of Lake Urmia’s surface area is covered with water, adding, however, the water level of the lake is still low.

“Fortunately, the lake is now in a relatively good condition due to the last season’s rainfall. We expect further increase of the lake’s water level following the spring’s precipitation, melting of the winter’s snow and opening of dams’ floodgates,” he was quoted as saying in a Farsi report by ISNA.

He said at present the water level of the lake stands at 1270,67 centimetres which has increased by 60 centimetres compared with its lowest level.

“Meanwhile, the water level of the lake has increased by 4 centimetres compared with the last year,” he said.

As the Head of Wetland Affairs at the Department of Environment, Baqerzadeh Karimi said with the increase of the lake’s water level, its surface area covered with water reaches 212,000 hectares which shows a relative growth compared with the last year.

“At present, over two-fifth of the lake’s surface area is covered with water but unfortunately, the water volume of the lake is only 1.84bn cubic meters. This means that the lake’s water level is still too low and this puts it in a dangerous situation ahead of the hot season of summer,” he added.

Touching on the plans to restore Lake Urmia, Baqerzadeh Karimi said “we have made good progress in a number of fields like establishing channels and tunnels for transferring water, sealing illegal wells, making reforms to irrigation systems and creating plant cover around the lake.”

“To provide the financial credit, we need to seek resources other than the government like private sector as well as foreign investments,” he said.

He underlined that the plans to restore Lake Urmia will remain intact but the methods to implement them will undergo changes to speed up the restoration process.

Lake Urmia has been depleted drastically due to a variety of factors, including the construction of a causeway as well as several dams that have choked off water from the mountains on either side of the lake.

Five years ago, Iranian President Hassan Rouhani and his first cabinet launched a “task force” for the revival of Lake Urmia.