Trump’s ‘Art of the Deal’ Not to Work on Iran: Zarif 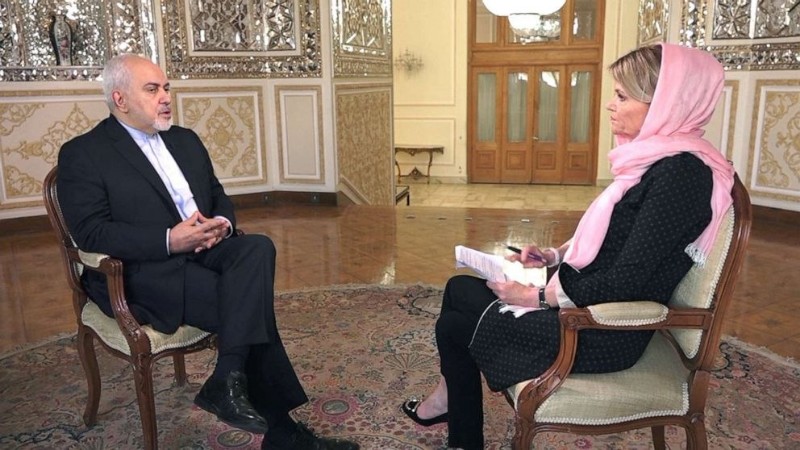 Foreign Minister Mohammad Javad Zarif says Iran will not be intimidated by US President Trump’s "art of the deal pressure" by using economic sanctions to push Iran to negotiate a new nuclear deal.

In an exclusive interview with ABC News, Zarif also told “This Week” Co-Anchor Martha Raddatz that “there will be consequences” if the United States keeps up its economic pressure campaign against Iran’s people.

Zarif labelled the new US sanctions as “economic terrorism” that “targets ordinary Iranian people” because even though food and medicine are exempted from the sanctions, the financial transactions associated with them are not.

“If the objective of President Trump is to impose pressure on normal Iranians, on ordinary Iranians, he is certainly achieving that,” Zarif said. “But he will not achieve his policy objectives through pressure on the Iranians.”

Zarif, however, said the prospects of potential talks are “not very likely, because talking is the continuation of the process of pressure.”

The foreign minister also noted that Trump’s business experience in real estate — as described in his 1987 book, “Trump: The Art of the Deal” — will not work with Iran.

“The only thing that works with Iran is respect,” he said.

Asked what message he would give directly to the US president, Zarif advised against threatening the country.

“I’ve said it before, threats against Iran never work,” he said during the interview. “Never threaten an Iranian. Try respect, that may work.”

Zarif dismissed the US claims that there was a new Iranian threat to the region and countered that it was the US Navy’s presence that was destabilizing.

“We call this place the Persian Gulf for a reason,” said Zarif. “It’s next to us. We have a right to defend ourselves.

“Just imagine if Iran were to come to California coast [or the] Florida coast,” he added. “How do you feel? How would you treat that? The United States is sending nuclear ships to our waters, to our vicinity.”

As for how Iran could respond in the future to what it considers further escalations, the foreign minister told Raddatz his country will take a page from the Trump administration’s playbook.

“I like to keep President Trump guessing because he likes everybody in the world to keep on guessing about what is happening in the United States,” said Zarif.

But Zarif warned that “there will be consequences” if the US continues adding more economic sanctions.

“If the United States decide to cause so much pain on the Iranian people by imposing economic warfare, by engaging in economic terrorism against Iran, then there will be consequences,” he said.

“We don’t differentiate between economic war and military war,” he cautioned. “The US is engaged in war against us, and a war is painful to our participants. We have a very clear notion that in a war, nobody wins. In a war, everybody loses the loss of some will be greater than the loss of others.”

“All options are on the table belongs to the time when the use of force was legal, and that is about 100 years ago,” said Zarif.

“What we say is that we exercise our self-defence. Self-defence is allowed. President Trump has announced that he is engaged in a war and economic war against Iran, and we have an obligation to defend our people against that economic war.”