Trump Still Not Sure What to Do with Iran Deal: Zarif 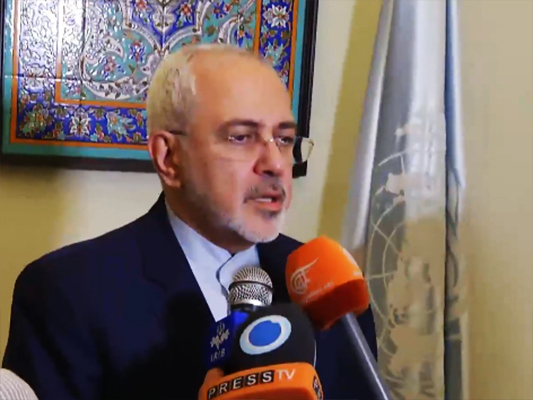 Iranian Foreign Minister Mohammad Javad Zarif says the US president himself has not yet decided what decision he is going to make about the Iran nuclear deal on Friday.

Speaking to reporters upon arrival in the Russian capital of Moscow on Wednesday, Zarif said it is not yet clear what decision Donald Trump will make on January 12, the date when he is expected to re-certify Iran’s compliance with the Joint Comprehensive Plan of Action (JCPOA).

“One of Trump’s policies is to avoid being predictable. However, he has gone to extremes in adopting this policy so much that the US is no longer much reliable for any of its partners.”

Asked if the Europeans know about Trump’s upcoming decision, Zarif said, “I don’t think even Trump himself knows yet what he is going to do, but Europeans for sure do not yet know what decision he will make.”

“If the international community is interested in the continued implementation of JCPOA, it must stand against any measure by the US against the nuclear deal,” he added.

Zarif referred to his visit to Moscow, which is being made ahead of his trip to Brussels on Thursday, and said, “While in Moscow, I will hold talks with Mr Lavrov (Russian FM) on the US’ destructive policies.”

“The international community has explicitly indicated that it does not support the US policies and consider them to be destructive,” he went on to say.

He pointed to the recent UN Security Council meeting on Iran and said, “The UNSC held a totally unnecessary meeting last Friday. We believe holding the meeting was basically a very wrong and dangerous move for the UN Security Council.”

However, he added, the US was totally isolated in the meeting despite the pressures it had exerted on the member states.

“Almost all countries whose envoys addressed the meeting underlined the implementation of JCPOA and the necessity of keeping it. This shows a consensus in the international community.”

“This global consensus must be translated into action. On the one hand, the US should understand this global consensus and revise its policies accordingly, and on the other hand, the international community needs to stand against any anti-JCPOA move by the US if it wants to maintain the nuclear deal,” he noted.

“This is what we will pursue in our talks on Wednesday and Thursday, and will wait for the next moves by other countries.”

He at the same time noted that Iran has various options and will consider its people’s interests when making decision. “In our view, our interests will be reinforced.”

The Iranian top diplomat further pointed to “strategic” relations between Iran and Russia, and said, “Russia is an important neighbour for us and a major member of the P5+1 group which played a very important and key role in the nuclear negotiations.”

“During the past two years, Russia has had a major role in the implementation of the nuclear deal, and we have enjoyed Moscow’s support in the UN Security Council in these two years,” he noted.