‘Trump Not after Scrapping Iran Deal; He Wants More Concessions’ 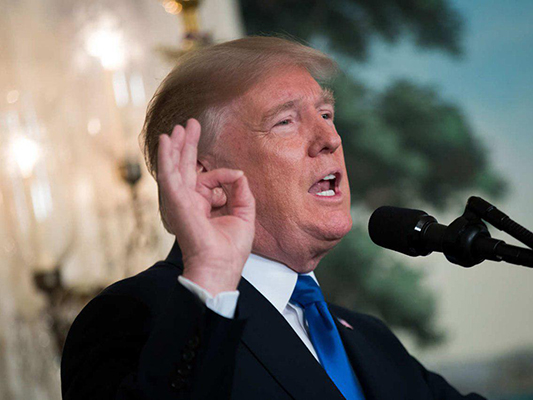 A senior Iranian journalist and political analyst says the US president wants more concessions from the JCPOA, not the cancellation of the agreement signed between Tehran and world powers.

Hossein Shariatmadari, the managing editor of the conservative Kayhan newspaper, has, in a Farsi article, reacted to the remarks by US President Donald Trump who, in his Friday comments, took a swipe at the Iran nuclear deal known as the Joint Comprehensive Plan of Action (JCPOA). Highlights of the opinion piece follow:

Trump did not give up the Iran nuclear deal despite months of sabre-rattling against the agreement. Trump knows the JCPOA constitutes dozens of concessions that Washington has taken from Tehran and given it a handful of promises, in return. So, it was predictable that Trump would not renounce it. His recent remarks also showed that he wanted more concessions, not the cancellation of the deal. Moreover, if the US considers the JCPOA detrimental to itself as supporters of the deal claim, then why does the US insist on turning the deal into a permanent agreement that would keep Iran restrictions in place indefinitely?

If Trump were not a criminal, we would pray for him to remain healthy because he unmasked the true colours of Washington and left no doubt, even to the most incredulous people, about the unreliable, charlatan and criminal nature of the US. This is a reality which if we wanted to explain to some naïve people inside the country, we would need a lot of money and effort. Of course, we should not leave Trump’s muscle-flexing and threats against our country unanswered. We must throw back at the enemy the stone it has thrown at us.

In his recent remarks, Trump showed that he is afraid of Iran’s missiles; so, the most effective reaction we can show would be to unveil intercontinental ballistic missiles which are Washington’s Achilles’ heel. Today, the US is somehow in our backyard because it has 50 bases and several thousand military troops in the region. Trump should know that neither is the region safe for US service members, nor are Washington’s strategic allies in the region immune from Iran’s wrath, allies such as the Israeli regime and some other puppet regimes in the region which serve US interests.