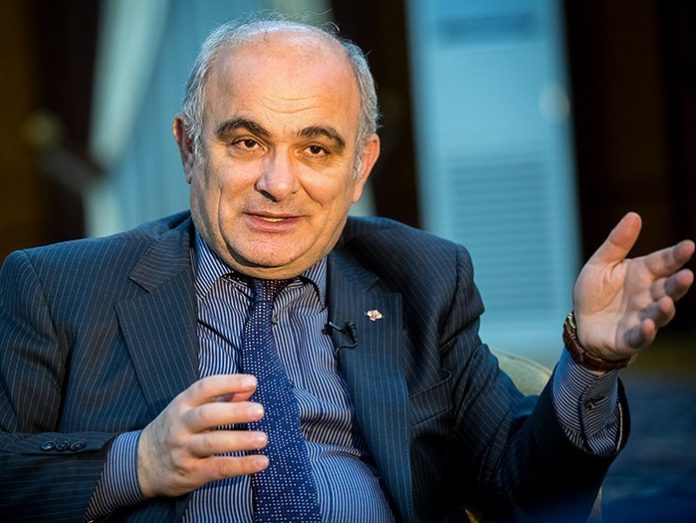 The Russian ambassador to Iran has rejected the US efforts to alter Moscow’s stances towards Tehran, stressing that strengthening relations with Iran is his country’s main foreign policy priority.

Russian Ambassador to Iran Levan Dzhagaryan has weighed in on the relations between Moscow and Tehran and the issue of Syria in an interview published on Saturday in Shargh Daily, saying fostering sustained relations with Iran is Russia’s major foreign policy priority.

According to a report by IFP, Dzhagaryan said Moscow strongly condemns the US missile attack on a Syrian air base, adding, “Russia’s missile defence systems failed to track the US rockets for the Americans had given us the heads-up just two hours prior to the launch of their projectiles and our defence systems are located only in the northwestern Syrian province of Latakia. As we have earlier announced, we will strengthen our missile defence system. Our response to the US attack plan was quite clear, serious and, definitely, negative.”

On April 7, the US military launched 59 missiles targeting an airbase in the Syrian province of Homs. Iran, Russia and Syria have repeatedly condemned the move by the White House.

He added the Russian government did not expect US President Donald Trump to carry out the attack despite his previous promises.

“As Russian President Vladimir Putin clearly said [a few days ago], trust between Russia and the US has deteriorated since Trump took office. This is because Trump and his moves are not predictable.”

Dzhagaryan noted that Russian Foreign Minister Sergey Lavrov has also clearly told US Secretary of State Rex Tillerson that the attack had been a violation of the international humanitarian laws and an effort to support terrorists and has asked Washington to refrain from making such moves without prior coordination with Moscow.

“In case fighting terrorists is our common goal, such unilateral moves against Syrian President Bashar al-Assad’s legal government should be avoided. Nevertheless, we will strengthen our missile defence system and wait to see what would be their [the US] next actions.”

Russian President Putin in a recent meeting with his Italian counterpart Sergio Mattarella in Moscow blasted the US plot to mount a poison gas attack on Damascus through Syrian rebels to, later, be able to blame it on al-Assad’s government and provide a pretext for further missile strikes on the country and possible change of the government.

Commenting on Putin’s remarks, Dzhagaryan stressed that in case such events and scenarios unfold, Russia will take necessary actions and measures.

“Currently, the Russian government has decided to take the necessary moves and measures. Unlike the US that first takes action and then thinks about it, we, primarily, carry out the required studies and do the required follow-ups and then make our decisions. Russia has asked the US to refrain from uttering threats. In the recent Group of 7 meeting in Italy, nobody supported the UK’s Foreign Secretary Boris Johnson, who had engineered the sanctions against Russia [in the firsts place], and no consensus was reached [over the imposition of threatening sanctions against Russia and Syria]. Johnson has cancelled his trip to Russia which implies that the UK plays no role [in issues concerning Syria] and Russia is required to hold talks solely with the US.”

The Russian ambassador stressed that this [Syrian] issue is very important, adding Moscow has repeatedly told the Western Europe countries that it does not need to hold dialogues with them [about the issue of Syria] as they are not independent and merely reiterating Trump’s decisions and remarks [about the crisis and condition in the Middle Eastern nation].

Rejecting Tillerson’s remarks urging Russia to unite with the US instead of bonding with Iran and Hezbollah, Dzhagaryan said, “We do not need to consult with the US. Russia’s policy is an independent one. They can issue directives to their allies, but we do not need to make such moves.”

He noted that Washington’s cooperation with Moscow in fight against ISIS is not in contradiction to Russia’s independence, adding his country is willing to collaborate with the US in fight against a common enemy, but requires each side to cooperate equally.

“We do not consent to the Americans leadership and, by no means, acquiesce to their command.”

In response to a question concerning the future of the strategic cooperation between Iran and Russia, in case of Moscow and Washington consenting to collaborate with each other on the Syrian issue, he said he sees no contradiction here.

“Firstly, we need to see what the Americans’ offer is. However, we will never consent to enhance our strategic cooperation with the US at the expense of our strategic collaboration with Iran. Iran has its own status and is among Russia’s foreign policy priorities, particularly, after the recent visit of Iranian President Hassan Rouhani to Moscow which turned out to be very fruitful. Our approach towards Iran is, in no way, impacted by Russia’s level of relations with the US. These are two separate issues.”

He said Russia’s expanded cooperation with the US does not imply that any deals the country makes with the White House will work to the detriment of Iran, adding, the state and type of Moscow’s cooperation with Tehran is quite distinct and well defined.

Both states are in the same front in Syria, he stressed.

“Other issues raised are all rumours spread by the BBC Persian which broadcasts untrue news.”

He noted that despite the Trump administration’s insistence, it is impossible for Russia to choose between Iran and the US, adding each of these two countries has its own position in Russia’s foreign policy.

“Such proposals [such as the one put forward by the US] are, in no way, debatable. We are the decision maker. If the US is interested in cooperating with us, we will also be willing to reciprocate. It is alright though if they do not seek to collaborate.”

The US imposes sanctions and Russia reciprocates, he said.

“Our response will be resolute and serious.”

Commenting on Moscow’s offer to Tehran to sell Sukhoi, a Russian aircraft manufacturer, airliners to Tehran, the Russian envoy said his country has voiced willingness to sell Sukhoi Superjet 100 to Iran.

“In case the Iranian side is interested in the offer, there will be no problem.”

Dzhagaryan stressed that Trump’s entrance into the White House will have no impacts on ties between Iran and Russia as the two countries’ level of relations is at its peak.