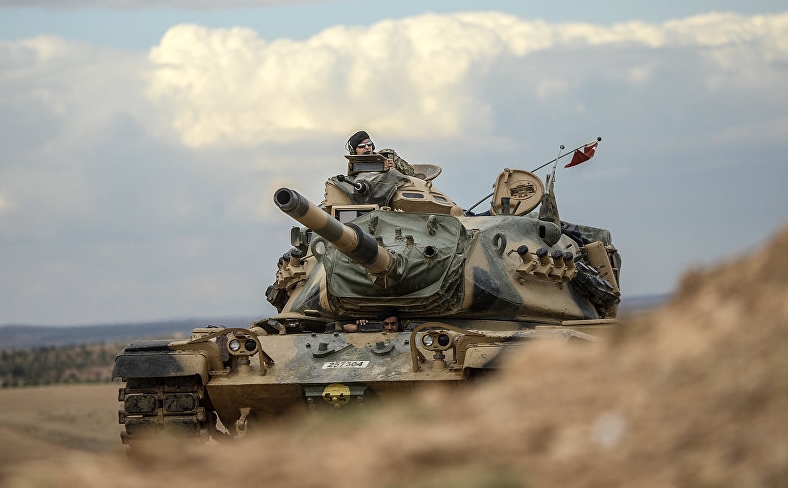 Turkey thinks that the presence of the Russian military alongside Syrian ground troops and resistance forces is tilting the balance in Assad's favor and this can pose threats to Turkey via its southern border.

There are many speculations as to what prompted Turkey to send its forces across the border to Iraq. Some suggest it has been designed to support Daesh; others say it was part of a wider plot to oversee the breakup of Iraq; still, some others argue it was meant to kill the Kurdish insurgency once and forever.

The following is the translation of a case Mostafa Fahimi, a Middle East expert, made on Khabaronline.ir about the Turkish military buildup on Iraqi soil:

In 2001, eight years before Ahmet Davutoglu took office to take the helm of Turkey’s foreign policy, in a book titled: “Strategic Depth” the current prime minister wrote: “An increase in Turkey’s strategic depth in the region would be possible when Turkey had no problems with its neighbors. Hence, Turkey should move toward a zero-problems foreign policy.”

In the book he also wrote: “Turkey should have a fair attitude toward all regional players and avoid entering any regional grouping or coalition for or against one such player.”

Fence-mending policy in theory; increase in tension with neighbors in action

With Davutoglu leading the foreign policy apparatus of the Erdogan-Gul led governments of the Justice and Development Party, many believed that Turkey would go ahead with a fence-mending policy and would avoid the repeat of the mistakes it had made in the past, mistakes which led to confrontation with Greece, Syria, Iran and some other countries. They also believed Turkey would solve the remaining problems in the Mediterranean and Middle East.

However, it was a short-lived belief and Turkey’s foreign policy squared off against the policies which had been mapped out in Davutoglu’s famous book. Such a strategy did not only not bring about a zero-problems-with-neighbors policy, but sparked new differences with all neighboring countries, thus adding to previous problems.

Turkey first meddled in Iraq’s affairs and then put on the agenda the mobilization of Arab hardline groups against the Iraqi government.

Defeat of the new Ottoman project, Turkey’s embarrassment in the world

In the wake of the Islamic Awakening described by Arabs as the “Arab Spring” and the fall of governments in Tunisia, Libya and Egypt, Turkey pursued its Iraq policy, especially the policy of getting closer to the officials of the Iraqi Kurdistan Region, and watered down its European focus, as it followed a more active policy toward North Africa.

With the “New Ottoman” empire on the agenda, Turkish officials tried to impose themselves on North Africa and put themselves in the limelight through Erdogan’s numerous trips to North African countries.

However, in Egypt, with General el-Sisi’s coup against the then Egyptian President Mohamed Morsi, Turkey’s policy failed spectacularly; consequently ties between Turkey and Egypt sank to historic lows. Their relations have since been at its lowest level.

The level of Turkey’s relations with Libya has been downgraded too and, contrary to Turks’ expectations, there are normal relations with Tunisia. Besides political ties, Turkish producers have suffered, losing their position in the vast markets of the region.

After Abdullah Gul left office, the Erdogan-led government of Justice and Development Party seriously followed a policy of direct intervention in Syria. Qatar and Saudi Arabia sent direct financial aid as Turkey lent logistical and intelligence support to the so-called opposition which carried real or fake names such as the Al-Nusra Front, Jund al-Islam, Daesh, Jaish al-Ahrar and several more other names.

Turkey paved the way for the recruitment of thousands of Daesh forces from Europe and all over the world. It also sent, via its territory, all the military equipment these groups needed in Syria.

It is worth mentioning that all weapons plundered from Gaddafi’s military bases in Libya were transferred to Turkey via sea and from there on to Syria and northern Iraq.

The path to conquer Baghdad goes through Damascus!

When Turkey failed to achieve its goals in Iraq, it resorted to the slogan of “The path to conquer Baghdad goes through Damascus” and carried on with its efforts to topple Bashar al-Assad’s government through constant pressure on Iraq by Daesh and other Ba’athist groups.

The Turks believed they could, in a few months, finish off both the Syrian and Iraqi governments and dislodge their rivals. But what Turkey obtained was contrary to the theoretical strategies of the Justice and Development Party. What was achieved put the Turks at odds with other regional players, and Turkey lost the profitable markets of Syria and Iraq.

Turkey not only failed to achieve its objectives in these regions, but by internationalizing the issue of Syria, Ankara made it more complicated and finally caused the presence of more forces and foreign players in this region.

The continuation of Turkey’s policies made Russia directly enter Syria to practically shift the balance of power to the detriment of Turkey.

Instead of remedying the problems and developing new methods, this time Turkey decided to intensify its confrontation with Russia and shot down a Russian aircraft claiming the aircraft had entered its airspace for a few seconds. By doing so, Turkey practically upped the ante, opening new military and economic fronts and losing Russia’s big market as well as the Russian tourists.

Attack on Iraq, reaction of Turkey to post-JCPOA and post-Daesh eras

In the most recent measure, Turkey, which has failed to gain any tangible achievement other than political and economic damage, deployed its forces to Iraq and took another provocative action in the region.

Under the present conditions, a number of questions pop up: What is Turkey looking for in the region? What methods is it following in its foreign policy? Despite numerous confrontations with others, why has Turkey ramped up its unprecedented anti-Iran rhetoric? Do Turks believe that the policy of “The path to conquer Baghdad goes through Damascus” has not worked and that they need to enter Iraq directly?

It seems that Turkey’s direct move is a reaction to the post-JCPOA era on the one hand, and to the post-Daesh era on the other. Almost ten years after Turkey first began to play the terrorism and Daesh cards in Iraq and Syria, Ankara seems unable to resist international pressures to carry on with its support for Takfiri terrorists. Apparently, it is now thinking of a post-Daesh era, and by that, I mean the military aspect of the terrorist group.

Another question that arises here has to do with the reasons why Turkish officials have concluded that direct military intervention both on the ground and in the air could work in the post-Daesh era. To answer to that question, the following reasons should be explored:

1. Turkey thinks that the presence of the Russian military alongside Syrian ground troops and resistance forces is tilting the balance in Assad’s favor and this can pose threats to Turkey via its southern border.

2. The balance of power in Syria’s Kurdish northeast and along Turkey’s southern border is being upset. Kurdish independence or autonomy in those areas which are run by Kurds allied to PKK is a Turkish red line and poses a grave threat to Ankara. That was why Turkey deployed its military to the Mosul area to threaten the Kurdish opposition and cut their supply lines running through Iraq.

3. Efforts to form an allied Sunni Arab region in Mosul to serve as a security belt in southern Turkey in coordination with Daesh and elements affiliated to Turkey in the region and the subsequent declaration of victory over Daesh like what happened in Sinjar.

4. Ramping up pressure on the Iraqi central government to get more oil and economic concession

5. Lending more support to Masoud Barzani, its ally in the Iraqi Kurdistan Region

6. Taking advantage of Barzani’s enmity toward PKK and setting the stage for a more effective fight against PKK in Iraq.