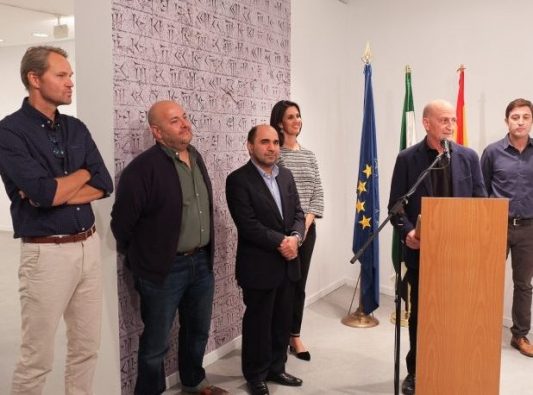 The Spanish city of Badajoz is hosting an exhibition of photos taken from Iran to provide visitors with a better insight of the country’s civilization and historical monuments.

In the opening ceremony, Antonio Franco, Director of the Museum of Contemporary Art of Badajoz, thanked the Iranian Cultural Attaché for organizing such an exhibition. He also highlighted the historical and cultural features of Iran.

A number of Spanish citizens and officials, including the Director General of the Extremadura Culture Department attended the event, according to a Farsi report by IRNA.

Pointing out that Iran has a great civilization that is not known among the Europeans, Franco expressed hope that the exhibition could provide visitors with information on the civilization and historical monuments of Iran.

He also appreciated the efforts made by Manuel Spalio to hold the photo exhibition.

Manuel Spalio, who has provided the photos for this exhibition by making 10 trips to Iran, expressed his pleasure with holding such exhibition, and described Iran as an attractive country with many historical works and hospitable people. He also called on all the audience to visit Iran for sure.

The Islamic Republic of Iran’s Cultural Attaché to Spain, Alireza Esmaili, was the next speaker of the opening ceremony who thanked the Extremadura’s cultural authorities as well as Manuel Spalio for his beautiful photos.

Esmaili also referred to the visit of the Spanish diplomat García de Silva Figueroa to Iran and the court of Shah Abbas of the Safavid dynasty 400 years ago.

“One of the most famous travel books that provides good information about Iran 400 years ago is García de Silva Figueroa’s travelogue, which was immediately translated into French and then was translated from French to Farsi,” noted Esmaili.

He also cited the accounts of the Spanish diplomat of Persepolis, as one of the first and most complete reports on the great ruins of Takht-e Jamshid (Persepolis), saying that it is a full explanation of the historical background of Iran during the Achaemenid period.

Referring to the history of long-standing relations between Iran and Spain, Esmaili expressed hope that holding this exhibition would be a good start for wider cooperation with Extremadura.

Director General of the Extremadura Culture Department, Miriam Garcia, also thanked Iran’s cultural attaché and the photographer Manuel Spalio, saying that for Extremadura, this is a great opportunity to get to know a country like Iran with such a rich historical background.

She also said Extremadura Culture Department is ready for further cooperation with the Islamic Republic of Iran’s Cultural Attaché’s Office.