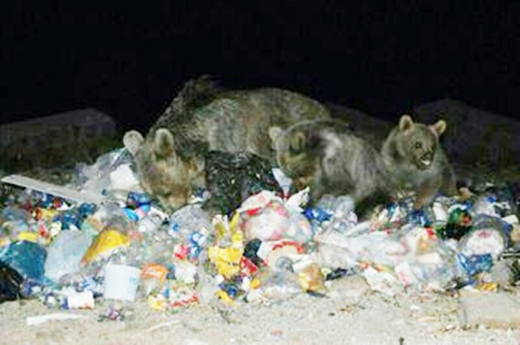 A stack of waste in a mountainous area has lured a mother bear and her cubs to go there to collect food, but environmentalists are concerned about the health of the mammals.

A bear with her three cubs has come to a waste dumpsite close to a mountain campsite to collect food, prompting concerns, among environmentalists, about the health hazards they are exposed to, said an environmentalist.

Khabaronline.ir on August 28 released a report on the appearance of bears in the camping site. The following is the translation of the report:

Hamidreza Nateghian, an Iranian environmentalist, said that a dumpsite near a camping site in a mountainous area in northern Iran has lured a mother bear and her three cubs to go there to collect leftovers, adding that the health of the mammals are at stake because of rotten food and the sharp lids of canned food in the pile of trash there.

He further said since the waste pileup is close to the camping site, there are fears that mountaineers may get involved in close encounters with the bears, adding that serious and quick measures are needed to pursue this case.

We prefer not to reveal the location of this shelter [where the bears have been spotted], because we want to protect them from poachers, the environmentalist said, adding that we have reported the case, complete with its details, to the office of the Provincial Environment Protection Organization and they have vowed to solve the issue.

“Why should we see a trash buildup in mountainous paths? The mountaineers who are always out there in natural environments are expected more than other people to help protect Mother Nature. When they don’t respect the environment, how can we expect others to protect it?”

It is also regrettable that the responsibility to handle and clean up the waste built up in mountains lies with volunteers, and those in charge fail to attend to this case sufficiently and properly, he said.

Nateghian concluded that we hope to see closer interaction between the Environment Protection Organization, the Mountaineering and Sport Climbing Federation, and other related institutes which are responsible in this regard.